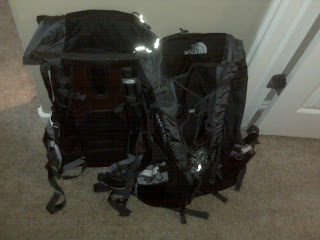 Behold, the North Face Skareb 55l backpacks that will hold our very existence around the globe! We went to the local Sun n Ski to check out a few different packs and, after some testing and deliberating, decided on these. They have an internal aluminum frame suspension that is very adept at keeping a heavy load from bearing down on you. In the store, Indi had me push down as hard as I could on the pack and it felt fine. Huzzah!

55 liters is a little higher than a lot of experts recommended that we go (recommendation was no higher than 50L) for the true ultralight experience, and I believe it – these packs are pretty huge. Indi did a lot of research and had narrowed our options down between these Skarebs and the Osprey Atmos 50. After trying the Atmos, though, it seemed considerably smaller, and less stable, than the Skareb. A little extra room in the pack never hurt anybody (I say from no experience whatsoever!).

We’ve also recieved some our other gear (tent, neoprene Laptop sleeve, shoes, etc.) and we should post pictures/impressions soon.

Live Music. #Tulsa #Oklahoma #downtown #reflection #okbw
Sam picked this up for me today at @idaredtulsa. Happy/sad. I miss this place, and my friend. But so many good memories (and meals) at that counter.
Happy Thanksgiving from mine to yours! Mural at 5th and Peoria in #Tulsa #Oklahoma
Exploring the many towns along #Oklahoma #Route66 isn't just about the Big Attractions but the cool roadside architecture that was once every-day America. I love the style of this old filling station #Bristow! #OK66 #ipulledoverforthis #okbw #roadsideamerica #gas_food_lodging