After relaxing for a day in beautiful air conditioning, we made it safely from the clutches of Jerantut and the East Coast of Malaysia and took the daunting all-day bus ride to the northwest corner of the country and Pulau (island) Penang and the largest city on it, Georgetown.

At the end of our bus ride, we took the ferry across to the island. A short ten minute float later, we got in a taxi and arrived at the New Banana Guesthouse. Accomodations here are good, and we’re staying a week. It’s been nice not to worry about packing for a few days, that’s for sure.

Back in the day, this island was duty free and a very popular spot for Malay and Thai peoples. However, that status was revoked about a decade ago and popularity has ticked down a little. There are a great many pubs and bars, though, to remind folks of their hey day. We found some great little restaurants our first night (including the first Mexican food place since we left home) and were pretty much tuckered out. 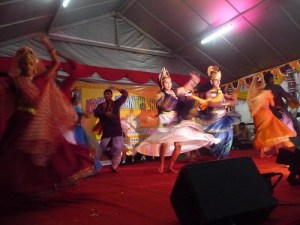 Friday we met up with Ang, a local Couch Surf guy that also happens to be heavily involved with a nearby Chinese cultural center. His clan (family) owns the temple and a school next door. He was all to happy to tell us about the history of the temple, his family, and invited us to his place and the Hare Krishna festival near his home. We were eager to check it out. What we found when we got there was a talent-show-style set up with many people singing, dancing, and participating in various contests. We had the opportunity to see some wonderful traditional Indian dances and hear some classic music sung and played. Have to say, though, it was weird when the ‘Best Dressed’ winners were announced to a bizarre mash up of the themes to ‘Star Wars’, ‘Star Trek: TNG’, ‘Superman’, and ‘Back to the Future’. Whatever had a horn section and sounded grand, I suppose. 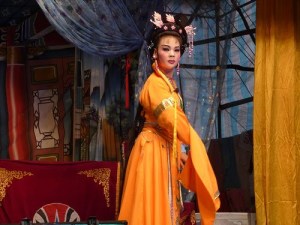 Today brought more culture as Ang invited us to see a local Chinese Opera. Although I can’t understand a word of Chinese (a technicality that will shortly be remedied) it was very enjoyable and, since Ang’s organization runs it, we got to go backstage. Many good pics on Flickr (http://www.flickr.com/photos/rhysandindi). Mid-way through, Ang let us know that a banquet and celebration was underway at a massive hall next door that just so happened to feature a traditional Chinese lion dance. We eagerly rushed over to check that out as well, and were entertained by the teenage performers. Can’t wait to see China first hand.

We’re considering renting scooters to putt around the island, and also would like to see the botanical gardens and ride the funicular up the mountain. Plenty more to do here as time speeds by.