Well, we didn’t rent motorbikes to cruise around the island…but we had a great time anyway!

Yesterday we took the bus ride to Bukit Bendera, otherwise known as Penang Hill. It was here that I rode a funicular for the first time! For those not in the know (like I was) a funicular is a train that is pulled up a hill/mountain by a chain, counterbalanced by another one going the opposite direction. In our case, it was just a single car up and a single car down, but it was still amazing. Some 650 meters higher, we exited to cooler temperatures and a spectacular view of Georgetown and the water dividing Penang Island from the rest of Malaysia. We ate lunch at a hilltop cafe and made it back to the Banana Guesthouse just in time to meet up with Ang and Mr. Gan. 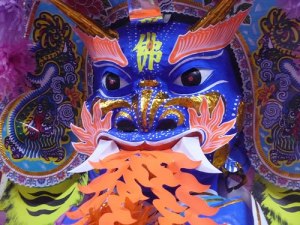 It was also the first day of the Chinese Hungry Ghost Festival. Near the end of August, the Chinese appease the ghosts, spirits, and ancestors that come out from the lower realm. Many offerings are presented, from food, to incense, to ‘Hell Money’, all burned or presented in shrines. Some folks even leave beer at shrines, as Ang said, “Even ghosts need entertainment!” Some folks even prepare full meals for empty place settings in honor of loved ones who are gone.

When we arrived at one of the main shrine areas, Ang had a surprise for me. Several of the local papers wanted to do a write up on the Ghost Festival, and the keystone of their story was to be an interview with foreigners and their thoughts. Indi and I talked to a few reporters from several newspapers about what we knew/didn’t know about the Ghost Festival and the differences it has with Halloween. It was a whirlwind, especially the part where the photographers put us through some paparazzi-esque sessions holding some ‘Hell Money’ and having our photo shot about 1,000 times. Truth be told, it made me want to invest in a beginner DSLR camera. 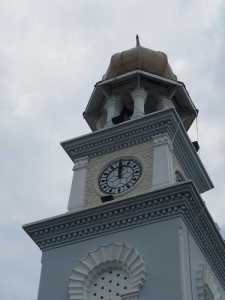 Today, Indi stayed in and read some of her new books while I took a walking tour of the historic district. I think my favorite thing to photograph are clock towers. Must be my love for Back to the Future. Hearing them chime fills me with child-like GLEE. This evening we joined a local CouchSurf party and met some folks from Poland, Germany, and Hong Kong. We also said farewell to our friends Ang and Mr. Gan. Even though we’ve only been here a week, it feels like so much longer.

Tomorrow we bus to the Cameron Highlands, a region in the hills (cooler weather, yay!) with strawberry fields and tea plantations. I’m highly looking forward to it.