Long version: At around 8:45 this morning (after a too-short breakfast due to my poor wake up skills) Indi and I left in a caravan of Land Rovers to start our day-long tour of various nature areas in the Cameron Highlands. It was broken up into several parts, so it seems only logical that I break this post down the same way. 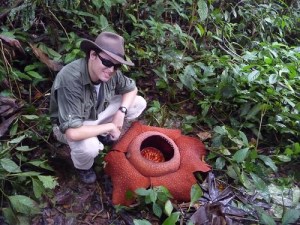 Our first stop was a two hour trek in the jungle in search of the largest flower in the world: The Rafflesia Flower. The indigenous peoples of Malaysia (the ‘Orang Asli’) have a small village whose entire job is to trek in the jungle and find the flowers, as they only last a few days after blooming. Before we actually GOT to the walk, though, we had to 4×4 it through some treacherous dirt (mud) roads up some backwoods hills. It was exhilarating! I can now say I’ve ridden in a Land Rover in it’s natural environment. I highly recommend it…providing the vehicle has seat belts, else you’ll bump your noggin.

After that bumpy ride was the long walk. It was more strenuous than we expected and the whole time I slogged through the forest I could hear Richard’s letter echoing in my mind. He wisely advised us to get in shape, as the Earth is not forgiving. I should’ve listened.

Anyway, I finally made it. We saw a four-day-old Rafflesia, an older rotting one, a few buds, and a two-day-old flower. They were all amazing and it was totally worth the walk. I say that even though half-way back to the Rovers it started raining. Indi and I were totally soaked and muddy by the time we got back to the vehicles. 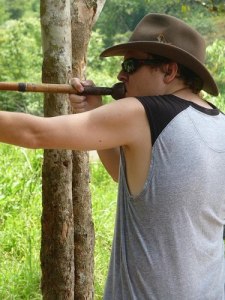 The small village was at the base of the mountain we drove up, so all we had to do was drive down. However, since it was raining pretty good the road had become even more treacherous. Our Rover drove down first, testing the ruts and moving rocks. It was even more exciting, especially considering we made it down in one piece.

The Orang Asli live in scattered villages throughout the country. They are modern, not tribal, and one of the guides estimated that in another 10-15 years their system of villages, language, and ancenstral knowledge will be completely gone. This is due to the children all attending school, becoming educated, and moving to cities. The elders still retain the knowledge of their heritage, though, and we got to see and use one of their weapons: the blowpipe.

It’s a simple bamboo rod with a dart and wild cotton wadding. The hunters use poison to kill their prey. I gave it a shot (literally) but like a poor marksman I missed the target. The villagers sell hand crafted blowpipes (smaller than the one I used, but no less authentic) and we picked up a few. We won’t be able to buy them again, as they are not sold outside of the village but we will have a few on our next inventory shipment.

A relaxed lunch later, we drove to the BOH Tea Plantation. I cannot accurately describe the beauty of a tea plantation, so I’ll show you: 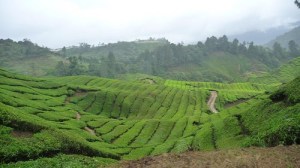 We were both blown away. I had no idea what tea looked like in the ground, and the landscape of puzzle pieces seemed too outrageous to be true. It’s one of the most beautiful landscapes I have ever seen. We also got a brief tour of one of the elder factories and had some fresh tea in their cafe. Sitting on the balcony, sipping my hot tea and looking out at the segmented sea of vibrant green was incomparable. I wish I carried that peace with me all the time. 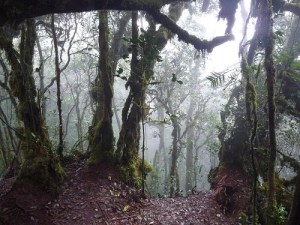 Our final stop took us to the top of the highest peak in the Cameron Highlands and through another forest. This walk was much smaller, half an hour total, but it was truly amazing. It looked like we’d stepped into Middle Earth. Everything was covered in moss. The trees and vines were ancient. A fog had rolled in to add to the effect.

As we walked along the rudimentary path, we could see the earth literally breathe as the spongy moss gave and took from our footsteps. Dew-laden branches and leaves greeted our grip as we climbed over fallen trees and spider-webs of roots. It was quiet. No birds, bugs, animals. I felt like I was on another planet. Our guide for this part of the trip was very knowledgable on the local flora and stopped often to show us a flower, leaf, or branch and talk at length. We learned a lot!

We are very tired now. During the first walk, I overdid it a little and my poor body is taking me to task for abusing it. A light dinner, plenty of rest tonight, and a relaxed day tomorrow should get me back in good graces with myself.