Spending time with the children here has been a favorite experience of my life. (Boy, that sentence is clunky…) They are eager to spend time with anyone and eager to share what they know and what they do.

Many people here are excited to see a foreigner. For the last two days, I’ve ridden a dozen or so kilometers out of town to some of the local schools that New Futures supports. One of the projects that needs work is a write-up on each school for potential donors and other interested parties. I’ve been hosted by Mr. Ken, the school coordinator, and his 100cc motorbike.

Mr. Ken is in his mid-thirties and speaks the best English of anyone I’ve met in country. He learned English in his late teens in secret, as it was illegal to learn the Imperial language at that time. He has ten siblings and many in his family has moved out of Cambodia; he himself has traveled extensively. He is dedicated to providing a better life for the children and his passion is fierce.

Cambodia provides public school to it’s citizens. However, many children live in rural villages that are several kilometers away; they also work on the family farm helping with rice harvest or taking care of livestock. Coupled with the lack of transportation, the rudimentary roads, and that most families live at the subsistence level, many children do not attend. NFO set up schools in the local villages and sets their hours at times where the children are less likely to be doing important chores, thus providing an education to those that would otherwise miss out.

Riding on the back of a motorbike on rural Cambodian roads is an experience all to itself. People follow you with their eyes, some with amazement, others with curiosity, but all with smiles. If I wave, everyone waves back. Children run after us screaming, “HELLO!” in hopes of getting a response. I’ve not run into a single beggar since leaving Siem Reap. People seem mostly happy with what they have; it’s what they know.

Some of the most beautiful scenery in the world exists on the side streets and dirt paths in rural Cambodia. Rice fields stretch as far as the eye can see, littered with an occasional coconut tree or a cluster of banana trees. Houses dot the landscape, quaint in their architecture and simple in their purpose. When the sky is blue and the sun is shining, it’s the most radiant green. When the sky is dark and the clouds are rumbling, it is just as beautiful but in an entirely different way.

Tomorrow we say goodbye to our friends and the children. It’s gonna be a hard goodbye. 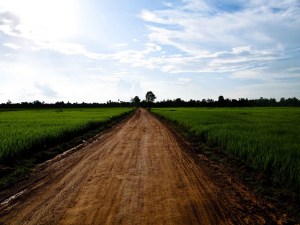