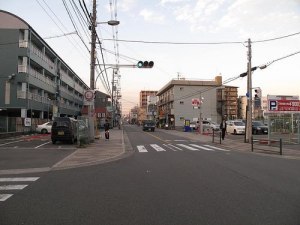 Yesterday we arrived at Kansai Int’l Airport at WAY too early in the morning from our red-eye flight. When we stepped out of the airport (which floats, by the way) we were instantly in an entirely different world. For one, it was about 60F, which felt GREAT. For another, everything was clean, crisp, and looked brand-new. We boarded the train and headed into Osaka proper.

I was struck by how quiet everything is. The trains run SILENTLY. The crowd of morning commuters crushed in around us and were quiet. It was a little unnerving how so many people could be so quiet. Indi’s Japanese has already proven invaluable as we’ve asked a few locals for directions, and they’ve been eager to oblige. We found our guesthouse without too much trouble and settled in for a long nap.

The evening was spent by walking around our local area, doing a little grocery shopping, and dinner. The grocery store was quite nice, with a near-western amount of selection and some CRAZY items. Since our guesthouse has a full kitchen at our disposal, we’re looking forward to saving money by self catering when we can. I had some more new foods for dinner and generally just gawked at our new surroundings. This place is seriously an OCD person’s dream: everything is clean, organized, and where it is designed to be. Even vacant lots are well tended. 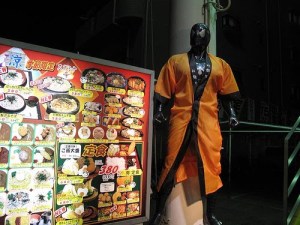 This morning we took a nice walk to 7-11 (one of the only locations in town that has an international ATM) and enjoyed a quiet Japanese morning. I’m not sure where Osaka hides everyone, but it’s been mostly quiet when we’ve ventured out in our immediate area. I’m also considering buying a used bike or something similar, as many others have done the same and it seems to be THE way to get around here. They are whisper-quiet too.

Indi has been very joyful the entire time. It’s been a homecoming for her and we’re excited to take a few day trips to her old stomping grounds outside of town.

Rhys Martin was born in Tulsa, Oklahoma in 1981. In 2009, he sold everything he owned and left the country, living out of a backpack for ten months. He discovered a passion for photography while traveling throughout Southeast Asia and Europe. After returning home, he looked at his home town and Oklahoma heritage with fresh eyes. When he began to explore his home state, Rhys turned his attention to historic Route 66. As he became familiar with the iconic highway, he began to truly appreciate Oklahoma’s place along the Mother Road. He has traveled all 2,400 miles of Route 66, from Chicago to Los Angeles. He has also driven many miles on rural Oklahoma highways to explore the fading Main Streets of our small towns. Rhys has a desire to find and share the unique qualities of the Sooner State with the rest of the world. Cloudless Lens Photography has been featured in several publications including This Land, Route 66 Magazine, Nimrod Journal, Inbound Asia Magazine, The Oklahoman, and the Tulsa World. In 2018 he published his first book, Lost Restaurants of Tulsa. Rhys loves to connect with people and share his experiences; ask him about enjoyable day trips from Tulsa, locations along Route 66, and good diners or burger joints along the way.
View all posts by rhysfunk →
This entry was posted in Japan, Old Travelogue. Bookmark the permalink.