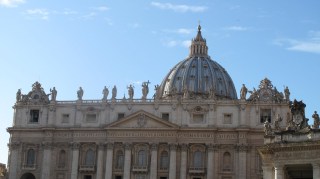 Being back in Italy again is a strange feeling; one I’m sure Indi knows all to well from being in Japan after so many years.  For those unaware, I spent 10 days on a quick guided tour of Italy back in 1995 with some other kids, visiting Rome, Asisi, Florence, and Venice.  We only get ten days this time, too, though I’m happy to be sharing it with someone rather than wandering around completely alone in a group of strangers.

The flight from Osaka to Rome had a stop over in Beijing, and though I’m sad not to see China, the experience at the airport and the flight is enough to make me not want to go back to China at all.  People were rude, prices were REALLY expensive (and we had just come from Japan!), and nobody knows how to queue.  The flight was full of noisy children.  But we made it and took the train from Leonardo da Vinci airport to central Rome under a canopy of cold moonlight.  After some confusion on the bus, we even made it to our CouchSurf hosts in good order. 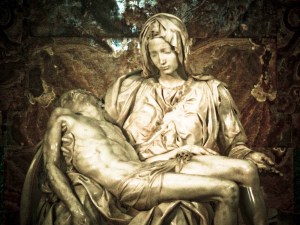 A great night of sleep later, we set out for Vatican City.  I was surprised at how much I remembered…and what I had totally forgotten.  Names of places were gone or confused, but little side-streets were just like my memory held.  The grand beauty of St. Peter’s Square and Basilica really cannot be expressed adequately except that it’s one of the most grand holy places I’ve ever been.  When we were walking through the papal tombs below, I paused for the new space now occupied by John Paul II.  It was really rather quaint compared to some of the ancient, grand tombs.  At one point I walked past a large glassed-in room that was made entirely out of colored marble.  I reflected on the beauty and didn’t see the sign.  Indi walked up and gasped.  When I looked at her quizzically, she pointed to the sign stating that this was the final supposed resting place of St. Peter himself.  You know, the Apostle.  Wow.  How did I miss THAT last time?

After we ventured through the basilica and the surrounding area (including the fortress Castle of St Angelo) we crossed the river Tiber and explored some of the old district.  This includes several familiar piazzas and the Pantheon.  The first place we stopped was the Piazza Navarro, home to the Fountain of the Four Rivers and an impressive baroque (don’t fix it) church.  I was saddened to see the square that was filled with simple artists and fruit vendors fourteen years ago has turned into a carnival midway with a carousel and permanent salesmen.  I had purchased a fake Hard Rock Cafe: Roma shirt all that time ago and now there were none to be had.  Ah, well.  Times change.  We wandered a bit, saw a living statue (but no crusty jugglers), and headed to the Pantheon.

The Pantheon is still my favorite building in Rome.  It is as grand as it is simple, and since it is surrounded by normal buildings it jumps at you out of nowhere.  We walked around inside a bit, saw the large hole in the ceiling, and scoffed at the McDonald’s outside.  Indi was especially excited when I pointed out the obelisks throughout town, including the one in front of the Pantheon, had Egyptian hierglyphics on them.  She has mentioned that Rome is everything she expected Europe to be, and more.  It feels like a Disney attraction or movie set in it’s perfect capture of the European stereotypical style.

We also walked to the Spanish Steps, which we expected to be super crowded but the cold rain kept most of the tourists away.  It’s at this point I must mention food.  Last time I was here, I seem to remember sustaining myself on a diet primarily of Teddy Grahams and potato chips, which I’d brought with me.  This time I’m experiencing the culinary delights of Italy.  My mother would be proud.  I’ll save that for my December New Foods post though. ^-^

After such a long first day in Europe, we decided to save the Colosseum and Roman Forum area for the next day.  And so I’ll leave that for the next post, too.