Skip to content
rhysfunk Ireland, Old Travelogue January 20, 2010December 22, 2016 3 Minutes
After our long day walking to the cliffs, we thought it would be a good idea to stay close to our hostel and give our aches a rest.  Though we have been traveling for awhile now, we are a bit out of practice on long walks over hilly terrain.  Richard’s Letter strikes again.
At breakfast, I asked Carmel (one of the owners) about the old church across the road a ways.  She told us how to walk there and, since I could see it from my window, it shouldn’t add to our walk woes.  So after downing some toast and cereal, we took the ten minute walk to Killilagh (pronounced Kill-aye-lah) Church.  Built sometime in the 15th century and torched by Cromwell some two centuries later, it was converted into a burial ground.  There is also MacNamara Tomb next to the churchyard, which also served as a jail at one point.  Talk about a creepy place to get tossed after a night of drunken tomfoolery.

When I first laid eyes on the overgrown cemetery I was filled with a sense of wonder and amazement.  Grass had long overtaken most of the plot and even the church itself was only half remaining.  Looking closer at some of the headstones and slabs revealed a range of dates from the late 1800s to the 1940s.  There were Celtic crosses of all sizes and levels of ornate design.  The inside of the old church building had graves as well, and a single belfry reached into the sky on the western wall.  It felt peaceful.  Which I suppose is the best compliment a graveyard can get.
We then approached the tomb.  It had a small, worn path to the main door and was surrounded by a rotting and rusty fence.  I walked to the door and hesitated.  Indi gave me trouble for my sudden superstition, as it’s not like me.  But I tell you this: things change when you’re actually standing at the door to an ancient tomb, considering a look inside.  My sensibility won out (coupled with Indi’s support) and I checked inside to find…nothing really.  An old piece of wood and some blank stone walls.  Anti-climactic.  Better than the opposite, I guess.
Once through, we thought we might head down to the shore.  After all, it wasn’t far, and the rock formations looked interesting.  Plus we could stop by the pub on the way and I could have my first taste of Guinness.  Ah, yes.  Excitement!  I hadn’t tried the famous Irish beverage before and Doolin seemed the place to rectify that.  I’m pleased to say I enjoyed it.  Guinness is to beer as strong coffee is to soda.  At least I know that if I accidentally tipped over the glass, none of it would spill out.  After another decent stretch of the legs (it was farther than we remembered) we found ourselves at the shore of the Atlantic Ocean. 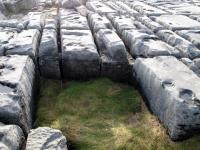 The rocks around Doolin Pier are STRANGE indeed.  It’s a big table of mostly flat rocks, with some sheer edges.  It’s mostly pitted from the water and there are long cuts and gouges in the rock that look to have been caused by a giant knife.  They are everywhere and curiously uniform in design.  There is also a small island off the shore with the remains of an ancient constabulary.  Farther in the distance, one of the Aran Islands can be seen.  Sadly, there are no ferries this time of year due to the lack of tourists and roughness of the waves.  Speaking of lack of tourists…
Doolin is very much a spring/summer town.  It’s the winter, and a majority of the businesses are closed.  It’s strange to walk down the street and see restaurants, hostels, hotels, and shops all closed for the season.  There’s a lot that we are missing, but I feel we’ve gained more by being able to experience the town and its people with less interference.  And the weather’s been just fine for the most part.
It was a good day; a productive day.  Though we DID manage to walk about three and a half miles when we’d planned on resting.  It all worked out though; the following day was rainy and windy.  Perfect for resting next to a fire with a book.

2 thoughts on “Killilagh Church and the Atlantic Ocean”