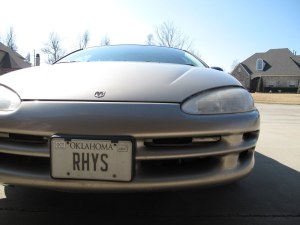 So, it’s been a week since we rolled into Tulsa and back into the land I know.  What’s been going on with us?  A lot of visiting of friends and family, coupled with many occasions of too much food.  And some shopping.

Indi’s Dad and stepmom have been wonderful hosts and have helped facilitate our slow re-integration into the life we once knew.  I already mentioned the grapple I received from my mother in my previous post, and since then it’s been go-go-go.  The most overwhelming thing about being home continues to be the food.  I am still not used to the portions, nor do I want to be.  Any time Indi and I have split up for the day and ended up eating out somewhere I am sad that I have no one to split a meal with…and I typically end up eating more than I should.  This must stop.  I don’t want to undo all of my hard work! 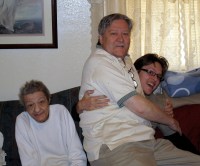 Yesterday we both got in the car and drove the sixty miles to Pawhuska, OK.  We had a nice visit with my ailing grandmother and my father, both of whom seemed to be in great spirits and were very happy to see me.  Grandma Gail has leukemia and, to be honest, I was greatly concerned that I wouldn’t be able to visit her when we returned home.  I am supremely thankful for the additional time I get with her and plan on making regular visits.  After all, she doesn’t have a computer and I gotta show her my 8,000 pictures too!  Plus I would very much like to do a better job at photographing the deflating rural town.  The entire Highway 11 journey from Skiatook to Pawhuska holds so many memories for me.

I have also noticed that I look at things a little differently.  There is SO MUCH open space in Oklahoma, so much so that it’s nearly suffocating.  I’m used to compact environments and walkable towns.  I wish I didn’t have to drive everywhere.  It’s also very easy to fall back into the same old ruts I was in when I left.  Hungry?  Get some fast food.  Walking?  Meh, maybe later.  Want to go out?  No, I’ll just stay in this evening.  It’s going to take a bit of effort to apply my new outlook to my old confines.

Today is a big day; we move back into our home.  We moved out in July of 2008 and I don’t even remember what it feels like to live there.  I’ll be sure to let everyone know how that goes…

Rhys Martin was born in Tulsa, Oklahoma in 1981. In 2009, he sold everything he owned and left the country, living out of a backpack for ten months. He discovered a passion for photography while traveling throughout Southeast Asia and Europe. After returning home, he looked at his home town and Oklahoma heritage with fresh eyes. When he began to explore his home state, Rhys turned his attention to historic Route 66. As he became familiar with the iconic highway, he began to truly appreciate Oklahoma’s place along the Mother Road. He has traveled all 2,400 miles of Route 66, from Chicago to Los Angeles. He has also driven many miles on rural Oklahoma highways to explore the fading Main Streets of our small towns. Rhys has a desire to find and share the unique qualities of the Sooner State with the rest of the world. Cloudless Lens Photography has been featured in several publications including This Land, Route 66 Magazine, Nimrod Journal, Inbound Asia Magazine, The Oklahoman, and the Tulsa World. In 2018 he published his first book, Lost Restaurants of Tulsa. Rhys loves to connect with people and share his experiences; ask him about enjoyable day trips from Tulsa, locations along Route 66, and good diners or burger joints along the way.
View all posts by rhysfunk →
This entry was posted in Old Travelogue. Bookmark the permalink.