It was one year ago today that I hugged my mother and we set out in Brad’s Chevrolet van into the great unknown.  To quote Doc Brown, “My God, has it been that long?”  It also feels like last week.  Some things have changed, others haven’t.  The world seems to have a way of trying to force things back into their old familiar ruts.  It’s my job to make sure that doesn’t happen.

I remember my last day at AT&T, and Indi remembers hers.  She starts back at the call center on May 3rd and I’ve applied for a few positions.  Our dwindling bank account snuck up on us and bills gotta be paid.  It’s strange how, when we were abroad, we never worried about money; we had a set amount that we knew would mean it was time to go home.  Once we got home, we didn’t worry about it as much; yet I worry about money more here than I did anywhere beyond our borders.  That bothers me.  I need to re-discover the peace I knew when I was in unfamiliar surroundings.  I also feel useless when I’m unemployed.  I felt so accomplished last weekend when I got some yard-work done (I HATE YARD-WORK)…it just felt nice to get something done.

We got a dog a few weeks ago from the Broken Arrow Animal Shelter.  She’s a six month old Shepard mix, and adorable.  We named her Penny (a simultaneous reference to LOST, Big Bang Theory, and The Beatles) and she cheers me up on a daily basis.  I’m not even in a bad mood and she makes me feel better.  Playing with her in the back yard brings me a sense of unmitigated joy, on both our parts.  I really missed having a dog.

I felt like I was in the midst of winter the entire time we traveled.  Southeast Asia is always warm; but New Zealand, Japan, and all of Europe were quite chilly during our stay.  I love hopping on the scooter and going for a ride, or going out at night and not having to wear a jacket.  I’m sure this thankfulness will turn to bitter complaining once the infamous Oklahoma humidity sets in.  I also need to take greater advantage of my mornings.  I am slowly returning to my late morning wake-up schedule that ruled my life for so long, and I love my mornings.  I’ve also gained five pounds.  I can kill several birds with one stone if I start getting up earlier and going for walks.  It’s just SO EASY to return to the old ways, even after a change as jarring as the one I experienced. 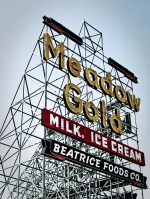 I have made a point to get out and get some local photography done.  For every picture I take, there’s another picture I can no longer take due to time and the changing geography of Tulsa.  How many memories are completely gone now that I have nothing to remember them by?  I have had the chance to share the world with people back home, and now I need to share home with the people I’ve met around the world.  I plan on taking a longer trip to Barnsdall and Pawhuska (Mom and Dad’s hometowns) and happily take suggestions if you know of any other interesting places around Northeast Oklahoma.  I have plenty of time at the moment!

One thought on “One Year Later”