Living in northeast Oklahoma doesn’t give me a lot of opportunity for short jaunts to fantastic places.  If I want to go to Dallas, Texas, it’s a five hour drive south.  About the same distance north is Kansas City.  That same distance again east or west will greet me with plenty of small towns, but nothing of great historical significance or remarkable fame.  However, sometimes, the history comes to us.  Such was the case yesterday morning as an honest-to-goodness steam locomotive made a brief stop in the small town of Wagoner, Oklahoma.

The Union Pacific 844 steam locomotive was completed in 1944 and, as far as I know, is the ONLY steam train still running today.  It makes occasional, but rare, trips around the country for various functions for the railroad.  I read about it on a local news website a few weeks ago and marked it on my iPhone calendar.  Friday night I was chatting with one of my friends when I arbitrarily checked my calendar and saw my note.  I asked if he wanted to go at about 1 AM.  Seven hours later, I picked him and his nine year old daughter up and started the road trip.  We stopped in Catoosa, OK for a quick breakfast at Waffle House (where I redeemed my free-waffle-on-your-birthday-month coupon!) and set out on the highway.  It took us about forty-five minutes to reach the small downtown of Wagoner, population of about 8,000.

I used to drive through Wagoner quite regularly in the summer with my friend Jared as we were en route to his cabin at the lake.  I hadn’t been through in quite some time, and not much has changed.  It didn’t take long for us to find the old Union Pacific rail station, boarded up and dilapidated next to the railroad track.  For one thing, there were dozens of cars and hundreds of people waiting on the arrival of the historic train.  Curious residents, model train enthusiasts, historians, people from all around were eager to greet the iron horse when she arrived.  We timed it pretty well; we’d only been there for about twenty minutes before we could hear it in the distance.

As the train came into view and began to slow to a stop, my face broke out into a grin that could hardly be contained.  Here was this WWII-era train, once a symbol of America’s prosperity and growth, coming to a stop in front of ME.  The engineer blew the whistle and it nearly knocked me down.  When the train came to a full and complete stop, nobody moved.  Was it safe to approach this unfamiliar behemoth?  I walked up and started taking some pictures, and I was thankful for the few moments of uncertainty.  Before long the train was swarmed with onlookers.  The three of us walked around the engine and marveled at the beauty of this beast.  Four-hundred and eighty-six thousand tons of locomotion lie dormant at our fingertips.  It was unreal. 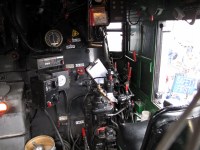 The train stayed that way for about a half hour.  They made some adjustments to the locomotive and talked with some of the more enthusiastic gawkers.  I walked up and marveled at the gigantic wheels of the train.  They were as tall as I was.  I convinced one of the engineers to take a few pictures of the cab with my camera.  It’s amazing how many dials, gadgets, handles, knobs, levers, and other apparatus are required to run a train.  After all, it just goes down a track, right?  How about just a ‘forward’ button and a ‘stop’ button?  I guess I’m just used to the computer age.

After a too-short pause, the whistle pierced the morning air once more to let us know it was time to move on. Everybody cheered as the train slowly moved forward.  Now, if you’ve seen many locomotives in movies, you know there’s a moment when it gets going where the wheels spin fast ’till it catches the track and everything matches.  Well, when that happened, the entire ground shook.  I was immediately humbled by the power of the train and was hit with a pang of sadness that this marvel was the last of it’s kind.  We waved until the train steamed out of sight.  I hope that is not the last time I see it.

Video of the Train Leaving