Food is important in my life.  I have met people that eat tiny portions and only when they absolutely have to; I cannot relate to these people.  I love to eat.  Not only that, but I love to eat food that is BAD for me.  I also tend to eat faster than I should, which means I eat more than I should.  It’s a terrible way to live, but it’s been the hardest habit I’ve ever had to break.  Traveling the globe helped a lot, but it’s difficult (as I’ve mentioned before) to stop it altogether.  With that in mind, please understand that when someone challenges me to eating a particularly egregious piece of American fast food, I cannot decline.  When my friend Billy challenged me to a meal of Kentucky Fried Chicken’s new ‘Double Down’ sandwich, it was no different.

Let me also say that I’ve known about this sandwich for some time.  I believe I was in Cambodia last October, browsing the web when I happened across an incredulous CNN article talking about this new sandwich that had debuts in a few test markets.  The article was quite sure the sandwich would fail and laughed at the Colonel’s poultry empire for even trying.  Even then, I remember looking at the specs for the food substance and seeing exactly what the rest of the world thinks of when they think of American eating habits.

This sandwich can hardly be called a sandwich at all.  If you are unaware, the Double Down removes the bread from the equation and replaces said bread with two pieces of fried chicken.  Between those chicken bits are two kinds of cheese, bacon, and some kind of sauce.  There is no way this was NOT thought of in a mad scientist laboratory.  Yet it was successful, and was launched nationwide earlier this year.  I’ve been thinking about ordering one and documenting the experience, but never quite got around to it…probably on purpose.  This brings me to last night and the food challenge.  Billy brought over two sandwiches, one for each of us, and a bonus foodstuff known as a ‘Cheeseburger Roller’ from a local convenience store.  Think of a hamburger shaped like a hotdog.  They look awful, but I understand the commercial appeal:  the famous Quiktrip hotdog buns will work for both items and they can be used on the same warmer rollers that the Hot Dogs and Taquitos are placed on daily.  I get it.  It just looks terrible. 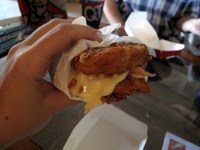 We went for the rollers first.  It honestly wasn’t much to write about; it tasted like any other convenience store burger, only in a different shape.  I was unimpressed, but not revolted.  I count that as a win.  Shortly thereafter, though, it was Main Event Time.  I took my ‘sandwich’ out of the box and looked at it.  It was wrapped in paper, since the grease absorption factor of bread was no longer available.  The cheese looked, as my friend Nikki put it, like ‘cooling paraffin wax’ and had a texture not unlike a melted candle.  The bacon was non-existent, swallowed whole by the two pieces of chicken that were staring me down, laughing at my fear.  I sighed, said a small prayer (seriously) and went in.

Sodium.  The first sensation I had was a jalapeno-strong sense of burning from the sodium.  The breading was salty, the meat was dry, the cheese was processed; hell, the bacon was a RELIEF from the rest of the salt.  I was aghast at this new sensation.  I like salt quite a bit, and it was like getting hit over the head with the Salt Hammer of Thor.  I looked over at Billy and he was having a similar reaction.  Our friend Nikki tried a bite and was immediately sad.  Still, a challenge is a challenge.  Billy and I continued.  Billy seemed to have more of an issue finishing his sandwich, as I finished mine at a fairly good clip.  All in all, not as bad as I expected.  Super salty and an unnecessary amount of meat (I really missed the bread, too…).  I considered the challenge over.

About 45 minutes later, I realized the ‘meat-glorb’ (moniker courtesy ‘The Chicago Tribune’) had not moved.  Billy described it as an ‘angry brick’ and I’m having a hard time describing it otherwise.  I had this heavy weight situated just behind my ribcage that was going nowhere.  On top of that, I could feel my energy draining as all of my resources were being diverted to break down this terrible anvil in my belly.  I actually started sweating.  This is not the kind of exercise that I need.  It wasn’t until several hours later (and many glasses of water) that I started to feel more stable and by then I was drained of energy.  Bedtime.

After my recovery period this morning, I took a gander around the web and see that, according to KFC’s figures, the sandwich isn’t as bad as many other ‘normal’ options at other fast-food joints around.  Check out http://www.fivethirtyeight.com/2010/04/double-down-by-numbers-unhealthiest.html for a good breakdown, the guy is really good with numbers.  And the fact that this amazingly bad sandwich is BETTER for you than some of those other options says more about the fast food culture than I ever could.

One thought on “An American Food Travesty”