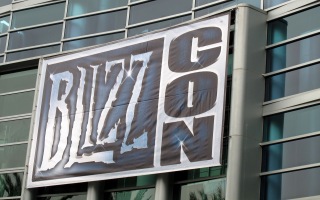 You know that feeling when you can’t stop grinning?  That’s me.

Today was registration day at Blizzcon.  Before I really get into it, I want to tell you what Blizzard Entertainment is to me.  It’s a video game company.  I started playing their games in 1993 with the release of Rock ‘n Roll Racing and The Lost Vikings on the Super Nintendo.  In 1994, my love of their company solidified with the release of the first Warcraft RTS game.  This was followed up with Warcraft II, Starcraft, Warcraft III, and finally World of Warcraft in 2004.  I’ve been playing WoW since Valentine’s Day 2005 and it has been a decent part of my life, both as a social medium and a bonding experience.  Needless to say, I’ve been involved with Blizzard products for a long time.

The day started when I arrived at Denny’s near the convention center at about 9:20 this morning.  In the last few days, I had reached out on the Forums and in one of the chat rooms dedicated to Blizzard fans.  I learned about the Denny’s gathering and showed up a total newb; my confusion was evident, as a booth of gamers invited me and introduced themselves.  By the time breakfast broke up about two hours later, I’d met six or seven people including a woman whose picture I’d taken at Dragon*Con back in September.  It’s a small world, is it not?

After breakfast, we all headed over to the Anaheim Convention Center to wait in line to register and get your badge + goodie bag.  I didn’t need to register, as I was a guest at a charity dinner later in the evening, but I hung out with the Denny’s folks and a group of fellow solo travelers that had created their own group on Facebook and I’d joined in on.  In the four hours I stood, sat, and walked in and around the line, I grew more and more incredulous at the size.  Two hours before the doors opened for registration, the line took three and a half minutes to traverse.  By the time 4:00 rolled around, it was thrice that size.  When the moment finally came, and the doors opened, we were greeted with a basement full of doubled-back lines.  I joined in the experience, talking amongst fellow gamers and having a blast.  Once everyone registered, we went outside, chat a bit more, and then all went our separate ways.

While the other groups had parties and gathering to attend, I straightened my vest and headed to a ballroom at the Hilton to take part in the charity dinner that I had the opportunity to attend.  I went in at 6:00, got my name badge, and walked into a grand room with scattered tables.  There was an open bar and tons of food.  I wandered briefly before noticing some of the folks didn’t have name badges like mine, but sticky name tags. These folks worked for Blizzard.  I spent the next four hours chatting with Blizzard employees, from game designers to artists to producers to composers to developers to founders.  I didn’t know anyone’s face or name, and I stood back for a bit.  One of the Blizzfolk came over and introduced himself as Brom.  In addition to looking a heck of a lot like Jeff Bridges, I learned that Brom was a graphic artist and he introduced me a group of his artist and designer friends.

The rest of the evening was similar.  I’d walk up to someone, introduce myself, learn about them, and they’d learn about me.  What games do I like?  Why?  What else do I do with my time?  What brings me to BlizzCon?  These all led to wonderful discussions about my passion for Blizzard, my love of gaming in general, and genuine interest in my Customer Service career and world travels.  I felt like I was part of a family, and everyone was really happy to be a part of the experience.  EVERYONE got really excited when I said it was my first BlizzCon.  I am also really excited, and though I don’t know what to fully expect tomorrow, I have no doubts it will be unforgettable.

So tonight I go to bed with some blisters on my toes (stupid boots) some new friends in my phone and online, and a host of great stories from some amazing individuals.  Now…I sleep.