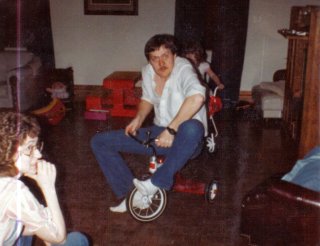 It’s strange how I can have the exact same thought or say the exact same words and get entirely different reactions.  For example:  I have a picture on my desk at work of my family.  Mom, Dad, Tyler, and I at Grandma’s funeral service this past December.  I’ll look over at it occasionally, and sometimes I’ll say, “Miss you, Dad.”  I’m okay.  It’s just a fact.

I went out for my lunch hour at six and was greeted by a beautiful sunset.  The heavy snows are well into melting mode and the beautiful orange and blues of the dusk were reflected in the dark parking lot puddles.  I got in Dad’s car and sat there for a few minutes. “Miss you, Dad” and it hurt a lot more.  As far as I’m aware, Dad wasn’t particularly bowled over by a pretty sunset, but I certainly appreciate them.  I’m not sure why it was one of those moments that had such an effect.

Given the transitional nature of my last month, I’m continuing the trend by preparing to move into a new home.  The one-room efficiency has treated me well, but for a variety of reasons (some new, some old) I need to get a slightly bigger place.  It’ll be nice to have a place for Dad’s things as well as a safer place to park his car.  I like having company and this will allow all of those things to happen.  Same neighborhood, too.  A promotion at work has helped make this move a reality.  Timing is everything, and I still believe everything happens for a reason.

I’ve been making a concerted effort to NOT just stay at home.  Though the past week was spent at Indi’s apartment due to the snowstorm (I still had to get to work and the neighborhood street was AWFUL) the time previous and since I’ve caught myself just wanting to go home and turtle, but I’ve worked to avoid that.  Thank you to the friends that have helped keep me afloat.  I think I’m doing fine most of the time, but when the time comes and I need you most, I always have someone to reach out to.