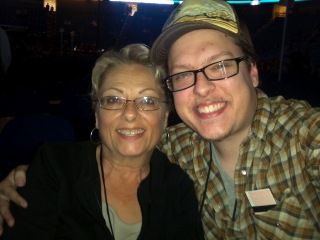 This past Saturday, I finally made good on my Christmas gift for my mother and took her to see Roger Waters perform ‘The Wall’ live in Tulsa.  I’ve always been a Pink Floyd fan, but I always defaulted to Dark Side of the Moon over The Wall.  Don’t get me wrong, I appreciated the grandeur of the semi-autobiographical double album of 1979, and the bizarre animated film that it begat, but I never looked too deep into it.

Until this past weekend, that is.

Mom came over to the house at 5, dressed nicely and very excited.  We went out to dinner first at Kilkenney’s on Cherry Street.  We ate there last Mother’s Day.  We had a nice meal, talking about all sorts of things, and then went to the BOK Center downtown.  For Mom’s big Christmas gift, I’d purchased two VIP tickets to the show.  It not only afforded us floor seats, but a nice little goody bag as well.  It came with a program, a lanyard, a t-shirt, and some other nifty items.  But the greatest part was the aforementioned floor seats; once we wandered down to the floor, we discovered we were on the eighth row. 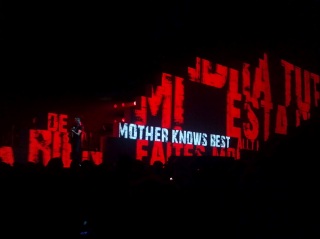 Mom and I were both really excited and the hour wait before the show started breezed by.  We talked about music; she felt that rock and roll music is her generation’s greatest contribution.  She talked of the first time she heard Led Zeppelin’s “Whole Lotta Love” on the radio and how it completely changed what music could be.  She spoke fondly of time spent listening to records and how music is still one of her biggest loves.  As we talked, I noted that the arena music was exclusively Bob Dylan.  We talked about his major part in the industry and Mom specifically points to him as the artist that opened her eyes that singers were more than that; some of them wrote for other artists and had talents beyond their top hits.  Not long before the show started, a few non-Dylan songs played.  One of them was Imagine by John Lennon, to which the filling auditorium partially sang along.  Then a song played that I hadn’t heard in over a decade:  A Change is Gonna Come by Sam Cooke.

The beginning orchestral strings swelled, and my heart followed.  Although I didn’t know the words, my heart remembered the sentiment.  Suddenly, the song personified my place in life at that very moment.  The hope from despair spoke to me about my father’s death.  It spoke to me about my repairing relationship with my brother.  It spoke to me about my girlfriend, Cindy, who has been a tremendous blessing and has quickly become the center of my world.  The song settled into my soul and said that I’d slogged through the mud in the last year and a half and that a change had, indeed, come.  I got a little emotional and played it off as best I could, not being able to form words. 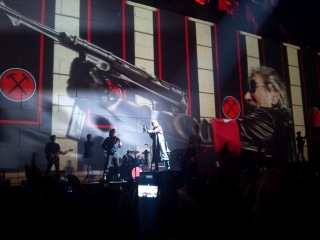 Shortly thereafter, the lights went down and the show started.  What followed was several hours of bombastic spectacle that I’d only read about.  Roger had a stage presence unlike anyone else and the scope of The Wall became evident quickly.  A song written about a boy whose father had died in WWII and coping with separation from loved ones/society worked in any time; pictures of veterans and civilians that had died as victims of warfare.  Giant inflatable creatures represented authority figures and a lack of trust in government showed up in lyrics and projected Wall graffiti alike.  It was nearly overwhelming; my earlier emotion was recalled throughout the presentation of this larger-than-life rock opera.

After the show, Mom surprised me.  She spoke up and said that she worried that her leaving Dad back in 2004 had disappointed her sons.  I told her I would’ve been disappointed if she’d stayed in a relationship that wasn’t working and that I loved her for the strength it took to stand up for herself.  I pointed out that I credit Dad with a lot of things; he taught me how to be a man, how to work hard and provide for those I care about.  But my mother taught me how to treat people, and how to respect those that I care about.  I make a living because of my Dad, but I make friends because of her.

We had a wonderful time.  Mother’s Day is this coming Sunday; be sure your mother knows how much she means to you.