Sunday started with one of the worst hangovers I’ve ever had.  I awoke with the sun and thought my head was collapsing from within.  Thankfully, things began to clear up as Kurt returned from the airport and the three of us set out for a trio of destinations.

Our first stop was the Red Rocks Park and Amphitheater.  I’d heard about the place before but didn’t really know what it looked like; when we arrived, I was awed.  Think of the jagged rocks in the old Star Trek episodes and place an amazing concert venue among them.  In the distance, the city of Denver exists as a faded matte painting.  Kurt told me of a Rush concert he attended at the venue back in the early 2000s that was punctuated by a vibrant thunderstorm over the Denver Metro.  I can only imagine the beauty.  As we walked around the amphitheater, I noticed over a dozen people running and stair climbing; evidently this concert hall doubled as a scenic exercise destination. 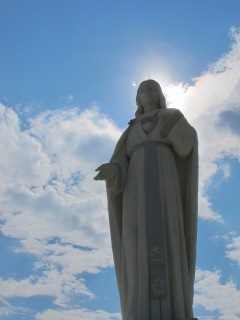 In fact, throughout my time in Colorado I’ve noticed a lot of people biking, running, and engaging in other forms of exercise.  Kurt and Sophie mentioned that Colorado has the lowest obesity rate in the country at about 20%.  I also noticed a lot of scooters on the roads.  I think most folks see Colorado as a pretty green state; not only does that count towards the environmentally-friendly nature of the majority of the populace but the dispensaries located on just about every street corner.  Back in 2005, Denver passed the Alcohol-Marijuana Equalization Initiative, which legalized possession in a variety of situations.  There are a lot of mellow people up here.

After Red Rocks, we drove to Golden, CO to visit the Mother Cabrini shrine.  Unbeknownst to me, the  shrine was atop 374 steps.  Coupled with the high altitude, I had to take a break midway through the climb and reached the top just as I felt I was going to collapse.  It was a beautiful view and, since it was Sunday, there were a lot of pilgrims there visiting and worshiping.  When we got back to the car, we headed to St. Mary’s Glacier.

Located in the Arapaho National Forest, the remnants of the ice field is located 10,300 feet above sea level…the last 3/4 mile a hike up a rocky trail.  It would’ve been rough on my by itself, but after the stair climb at the shrine I had to take several breaks.  As we crested the plateau that held the remnants of the retreating glacier, I felt like I was transported to another world.  The small lake was clear and crisp.  The air was clean and cool.  I marveled at the sight and closed my eyes.  I could hear running water from the melting ice across the lake and the sound of a nearby dog simultaneously splashing and drinking in the water.  I walked over to the water and dipped my hands in.  It felt like holy water.  It was one of the most serene spots I’ve ever visited.

We celebrated our long and physically exerting day by stopping by the Tommyknockers brewery in Idaho Springs.  We had some fantastic local brews and headed back to Denver, capping the day with homemade pizza, which incidentally was the best pizza I’ve ever eaten, and talking boxing with Kurt into the wee hours.  I love sharing in the passion of others.  I feel tremendously blessed to be experiencing this wonderful state with some amazing people.