Skip to content
rhysfunk Uncategorized December 16, 2012January 13, 2014 3 Minutes
Steven Chbosky wrote, “I am both happy and sad at the same time, and I’m still trying to figure out how that could be.”  There are words in the English language we use to define such an emotional place.  Ambivalence.  Bittersweet.  They hardly do justice to the actual emotion; I think those moments are some of the most important we can experience on our journey through this world. 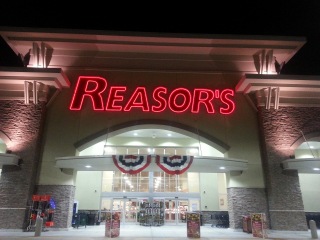 I found myself in Bixby this evening, after having a nice visit with my friends Billy and Joy.  Next to their apartment complex stood a brand-new Reasor’s grocery store.  I left the Carr’s apartment tired and ready to go home, but the allure of a sparkling, pristine supermarket was too much for me.  I pulled in and looked up at the fresh neon.  The glow against the night sky, positioned above the flourescent light pouring from the glass storefront, called to me as a porch light calls to a moth.  I feel the same way about a new grocery store that a lot of folks feel about new cars.  As it was, it was late and I pretty much had the store to myself.
I walked inside and was hit with something unexpected; the smell.  Growing up, I visited grand openings of grocery stores with my father many times.  There’s a smell that can’t be narrowed to any one thing…it’s a mixture of the new product, the new fixtures, the paint, everything.  It triggered a flood of non-specific memory from childhood.  I smiled as I wandered through the produce section and took in the layout.  I will never know even half of what my Dad did about the why’s behind grocery store layouts.  I know there is purpose behind everything, and some of it is rather logical.  But just because I don’t fully understand something doesn’t mean it I don’t appreciate it.
Walking up and down the aisles of the store, I could hear my father’s voice speaking softly into a micro-cassette recorder.  He used to walk the competition and speak products and prices; afterwards, he would go home, replay his tape, and compare it to the giant green-and-white spreadsheet that represented his prices.  The shelves were full of perfectly faced product.  The freezer cases were untarnished and clear.  The lights were bright and even.  It was a gorgeous store, and I smiled genuinely as I explored.  That elation mixed with the melancholy tendrils of loss, my memories of Dad all those years ago muddying with the more recent memory of an etched stone on a hill in Pawhuska.
There’s something beautiful that happens when such strong emotions come into contact.  It breathes life into those old memories, bringing appreciation for those old times to a point where, for a moment, reality takes a back seat.  I wandered those aisles not in grief, but in service.  I could’ve been checking the place out as a favor for him.  Maybe it was his store, and he was in the back somewhere helping the stock boys.  In any case, Dad felt alive within me.  The same thing happens when I watch an old film he loved or I experience something new I just know he would have.
Although it’s not that strong on regular trips, grocery shopping always brings him back for me.  I think of the things he’d say, the teachings I’ve almost forgotten about the business, and the times I spent in stores with him.  I think of the way he treated people, with respect, and how much he really loved it.  I wouldn’t be surprised if I found myself in one again someday, perhaps with a head of silver hair, smiling and helping strangers with a task many people consider rote and a chore.  My smile would be genuine, because I would not only be myself, but I would be my father and his father before him.  There’s something so deeply comforting about that.