"As I look out over this magnificent vista…" 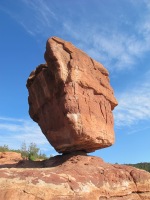 Some people take vacation and decide they’re going to sleep in every day, relax, and not do much of anything.  That’s fine and good…when I take a day off here and there, that’s definitely what I TRY to do (my body doesn’t let me sleep in that far these days, and if it does I usually awake with a headache) but when I take time off in a long stretch I gotta do something with it.  So when I woke up bright and early just after 6:00 AM on Sunday to greet the sunrise, I felt fantastic.  We got rounded up without much fanfare and left the Stagecoach Motel in Colorado Springs to our first stop:  Garden of the Gods.

I visited this park last year, and although I had a fantastic time and really enjoyed it that entire vacation to the Denver area was soured by the strange events that followed my trip; the couple that had opened their home to me and, it seemed, had really enjoyed my company for the week I was visiting sent me an email a few weeks later that said some really hurtful things. They severed all ties to me and that was that.  I still don’t understand what happened…but that’s a year ago now, and I was here in Colorado to make some new, untainted memories.  Not only that, but being in this magnificent place at sunrise provided us with cool temperatures and low population.  Like last time, I was struck at how quickly I ran out of breath; just because I wasn’t on a mountain didn’t mean the elevation wasn’t a factor.  I could exercise more, too, I suppose.

I lead DeeDee to a perch I’d discovered on my last trip and we sat for a few minutes, looking out at the rock formations and marveling at the ingenuity of nature.  Once we felt like moving again, we wandered around the park for a bit longer, seeing the Kissing Camel rock formation and the Balanced Rock just down the road, and then left town.  The original plan was to drive north to Denver and cross over to our next stop, Grand Junction.  That plan changed when I was telling some other friends about my upcoming trip and they insisted I take the south route, taking Highway 50 through the San Isabel National Forest.  That was absolutely the right thing to do, because boy howdy was it a picturesque drive.
Not only did the road we took go through many small towns like Salida and Gunnison, but we stopped at many natural wonders to soak them in.  Even though the Royal Gorge National Park was completely closed due to the wildfires last month, we were able to find a small picnic area still open so we could see the gorge and the bridge.  It was breathtaking.  Even though I have a really rough fear of heights, I scrambled out to an area closer to the edge than I can normally tolerate to take some pictures and view the river below.  Suddenly, I became aware of my surroundings (I blame other tourists that showed up and started crowding me) and literally ran back to the car.  It was a real shame about the rest of the park; were surrounded by blackened trees and a barren landscape where once wildlife flourished.  Although the ranger I talked to said they’d re-open eventually, 48 of 52 buildings burnt down in addition to the forest and it would be a long time.

The unplanned nature of our stops throughout the rest of the day added excitement and unpredictability.  We wandered through the downtown arts district of Salida, rode a sky ride up to the top of Monarch Pass (not only did that give us the opportunity to see the Continental Divide from 12,000 ft up, but a small thunderstorm rolled through and we got stuck on top of the mountain for about half an hour!), and watched rafters navigate the rapids of the Arkansas River.  At one point, I was driving and noticed a road sign that had a camera on it with an arrow pointing to the right.  “Take a picture?  Of what?  There’s not…OH!”  As soon as I started talking, the landscape opened up on my right to reveal the Dillon Pinnacles, an amazing rock formation across the river.  I laughed at myself; how crazy is it that these amazing natural sights seem to pop up out of nowhere?
After a long day of beautiful vistas and winding roads, we arrived in Grand Junction.  We ate at a local Irish Pub recommended to us by Alex, spent a few minutes in the hot tub (good for my aching shoulders, bad for my ears courtesy of the many screaming children), and slept soundly, knowing the next leg of our journey would take us into Salt Lake City itself.

Rhys Martin was born in Tulsa, Oklahoma in 1981. In 2009, he sold everything he owned and left the country, living out of a backpack for ten months. He discovered a passion for photography while traveling throughout Southeast Asia and Europe. After returning home, he looked at his home town and Oklahoma heritage with fresh eyes. When he began to explore his home state, Rhys turned his attention to historic Route 66. As he became familiar with the iconic highway, he began to truly appreciate Oklahoma’s place along the Mother Road. He has traveled all 2,400 miles of Route 66, from Chicago to Los Angeles. He has also driven many miles on rural Oklahoma highways to explore the fading Main Streets of our small towns. Rhys has a desire to find and share the unique qualities of the Sooner State with the rest of the world. Cloudless Lens Photography has been featured in several publications including This Land, Route 66 Magazine, Nimrod Journal, Inbound Asia Magazine, The Oklahoman, and the Tulsa World. In 2018 he published his first book, Lost Restaurants of Tulsa. Rhys loves to connect with people and share his experiences; ask him about enjoyable day trips from Tulsa, locations along Route 66, and good diners or burger joints along the way.
View all posts by rhysfunk →
This entry was posted in Uncategorized and tagged Colorado, Colorado Springs, Garden of the Gods, Monarch Pass, road trip, Royal Gorge, travel. Bookmark the permalink.