Today was a long day.  Which is odd, really, when you think about how busy every day has been for the last week.  But the 8 and 1/2 hour drive from Flagstaff to Amarillo isn’t populated by much.  Lots of wide open spaces full of scrub brush and dust.  We only had one stop planned, and that was in Albuquerque, New Mexico.

Some time back, I read an article that named 50 of the most beautiful old movie theaters in the country.  I made myself a map of them so that I could reference it any time I did some traveling.  That’s how I discovered the Fox Theatre in Hutchinson, KS that I visited last Saturday.  The same is true of the KiMo Theater in Albuquerque.  After driving five-and-a-half hours, we arrived in town to find the theater.  It was downtown, which was just a little ways off I-40, but the lovely GPS took us to a road that was completely closed due to construction.  We weren’t the only people caught off-guard; the traffic snarl took about half an hour to get through before emerging on Central Ave, which is also Old Route 66.

This part of downtown, much like other places I’ve visited, really plays up the Mother Road heritage.  Lots of signage, touristy shops, and diners.  The KiMo Theater is a gorgeous building from 1927 that blends the local traditional adobe style (which is EVERYWHERE) with art deco and other architectural influences of the time.  It was a beautiful day; the blues, yellows, and reds of the building shone as bright as they must have when the building was new.  It wasn’t open (though it’s in the middle of a Stanley Kubrick retrospective) but the awning and interior appeared to mirror the amazing style of the exterior.  Lunch was had across the street at Lindy’s (an old Route 66 diner) and we left town with another 4+ hours on the road ahead of us.

Originally, the last half of today was just going to be a drive straight to Amarillo.  However, after my last post, my friend Randy messaged me and encouraged me to visit the town of Tucumcari, an old Route 66 spot.  I saw a few of his pictures and, since it wasn’t far off the main highway, figured I’d give it a try.  On the way, I noticed a LOT of small towns with signs encouraging drivers to see ‘Historic Route 66’ and drive through their main street instead of zipping by at 75 miles per hour.  Every sign I passed filled me with more despair that I was missing these small gems of Americana; finally, I could bypass no more.  I pulled off I-40 at Moriarty to have a look. 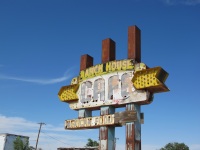 Moriarty is the name of Sherlock Holmes’ nemesis, so DeeDee and I took pleasure in photographing the town sign.  Aside from that, it was pretty quiet.  Not a lot of classic stuff left aside from occasional ‘Historic Route 66’ highway signs.  When we picked back up on I-40, I began to wonder if these detours would be worth the time.  Tucumcari was coming up soon, but before that a small town called Santa Rosa beckoned to me with giant billboards promising fun and adventure.  Although the adventure in Santa Rosa was as faded as the billboard was, there was evidence everywhere of the former glory days.  Old restaurants, motels, and obviously repurposed buildings lined Route 66.  By the time I’d stopped for a few photos, my excitement matched the promise of that ancient roadside advertisement.

Tucumcari was next.  The photos I’d seen the day before were of restored hotels and shining classic automobiles in the center of town.  I took the first exit I could and entered the edge of town on Old 66 because what I wanted were the dregs:  the unrestored, abandoned, and closed ghosts of road trips past.  The town exceeded my expectations.  Dismantled drive-ins, overgrown hotels, and boarded up filling stations were everywhere.  Even in the middle of Saturday afternoon, the town moved at a snail’s pace.  I want to go back some day when I can REALLY spend time in these small towns and explore each street, not just the main route.  Before long, it will all be gone.

As we approached Amarillo, we stopped at our last detour of the day:  Cadillac Ranch.  An art installation dating back to 1974, it consists of multiple various-model classic Cadillac cars buried past the hoods and sticking out of the ground at an angle.  People are encouraged to come by and add their own art to the living canvas by spray-painting on the junked vehicles.  It’s really something, especially considering the cars are on an actual in-use ranch.  Cows grazed nearby as I sprayed my initials on a tire rim and took pictures of the rest of the cars.  It’s definitely a surreal sight.

Tomorrow is the last hurrah; driving home to Tulsa with only a few minor detours planned.  I’m very eager to get home and into my own bed, but this trip has been truly wonderful and I don’t want it to end.