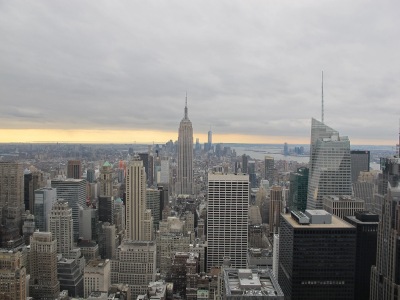 Yesterday started early.  We woke before dawn and bundled up.  Sam’s Grams gave us a lift to the train station and we caught the 7:27 train to Grand Central.  Being on a train again brought back a lot of memories of London, Kuala Lumpur, and Osaka.  I watched out the windows with great anticipation as we passed through several small towns like Bedford Hills and Chappaqua.  As we got closer to the city, the buildings got denser and taller.  We passed through a tunnel and suddenly we’re riding through Harlem.  Brick apartment buildings were scattered to the horizon; the city seemed to stretch on forever.  It wasn’t long before we entered another tunnel and arrived at Grand Central Station.
Surreal was the word of the day, for sure.  Here I was, standing in arguably the most famous train station in the world, looking up at the windows and tile work with my own eyes.  It wasn’t as busy as I expected, thanks to us arriving at a non-peak time, and I was able to wander the levels a bit with my camera.  Sam showed me the aural phenomenon that is Whispering Corners (a landing in the station where two people can face away from each other and talk into the tile and hear each other from quite a few feet away.  It reminded me a little of Center of the Universe in Tulsa.  I wonder if this was intentional or just a coincidence, much like the Center? 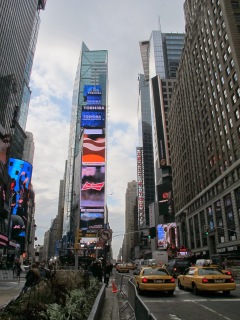 Leaving the station, I was greeted with my first real look at the city…and it was busy.  People rushing everywhere on their important errands, trash piled up at the curbside, and Starbucks shops as far as the eye could see.  We took my friend Richard’s recommendation to see the Chrysler Building lobby first (an art deco treasure) before walking down to the New York Public Library.  It wasn’t open yet, but I got to see the iconic lions out front with their decorative Christmas wreaths.  Around the other side sat Bryant Park, with a few pop-up shops and an ice rink.  Sam tells me the fountain there was featured in the opening for Friends…but seeing as how I never watched that show I just nodded and smiled.  We walked a bit further and I suddenly found myself surrounded by the bright lights of Times Square.
Surreal, once more.  It was the day before New Year’s Eve; police barricades were already set up in many areas and preparations were well underway for the celebration.  I stood in the center of the square, nearly by myself, looking up at advertisements and displays that cost more than I’ll probably make in my lifetime.  Taxi cabs crawled around me and people continued their rushing about.  I took my small TARDIS out to get a shot of the square when I noticed a guy taking a picture with a worn little sock monkey.  He saw my TARDIS and we talked for a few moments; he was in the city on business and was taking a picture of the monkey for family back home in Oregon.  He was a Doctor Who fan and insisted on getting a few shots my traveling companion as well.  We parted ways as quickly as we met; Sam and I wandered from the square and headed to Rockefeller Plaza. 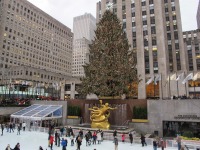 The walk from Times Square to Rockefeller was filled with more sights that littered my memory, including Radio City Music Hall & NBC Studios.  We rounded the corner to the plaza and my vision was filled with one of the largest trees I’d ever seen.  People were everywhere, taking photos and reveling in the giant Christmas tree.  Ice skaters glided around below us as we circled the plaza, looking into the Lego Store and the nearby Nintendo World store.  My heart was full of excitement as we went into 30 Rockefeller Plaza and rode the elevator up to the observation deck.  It was there that I saw the most amazing sight of the day:  Manhattan from 70 floors up.  We walked around the rooftop and could see to the horizon in all directions.  The Empire State Building and World Trade Center to the south, Central Park to the north, and all points in between.  It was stunning!
Once we descended back to the surface, we took the subway south to the Flatiron district.  The Flatiron building was my absolute must-see in the city; since I loved the Triangle Building in Pawhuska so much and had seen it my entire life, I was very interested in seeing the most famous triangular building in the world.  It didn’t disappoint.  It looks impossibly thin from many angles & the architecture had many stylistic nuances that speak to the time it was built.  Like the rest of New York, it was surrounded by dozens of other buildings that, had they been built elsewhere, would get a lot more attention.  In New York, though, architecture suffers from an embarrassment of riches.  We had lunch (at a great little burger place called Schnipper’s!) and walked over to The Highline, an old elevated train track that was converted to a park a few years ago.  This was probably the least-touristy place of the day, and even though it was winter time there were sections of green grass among the dormant bushes and trees.  It was here that I realized the shoes I had brought didn’t have enough arch support for the day’s walking and I developed a slight limp. 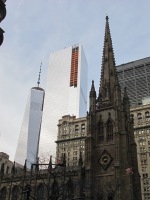 We walked back to the subway and went south to Hook and Ladder 8, the fire house in TriBeCa that was used in ‘Ghostbusters’.  It was pretty quiet; aside from a painted logo on the sidewalk with a ghost you might not even know its’ significance.  It is still in service, but I got a few shots of the building.  My geek heart was happy!  We continued walking south, seeing the new Trade Center up close, Trinity Church (with grave markers form the 1700s!) and eventually making it to Battery Park, which is as close as I got to the Statue of Liberty.  By now, the sun was setting and we needed to head back uptown to have dinner and see the play we had tickets for:  Waiting for Godot with Sir Ian McKellen and Sir Patrick Stewart.  Suffice to say, it exceeded my expectations.  It definitely shows that those two are close friends in real life.  Sam, who isn’t a fan of Beckett’s work normally, was pleasantly surprised at how the play came to life.
We boarded the train back to Brewster at 10:22.  We spent thirteen hours touring the city.  I saw many of the sights I wanted to see, and a few that surprised me.  As I mentioned earlier, the entire day was filled with the surreality that I was in this famous city after dreaming about it for so long.  I felt blessed to experience it with Sam, and we both saw some parts of New York for the first time.  It’s that kind of place.  I could spend the rest of my life in NYC and never have the same day twice.