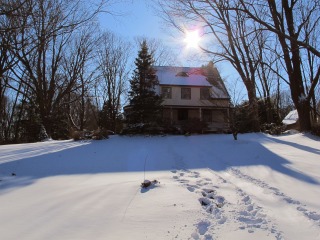 As I mentioned in my last post, I have been enjoying a few days of rest up here in Brewster.  However, rest does not mean immobility.  Before the snow moved in yesterday evening, I was able to get out and about a little bit around the village and have a look at a few places.

The house sits on a hillside in Putnam County, not far from the Tilly Foster Mine and surrounded by multiple water reservoirs that supply some of the water to New York City.  A dusting of snow fell on Thursday morning, and I was able to wander the acreage and get some photos.  I love the tall, narrow trees and the partially collapsed rock walls that litter the landscape here.  I also toured the old workshop that belonged to Sam’s grandfather that passed nearly a year ago.  The cluttered barn was full of old parts and pieces; it was clear where Sam got much of her love for tinkering.  It felt like a holy place.  Once I’d sufficiently explored that, Sam’s mom offered to take us around a few places I might find interesting. 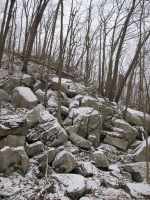 Our first stop was a tumble of rocks along the road about half a mile from Gram’s house.  It is Cindy’s favorite place in the entire area, though she doesn’t know why.  Looking around myself, the rocks at this particular spot were larger than any others.  Most likely, they were participants in a rock slide some years ago and this was not their original home.  As such, they stood out and the shadows danced around them uniquely.  Once we left and headed towards the village proper, I noticed the woods had a lot of fallen trees.  Cindy told me the area is a designated watershed area and removing the trees is actually illegal.  As such, the patterns of snowfall and shadow were beautiful in a special way.

The main sight I wanted to spend some time looking at in Brewster was an old railroad bridge that spanned the river.  Those that know me know of my love for old steel bridges.  Thanks to the kindness of the folks at the Honda dealership that exists below the old bridge, I was able to wander freely and get some shots I’m quite happy with.  I also looked at the old Borden Milk factory, the closed elementary school Sam went to, and drove through the quaint downtown district (complete with traditional diner and closed movie theater.)

Today, we awoke to six inches of snow on the ground and temperatures in the single digits.  Sam was giddy with excitement, because this meant we could go sledding…something I’d never done before.  I trudged through the snow after her, can of Pam and round sled in hand.  Sam was kind enough to blaze a path down the hillside, after which we took turns sliding down the increasingly fast slope.  The countryside was silent aside from our happy noisemaking.  Even though I was cold and exhausted after a short while, I loved it.  It felt like a rite of passage. 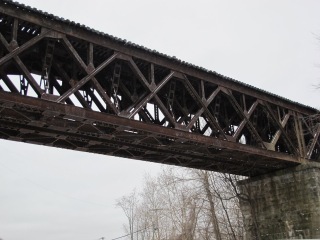 I just finished helping bake a cake with Sam and Avery, the four year old that has complete control of the household.  Gram is sitting at the kitchen table, making a quilt.  Even though it isn’t quite four in the afternoon yet, the shadows already surround the house.  It’s been a good few days; even though my foot still aches from whatever the heck I did on Monday, we’re talking about going into the city one final time tomorrow.  My trip so far has been glorious and breathtaking…I could go home right now and be totally satisfied with my trip.  Regardless of what happens tomorrow, I’ve had such a wonderful time.