It’s no secret that I love road tripping around Oklahoma and visiting small towns.  Some are lively, others are dying.  A few are completely gone, but have left a couple of small pieces that tell the world that they existed.  In all of these places, I take my camera and look for sights that interest me.  I enjoy urban decay, slices of small town Americana, diners…and especially old steel bridges.  I go nuts when I see one, especially if it’s been bypassed and sitting all by itself.  A coworker told me about one a few weeks ago that was down near Haskell and I took advantage of today’s delightful weather to go see it.  Not only that, but my girlfriend Sam wanted to join me.  AND we got to have breakfast at Savoy.  All of these things add up to a very happy Rhys.

Driving around Oklahoma with her is a treat; old places are new again as I talk about my connection to them or what makes them unique.  We talk over the news of the day on the long stretches of farmland and we laugh often.  As we drove to Haskell, Oklahoma we passed through farmland that actually quieted the car with its beauty.  The fields were breathtaking; irrigation systems were out in full force, preparing for the spring.  It felt like we’d driven into another state entirely.  Just before hitting Haskell town limits, I saw the bridge.  It spanned the Arkansas River and had been bypassed by a new bridge some time ago.  I pulled off onto a side road that once funneled all traffic across the bridge.  Now, this asphalt only lead to a small house and a dead-end.  I stopped at the end of the road and prepared to get out with my camera, but Sam was quick to point out the car was about to be surrounded by dogs.  Even though I’d never gone onto any private property, it was clear this pack considered the old dead end to belong to them.  They didn’t growl or give off any aggressive vibes, but better safe than sorry.  I parked up next to the main highway and walked down to the river side.

The bridge was beautiful.  It was the longest steel bridge I’d been able to explore.  It’s ten spans long and has to be nearly 2000 feet long.  It was obviously a powerhouse in its day, but is now slowly being eaten away by nature.  On the south side of the bridge, a nice beach lined the river.  It was a small piece of paradise in Muskogee County.  I returned to the car, giddy with excitement.  Sam had stayed behind, and I told her about my short trek as I drove into Haskell proper.  I quickly became concerned, however, as I began to smell the troubling sweet odor of burning coolant.  Even though everything seemed to be fine, I didn’t want to risk any car trouble.  We pulled into a Dollar General and went in.

Sam and I approached the checkout counter with a bottle of coolant, a dish rag, and two bottles of water.  The cashier, Jeremy, looked at us and said matter-of-factly, “You two don’t live around here, do ya?”  I was stunned; I’m not sure what gave us away.  Perhaps this particular store served the same basic customers daily.  No matter, I thought.  He said it in a friendly way.  I confirmed that we were just passing through.  He smiled and chat with us, asking what was wrong with the car and gave us his advice on what could be causing the smell.  “Better safe than sorry,” Jeremy said.  “If you got stuck on the side of the road, she’d whoop up on ya somethin’ fierce.”  We laughed and thanked him as he handed me the receipt.  “Enjoy this lovely weather, now” he said as we left the store.  It’s refreshing when I am greeted with the small town charm I remember from growing up.

We left Haskell with our provisions (which I never needed – made it all the way back home without any sickly-sweet smell or any kind of engine issue) and headed up Highway 64 towards home.  Not far from Haskell, a shrouded steel structure caught my eye.  Another bridge!  I pulled over and excitedly scrambled down the embankment to the surprise find, which turned out to be an old Union Pacific railroad bridge.  Interestingly, it was skewed on one side which gave it a crooked look.  The wood didn’t look sturdy, so I didn’t cross, but I did climb down to the creek below to take some wonderful photos.

Our final stop was in Bixby.  I realized that most of our day consisted of me running around with my camera while Sam waited; she said she was fine, but it still weighed on me.  The sun was warm, so we stopped at a park to walk around a bit.  The old Highway 64 bridge spanning the Arkansas River is now a walking path, so we stayed with the days’ theme and enjoyed a leisurely walk in the false spring sunshine.  It was glorious.  I’m thankful for the company, the destination, and the means to spend my Saturday seeing new corners of Oklahoma. 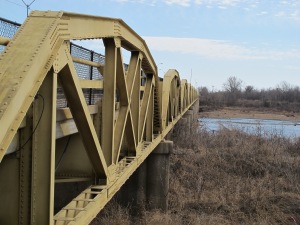