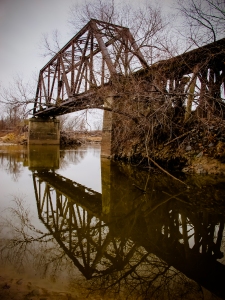 When I first returned home from traveling, my focus was on sharing Tulsa with the rest of the world.  As I became familiar with my home town, I noticed that I was sharing it with people that lived here, too.  I was amazed at how much my photography was appreciated by those that had lived here their whole loves.  As I continued to journey outside of T-Town and understand what appealed to me in the rural communities of northeast Oklahoma, I found that I had the greatest feeling of fulfillment when I was able to share something I’d discovered…only to find out that someone I knew already had history in that particular corner of the state.  It was like I’d stumbled across some sort of secret.

Last Monday, I drove south, past Henryetta, seeking a bridge.  I’d seen a few old photos of it online and wanted to capture it myself.  It was an abandoned railroad bridge crossing the North Canadian River, and I was fascinated by its incomplete nature.  One of the trusses was completely missing; the bridge no longer crossed the water completely, though the intact concrete abutments helped you picture what once was.  The opposite side of the bridge had been burned away, leaving this wood and steel skeleton to sit in the sand.  I found the bridge and gleefully hopped around the river bank to document it.  It was overcast, but the clouds added to the starkness of the landscape.  When I got back into the car, I was eager to continue driving to see what else I could find in unfamiliar counties. 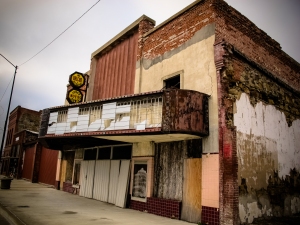 I stopped in the town of Wetumka, some 15 miles from the old railroad bridge.  In addition to wandering their simple grocery store (which reminded me a lot of my father) I walked down part of their Main Street.  By now, though, it wasn’t much of a business center.  Most of the buildings were shuttered, dilapidated, or simply husks of concrete.  Several of the had suffered fires or a collapsed roof.  In fact, aside from the gas station and aforementioned grocer, there wasn’t much life to it.  One building that stood out to me in particular was the old movie house.  It looked like they’d tried to turn it into a restaurant/theater but that must’ve been a long time ago.  I took some photos of it and moved on.  After I shared one of these photos, I learned that an old friends of mine spent his summers in Wetumka.  He had memories of the theater and the other buildings that were now brick ghosts.    Although he hadn’t been there in decades, it still helped me understand a little more about him and what this town once was.

After some more driving, I found myself walking across a one-lane bridge in Pottawatomie County.  It was the main thoroughfare between the towns of Wanette and Byars, though it was originally constructed as a railroad bridge.  It was nearly 800 feet long and beautiful.  The river here was low, so I was able to get all around it to appreciate the grand detail that had been straddling the Canadian River for 112 years.  As I was wandering, a truck-and-trailer drove by, hauling horses.  I did the traditional wave, which I received back.  The driver looked like he lived nearby, and undoubtedly crossed this bridge regularly.  Did he appreciate the bridge like I did?  I’m sure he did, for other reasons; without this bridge, the people in those two towns had to drive an additional 25 miles to get from point A to point B.  A city boy from Tulsa had driven over one hundred miles to experience this diamond in the rough, proudly supporting two more dying Oklahoma towns.  Perhaps my enthusiasm made him stop and look at that bridge a second time and wonder what secret had brought me all the way out there.

There are many places I’ve driven through that have had no stories for me.  I’ve continued on without stopping, perhaps putting my hand on my camera as I thought.  Maybe I will return to the places I’ve bypassed these last few years, this time carrying knowledge from a friend or relative that bring them to life.  Or, perhaps, as I grow in years, I’ll be able to see them for myself. 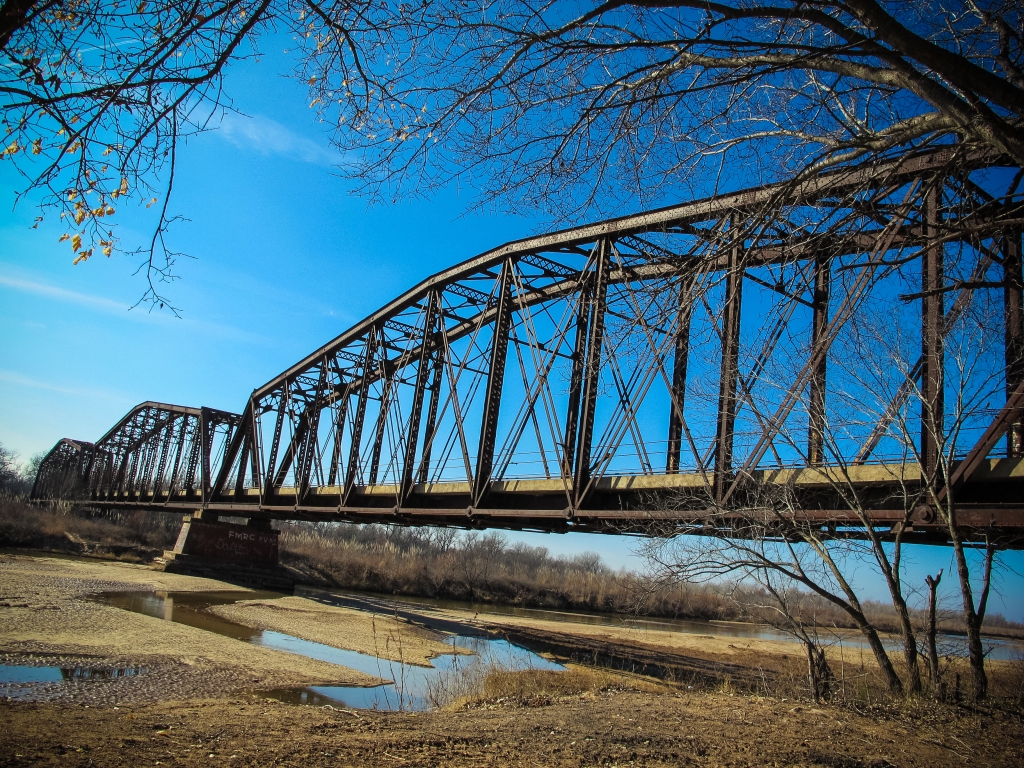