Most of my road trips lately have been solo journeys.  My days off don’t align perfectly with Samantha’s currently, so I have been without a co-pilot during my jaunts down Route 66 or my exploration of forgotten bridges in the rural Oklahoma countryside.  Sunday, however, was a different story.  We both had the day off and spent some time on the road, which made me a very happy camper.

The main reason we were driving out of Tulsa was the fact that my brother had recently moved and needed help putting up a fence.  He’d been asking me for weeks to come out to Tahlequah to help him, but a mix of delays and my busy schedule kept pushing things back.  Thankfully, that also finally worked out.  Samantha and I hopped in the car a little before 9:00 AM and drove east.  The only thing we’d specifically planned on was meeting up with Tyler; the threat of afternoon rain and the general unpredictability of my brother held us back from making any other concrete plans, though we both agreed that our cut-off time was 3:00 PM.

Just before we arrived at Tyler’s place, I pulled into the driveway of an unfamiliar house.  Samantha looked at me sideways, silently seeking explanation for my unexpected stop.  “Hey, so, there’s this old grave stone on this property I want to capture.  I’m going to go up to the house and ask permission from the owners,” I said nonchalantly.  Sam nodded slowly, surely formulating a plan of action for when I got chased off this rural property by a gun-toting farmer.  She stayed in the car.  As it turned out, a younger man answered the door and told me it would be no problem; what I was seeking was out back next to the barn.  I beckoned for Sam to join me, which she did, still not knowing why exactly we had stopped.  As we walked around the house, Sam finally asked.  “What grave stone are we here to see?”  I pointed to the marker ahead, which was becoming legible.  Here, in a nondescript field in rural northeast Oklahoma, was the final resting place of TV’s famous talking horse, Mr. Ed.  I took a few photos and we stood in silence; Sam was awestruck.  Although there is some debate over WHICH Mr. Ed is buried here (the one from the television show itself or his publicity/photo double) it’s still pretty amazing to think that this can exist with so little local awareness.  It was a very peaceful spot, and one that felt very fitting. 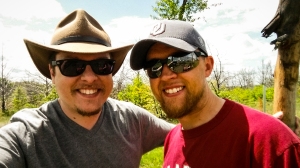 Satisfied, we returned to the car and drove to the trailer house Tyler now called home.  I’d never pictured my brother living in the country, but it seemed to fit him.  I was very pleased to see him so happy.  By the time mid-afternoon rolled around, 2/3 of the chain link fence was up and there was considerable debate on completing it, as the soft soil was playing havoc with the fresh fence posts.  It felt nice to help out and feel somewhat useful among a group of 5 or so that were very familiar with this type of work; I’m a pure city boy and I just did what I was told.  It was also nice to spend some time with my brother. Over the last few months, I haven’t spent much time with him as he’s been working a lot and now lives over an hour away.  Not that far when you consider all of Sam’s family is in New York, but still enough that it has had an impact to our quality time together.  Almost right on schedule, everyone took a break and it was time for me and Sam to mosey. 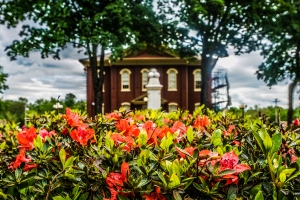 After we said our goodbyes, we took a quick detour through Tahlequah proper before hitting the road home.  I had my new camera, after all, and couldn’t resist a few minutes in their quaint downtown.  They were getting ready for the annual Red Fern Festival, as the book ‘Where the Red Fern Grows’ is set near the town.  As I took photos of the Cherokee Capital Building (which actually served as the center of the Cherokee Nation from 1869 until Oklahoma statehood in 1907) a local walked up to me and struck up a conversation.  He asked if I had any Indian heritage (I do; Choctaw mostly, but Cherokee and Havasupi also) and talked a bit about some of the sculptures around the town square.  When I said I’d never been to the Red Fern Festival, he was adamant that I come back to experience it first hand.  He thanked me for chatting and wandered off as Samantha and I continued our walk down main street. Storm clouds built overhead as we explored; the darkness that was approaching from the west meant it was time to high-tail it back to Tulsa.

The clouds continued to darken and finally opened up on us about 20 miles outside of Tahlequah.  It was like someone turned on a celestial faucet; suddenly it was an absolute downpour.  When hail joined the torrential rain, I pulled over to wait it out.  In classic Oklahoma thunderstorm fashion, it wrapped up within fifteen minutes or so; quick enough that I could actually stop in the nearby town of Fort Gibson for a few minutes and take some pictures of an old bridge that’d been on my map for months.  As a bonus, the bridge I was hunting was RIGHT next to a similar railroad truss bridge.  I love a good two-for-one!  The pavement steamed from the cold rain as I watched the Grand River flow by underneath me for a few minutes, reveling in the peace that follows a good storm.

It had been a wonderful day; family time, road time, new and old sights, and my favorite person at my side for all of it.  I’m happier in my 30’s than I’ve ever been in my life. I have a creative outlet that I enjoy, a great group of friends both local and abroad, and the love of a person that builds me up and inspires me to keep reaching forward in spite of my tendency towards strong self criticism. Couldn’t ask for anything better.

3 thoughts on “Home of the Cherokee”

Reed-Niland Corner in Colo, #Iowa. It's the place where the Jefferson Highway and Lincoln Highway intersect. There's been a little gas station here since 1923, with lodging added soon after. It's quiet today but served many-a-traveler in the days before the interstate. #Travel #JeffersonHighway #LincolnHighway #neon #signage #everything_signage
I'm sure there's a bit of a history behind this sign at a repurposed service station in Luther, #Oklahoma. #smalltown #roadtrip #dont
This #MufflerMan in #NewJersey is one of the Halfwit variations, and he's in great shape for his age! We should all be so lucky. #travel #roadtrip #roadsideamerica
Nothin' but blue skies do I see 🎶 #Tulsa #Oklahoma #Route66 #OK66