Last week, a coworker approached me and mentioned that they were looking for some new artwork for the Call Center.  He mentioned a few things they were looking for and asked if I had anything that he might be able to present for consideration.  A few days later, I was looking at half-a-dozen poster size prints of my artwork as they were being prepped for framing.  It was very rewarding and I’m super proud about this accomplishment!

In those conversations, the same coworker asked me if I had any photos of the Public Service Company of Oklahoma power station on the Arkansas River.  I realized that I didn’t really have any good pictures of it, so Tuesday night I grabbed my camera bag and headed to the banks of the Arkansas River to get a couple shots and fix the hole in my collection.  If you aren’t from the Tulsa area, you probably don’t know about the massive changes coming to the Riverside part of town.  The area has been home to running and biking trails for some time, and is a beloved part of town (even though the Arkansas River rarely has enough water in it to distinguish itself as an actual river.)  Well, that is all being churned up in favor of The Gathering Place, a $200+ million project that I believe will completely transform the city.  It’s going to be a top-of-the-line city park and I’m REALLY excited about it … but until it’s finished, Riverside Drive is in various stages of disaster.

I didn’t realize how much had already been done until I arrived, when I discovered the old pedestrian bridge across the river was closed.  Not only that, but all parking nearby was gone and that section of the River Parks was mostly closed off.  I ended up parking in a neighborhood about a quarter mile away and walking along Riverside Drive.  All of the sidewalks were gone and many areas were cordoned off with fence.  It’s a shame that the area is mostly inaccessible, as the river is higher than I’ve seen it in a long time.  Heavy rains as of late have caused a lot of flooding in other parts of the state, and I think all of our rivers are swollen as a result.  When I arrived at the old pedestrian bridge, I precariously crossed the shattered concrete to get a few pictures of the river.  It was very quiet and peaceful, and the clouds were beginning to light up in a way that foretold of a brilliant sunset.  When I noticed this, I quickly scurried across the unmowed grass and weeds to a small boat ramp across the river from the PSO Station, my actual destination. 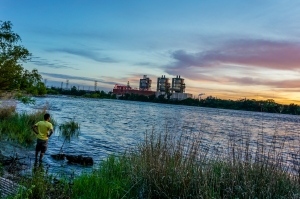 As I began walking down the ridged concrete of the ramp, I saw someone down at the river’s edge.  A young Hispanic man was at the base of the ramp, fishing!  He turned to look at me, gave me the traditional head nod, and then resumed his task.  From the looks of the gear around him, he had been there a while…and expected to be there a while longer.  As I looked for a good rock to sit on, I noticed the remains of a camp fire and the makings of a new one for the night.  He had several containers, a backpack, and a variety of fishing gear I couldn’t begin to identify.  My mind went back to the sign at the top of the ramp that said, “Water contact activities may increase risk of exposure to harmful organisms.”  Surely he wasn’t catching fish to eat?  I didn’t ask; I simply chose a rock on the edge of the river, sat, and cleared my mind.

The power station has a huge lit sign that faces the river; usually, it’s surrounded by the sandy riverbed but the heightened water levels provided a little bit of a reflection that made me smile.  As the sun set, the clouds lit up and I snapped away.  It was a beautiful sunset, and although I’m sure it was over in about 15 minutes I felt like I sat there for an hour.  You could hear the water lapping against the rocks and birds chirping in the distance.  As the reds and oranges in the sky gave way to purples and deep blues, I put my camera away and just took in my environment.  Sometimes, it’s difficult for me to stop and just BE somewhere; I’m looking for my next photo and that means I miss the small stuff now and again.  It’s good to just stop and allow yourself to settle inside.

Once I was satisfied, I waved goodbye to my wordless fishing friend and walked back to the car.  Miraculously, I got home tick-free; the only irritation was that I’d foolishly worn newer shoes and they were caked in mud.  All in all, though, it was very worthwhile.

The #Route66 episode of Roadfood must've aired recently because I've gotten a few texts. It was great to spend a bit of time with Misha Collins and Michael Stern in Arcadia last December on behalf of @oklahomaroute66. Here we are at John Hargrove's OK County 66 attraction. #Oklahoma #OK66
Many thanks to ODOT for taking me on a little tour of the one and only Pony #Bridge, what I consider Oklahoma's #Route66 roadbed crown jewel. It's due for a ton of work soon to make sure the experience is around for decades to come. #Oklahoma #ponytruss #bridges #OK66
Nothing like a bit of local-made ice cream to wrap up a lovely evening. Big Dipper in Sand Springs feels like an old school small town parlor. #SandSprings #icecream
1922 #Packard I had the pleasure of riding in today. The Heart of #Route66 Auto Museum in #Sapulpa is offering Saturday cruises all summer! #Oklahoma #TravelOK