I was startled awake Tuesday morning by a strange sound.  As I stirred from a deep sleep, my brain tried to assign a source to this sound.  At first, it sounded like the crackling of wood burning…which was slightly alarming.  Then, I thought it was someone knocking on the bedroom door.  As the last bit of fog lifted, I realized the rapid tapping sound was coming from the window; it was raining!  I swiveled my legs out of bed and looked out the window; yep, it was raining outside.  Southern California is in the middle of a historic drought, so my confirmation came with a bit of surprise.  I grumbled briefly to myself about the potential downer this could have the day’s journey east, but quashed it quickly.  That’s selfish.

I wandered around the quiet house, wondering if I was the first one awake, when my phone buzzed.  Doug had heard me shuffling around downstairs and sent me a message, wishing me a good morning.  The day got started slowly; after I got ready, I enjoyed coffee, conversation, and homemade biscotti (thanks to Sam!) well past 9:00. I had an amazing breakfast at a cafe right next to the Pacific Ocean, looking out over a harbor.  Cloudy or not, it was an excellent way to start the day.  After all this, at about 10:30, I said my goodbyes to Doug and Oliver and headed north to start my Route 66 journey in earnest.  Originally, my plan was to head straight to the Rancho Cucamonga area (not just because I love saying RANCHO CUCAMONGA) but halfway there, I called an audible and headed for Pasadena.  It would add a few minutes to my day, but I had plenty of time!

The one stop I had marked in there is the old Rialto Theatre.  It’s closed now, and in some disrepair.  I’m glad I stopped; who knows what condition this place will be in next time I’m on the west coast!  It’s a beautiful old cinema with a lot of lovely architectural touches.  From there, I took the Route east, driving through many cities though I still considered myself to be in ‘Los Angeles’.  Honestly, I felt that way until I got to San Bernardino.  It’s just continuous city all the way out there.  Along the way, I made a few stops and consulted my EZ Guide to make sure I wasn’t bypassing anything super cool ‘just off the Route’.  By the time I left the Greater Los Angeles metropolitan area, it was after 2:00 PM.  I kept mapping more destinations, but it wasn’t that big of a deal; I still had plenty of time!

I loved the desert landscape that began creeping into the landscape, and the little towns that the Route snaked through.  Near Cajon Junction, I finally hit a stretch of lonely highway, just me on the road.  Instead of the vast expanse of farm and field I’m used to, I was surrounded by sandy foothills and scrub brush.  By the time I made it to Victorville, I felt like I was One with the Road again, completely separated from the hustle-and-bustle in the City of Angels.  Although their Route 66 museum was closed, I was able to visit a bucket list site in town.  There’s an old truss bridge (yay!) that crosses the Mojave River that was also featured in the Foo Fighters music video (double yay!!) Times Like These.  I hopped around the rocks and sand giddily as I took pictures and marveled at the arched metal truss, which was also surrounded by some great rock outcroppings.

Further north, past Oro Grande, I stopped at the famous Bottle Tree Ranch.  It’s a wonderful little roadside attraction that features dozens and dozens of metal ‘trees’ that are covered in upturned bottles of all shapes, sizes, and colors.  Additionally, the caretaker has scattered a lot of metal lawn art and other sculptures in the yard, creating an environment unlike anything I’d ever seen.  It was as if Samantha’s crafting table at home and Christmas itself had been mixed together.  It was also oddly still, with dark clouds on the horizon and only enough wind to cause the metal in the ranch to creak and spin, as each creation was designed.  It was a magical place and one I could have easily spent hours exploring.  When I returned to the car, I mapped the next town and put the car in gear.  Out of curiosity, I went ahead and mapped my endpoint for the day in Needles, CA; I was shocked when it told me I was still over two hours away! 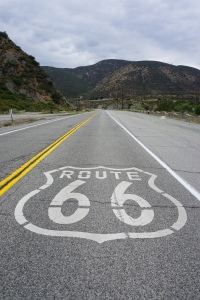 The overcast skies were tricksy; I didn’t know exactly how much light I had left in the day.  It was nearly 5:00.  If I went STRAIGHT to the motel, I wouldn’t arrive until 7.  I had another bucket list destination I absolutely had to visit, which would add at least 30 minutes to that estimate.  I had to make a few tough choices, opting for the interstate as I bypassed a few small towns.  I literally apologized to them as I flew by at 70 mph.  I will very much try to stop by on my way back Sunday.  I hopped back onto the Route at Newberry Springs to capture the sign of the old Baghdad Cafe, and continued on the Route to near Ludlow.  What I failed to realize (though it’s printed RIGHT in my guide) is that this stretch of the Mother Road is horribly paved; I had to slow my speed to about 40 mph to prevent the car from shaking itself to bits.  By the time I hopped back onto the I-40, I was highly upset at myself for getting carried away and having to crunch for time.  Driving the Route is NOT supposed to be a Destination Drive experience.  By the time I pulled back onto the historic highway at Ludlow, I was calmer.  Samantha has been working with me to keep from beating myself up so bad all the time, and it was her voice in my head that settled me. 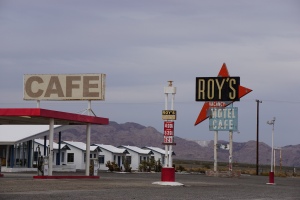 A short while later, I arrived at Amboy California.  Amboy has little more than a post office and an old service station…with a GIANT sign for Roy’s Motel and Cafe. It’s one of the most well-known signs on the Route and another one of my must-see sights in the state.  I had plenty of daylight to get the photos I wanted and stop in the station to greet the owner.  We talked for a few minutes, about the Route and my trip, but I was still aware of the time.  I wanted to try and make it to Needles before sunset.  By the time I hopped into the car and continued eastward, it was after 6:30.  The Route is impassable just east of Amboy (flooding last year washed out a few low bridges that the state is dragging their feet on replacing.  It’s hard to imagine ANY place out there flooding) so I felt less guilty about hopping back on I-40.   Still, I bypassed Goffs, so I said another apology and promised to try and make it up on the way back.  As it was, the clouds were still toying with me by sprinkling some rain now and again. When I pulled into Fender’s River Road Resort in Needles, it was dark enough that I needed my headlights.

My lateness did not dampen the spirits of Rosie, the owner of the motel.  We had corresponded a few weeks ago on one of the Route 66 Facebook groups I frequent and her place was recommended by a few of my roadie buddies.  I could understand why immediately; the motel was RIGHT on the Colorado River, Rosie was super friendly, and the accomodations were more than adequate.  I grabbed a quick bite at the Wagon Wheel Cafe before taking a few minutes to sit by the river.  After my long drive and the few moments of anxiety, it ended in bliss next to the sound of running waters.  Next time, I won’t be so ambitious with my driving plan…but boy did I see a lot of amazing places in a single day.

Lights On at the Blue Whale! #Route66 #OK66 #Oklahoma #TravelOK #Christmas #roadsideamerica
Christmas tree on the Route! Sapulpa, to be exact. #Route66 #OK66 #Christmas
Pupdate: Rex is loving autumn! Though I'm getting tired of chasing him down to take stinkhorn mushrooms away.
Thelma's Bar in #Tulsa used the city's Neon Sign Grant Program to restore the neon on their vintage #sign and kept the cabinet original. I love it! #Oklahoma #Route66 #neon