Waking up with the sun isn’t that difficult when you have a full day of exploration planned.  What IS difficult, for me anyway, is ensuring that I balance my time adequately between wants and needs.  As I wrote about a few days ago, I can sometimes get carried away and take way more time than I have available when I’m road wandering.  Similarly, I can get road vision to a point where I forget to eat.  I ended up snacking today until nearly 3:00 PM, which isn’t healthy.  I am very thankful for my little pack-o-snacks, though.  When I found myself hungry on a dirt road in the middle of a Navajo Indian Reservation, it came in handy.  We’ll get to that.

The day started with checking out of the La Posada hotel.  I spilled coffee all over the serving table in the lobby, THEN knocked my cup over in the car.  It was not a good start.  As I rolled out of town on old 66, I noticed how run down much of Winslow actually is.  Aside from their little “Standin’ on a Corner” pavilion downtown, the rest of town felt dormant.  I’ve been told their museum is nice, but even after I was told where it was downtown I had to reference photos to see it.  They definitely need better signage.

My first stop on Thursday was the Jackrabbit Trading Post.  It, too, was closed…but only because it was early in the morning!  It was delightfully still in business.  Their big yellow “HERE IT IS” wooden billboard is a well-known icon of the Mother Road.  Standing next to it, I had a similar feeling to the one I had in Amboy when I finally saw the Roy’s sign with my own eyes: it felt surreal.  A sight I’d seen so many times from other people was now in front of me.  I carried on east, skipping Holbrook since I’ll be spending plenty of time there this weekend.  The next pin in my map ended up taking me into the Painted Desert National Park.

This was unexpected.  I’d be spending some time in and around the Painted Desert as a part of the Relics Tour on Friday and hadn’t planned to visit separately.  However, I didn’t know if that would include park admission, so I went ahead and entered.  I was floored by the magnificent beauty of the canyons and mesas.  Like the Grand Canyon, a photo just doesn’t do it justice.  I zipped around to all of the photography points, capturing the colorful rocks that stretched to the horizon.  Eventually, I made it to the ruins of an old car, another well-known Route 66 icon, which was the reason I found myself in the park in the first place.  I gleefully took my own photos once again, taking a few moments to appreciate the stillness of the morning in what quickly became one of my favorite National Parks. 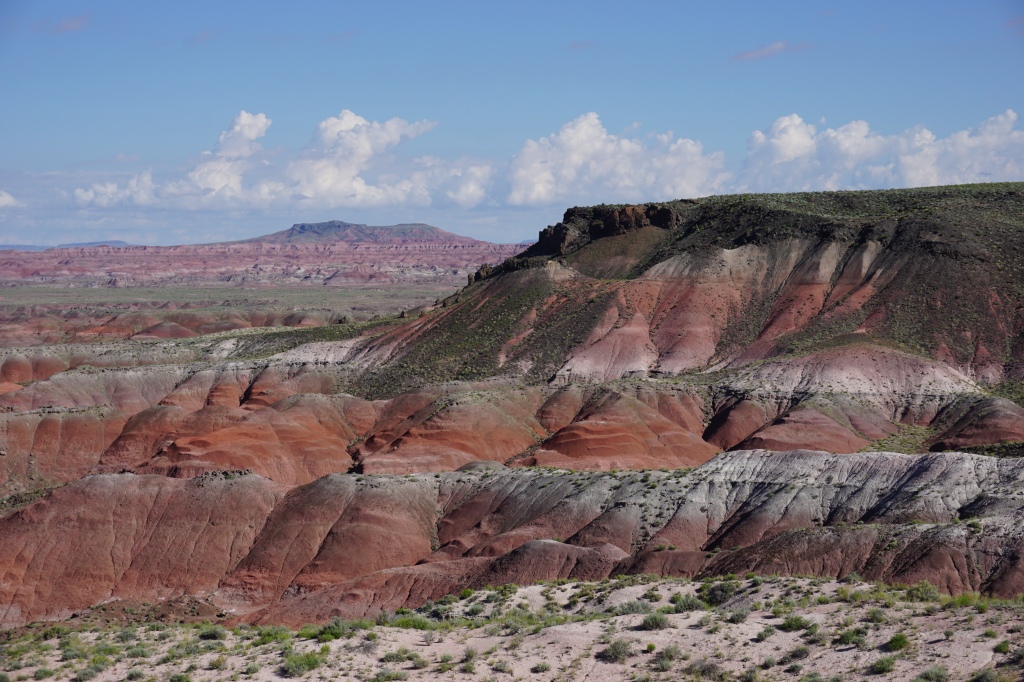 Once I finished touring the basics of the park, I hopped back on Route 66 (which has an awful lot of I-40 sections in eastern Arizona) towards New Mexico.  I came across another abandoned trading post RIGHT on the border, so of course I pulled into the lot to snap some photos. When I returned to the main road, I accidentally hopped on the interstate when there was a perfectly good stretch of old Route 66 to travel.  I ended up missing quite a few miles to that mistake; something else I’ll try to make up on the return trip.  Once I hit Gallup in New Mexico I intentionally used I-40 to reach my easternmost point, seeing as how I should have plenty of time for a ‘return trip’ on Old 66.  My end point was the Rio Puerco bridge just outside of Albuquerque.  Similar to the old truss bridge in Winona, it’s been bypassed but is easily walkable.  Now that it was late morning, it was shaping up to be a beautiful sunny day.  Once I had my requisite photographs and quiet time, I set my sights west. 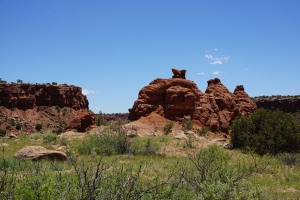 My next stop wasn’t actually on Route 66.  It was made possible by a fellow roadie who also happens to be a big Breaking Bad fan.  In the television show, a few crucial scenes happen on the To’hajiilee Indian Reservation, which is right off I-40 west of Albuquerque.  With his directions, I was able to find the scenic shooting location featured in the very first episode of the series, as well as some pivotal episodes right at the very end.  The road went from asphalt, to gravel, to a very dusty red dirt.  I found myself miles out, among beautiful red mesas and complete silence.  There were homes scattered here and there, but it was very rural.  They seemed friendly enough, considering I know that others have trekked to this location for the same reason.  It was here that I realized I hadn’t had anything but coffee all day, and lunch time was approaching.  Hooray snack bag!  At least it was a granola bar and not, like corn nuts or something. It took about half an hour to re-join I-40 westbound.

I drove through quite a few small towns afterwards, once Old 66 showed back up.  I saw an old Spanish Mission in Laguna that dates back to 1699.  The town of Budville has one gas station that appears to be holding on to life by a thread.  Many abandoned sites dotted the road, some in decent shape and others were completely unrecognizable.  One of my favorites had no building anymore, only two GIANT Whiting Bros. signs.  There was, at one time, a gas station and motel where now there is only only brush and faded concrete.  And two big-ass signs!  As I approached the town of Grants, I noticed a lot of the rocks on the roadside were black.  My EZ Guide tells me they are from a lava flow, which is something I want to research more when I have the time, energy, and reliable Wi-Fi connection to do so. 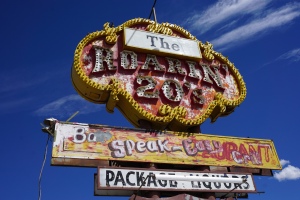 Grants is where I finally stopped to eat.  I made myself eat inside and not take my order to go; I still ate fast (as I always do) but it forced me to slow down a little bit.  Grants itself is full of many classic neon signs.  I must have pulled over more than half-a-dozen times to take pictures and appreciate the detail on these relics of yesteryear.  Some had been restored, but most had not.  My favorite sign looked like it was lifted straight out of 1950s Las Vegas, for a place called The Roaring 20’s.  Considering the store itself no longer existed, it’s safe to say that the 20’s are no longer roaring.  It was an interesting juxtaposition, similar to a later find that had a ‘Historic Route 66’ sign and ‘Dead End’ on the same post.

As I approached the Continental Divide (the place where water decides it’s going to flow either into the Gulf of Mexico or the Pacific Ocean) the beautiful puffy white clouds were less white, more grey, and increasing in volume.  The cold front that had been traveling with me on prior days finally found me again.  The high of 89 I experienced on the Indian Reservation was soon hammered down to about 57 as the rain spigot opened.  Although the rain didn’t last long on my path, the horizon told me there were many other places that weren’t so lucky.

I arrived in Gallup close to 5:30 PM.  I checked into my hotel first, the El Rancho, and it impressed me immediately.  It was built in the late ‘30s and has hosted many-a-movie star over the years; the whole place still felt like Old Hollywood.  The lobby has a real lodge feel to it, with a lot of wooden accents, and the two staircases in the back really tie the room together.  The outside is a sprawling structure, with plentiful neon and blinking lights.  Gallup itself is known for its neon, and once I’d settled in my room I took great pleasure in touring the downtown district to see the lights for myself.  While wandering, I met a man at the train station that was waiting for the Amtrak to take him and his wife back to Irvine, CA.  We had a nice conversation about the revitalization of parts of Route 66 and I marveled at how passenger rail still existed in parts of the country.

After a lovely dinner at the El Rancho restaurant, I tucked in early; the Relics Tour on Friday morning was the whole reason this trip happened in the first place and I wanted to get there in plenty of time, which meant leaving extra early.  I could barely contain my excitement, but the long day ensured I fell asleep quickly.