Thursday night after work, Samantha and I loaded up her Nissan and headed north.  Our final destination was the city of Chicago to attend a wedding on Friday; since the drive would take about eleven hours, we both agreed that driving part way the day before was a GREAT idea.  As we drove I-44 from Tulsa, OK into Missouri we talked about what we wanted to see on our long weekend road trip.  Samantha had never been to Chicago before and I’d never traveled Route 66 in Illinois; we were both very excited about the possibilities in front of us.

We pulled in to the Munger Moss Motel in Lebanon, MO at about 8:30 PM.  The sun had set and the giant neon sign was aglow.  Sam had been introduced to many of my roadie friends at the Springfield, MO festival last week and was eager to meet another: the owner of the Munger Moss, Ramona.  Ramona and her husband bought the motel in 1971 from the original owners (who’d opened it in ’46).  She is one of the Mothers of the Mother Road and it always puts a smile on my face to see her.  She was very welcoming, as always.  We talked about the glacial pace of the town’s progress with Route 66 recognition and development while Samantha toured the office, ogling the pieces of jewelry and numerous collections of trinkets.  After a spell, we received our key and headed to our room.  I expected to see a room nearly identical to the one I stayed in this past March, but when we opened the door to room 24 I was in awe. 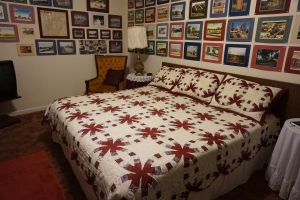 Room 24 is known as the ‘Route 66 Suite’.  Inside, the walls are nearly completely covered with old postcards, photographs, and drawings of nearby Route 66 icons.  The bed, which was about as wide as two lanes of the road itself, was covered with a lovingly crafted quilt that Sam took to immediately.  We were both supremely pleased and pleasantly surprised at the roadside oasis that provided our restful night’s sleep.  The next day, we were up early to make sure we’d be in Chicago in time for the wedding; it was going to be a long (but rewarding) day.

I had planned to just drive 66 on the way home, but when I researched the places I wanted to see I discovered quite a few of them would be closed on Sunday.  Since I didn’t have any earthly idea what time I’d be rolling back through central and southern Illinois, I didn’t want to take any chances.  When we arrived in Springfield, I pulled off the super-slab interstate and pulled in to the Cozy Dog Drive In.  The Cozy Dog is a beloved roadside restaurant owned by the Waldmire family and is also credited by some as inventing the corn dog as we know it today.

Bob Waldmire, son of the man that originally opened the shop, is a Route 66 icon in his own right.  He was a prolific artist, drawing many of the intricate portraits of favorite roadside attractions that adorn postcards to this day.  He was a passionate supporter of the road, not only with his art & cartography but also by reopening the dilapidated Hackberry AZ General Store in the early ’90s.  Although he passed away a few years ago, his presence is still very much felt on the route.  Whether it’s at his memorial display on the Santa Monica Pier, his schoolbus home at the museum in Pontiac IL, or the portrayal of Fillmore the VW van in the movie ‘Cars’ (based on Mr Waldmire) he is still alive and well on the Main Street of America.  I was very honored and awed to stand in the Cozy Dog and admire their art collection, books, and other items as I simultaneously enjoyed a tasty battered hot dog.  Absolutely worth the stop.

Further on up the road, we pulled into community of Funk’s Grove.  Although the town is little more than a collection of abandoned buildings now, it is home to a family that has been harvesting and selling maple syrup (or, sirup, as it’s spelled there) since the late 1800s.  We pulled into their family farm and had a nice chat with one of the owners. If we didn’t have a time table for the day, we would’ve spent an hour talking about the history of their operation.  Alas, we left wanting more…though we did walk away with the largest available container of fresh syrup to take back home.  By the time we finally arrived in Chicago, we had about two hours to prepare before heading to the wedding downtown.  Our host for the night was my dear friend Scott, who I met way back in my AT&T days.  I met him in person for the first time back in 2010, upon my return to the United States after my ten month journey abroad.  Since then, I’ve only seen him once, and that was several years ago.  Regardless of the time that had passed, it was as if it’d only been a few weeks since we’d seen each other.  After a too-short sit down conversation, Sam and I changed from our travelin’ clothes to our fancy duds.  It was time for our night out on the town!

Sam was awed by the variety of architecture in downtown Chicago.  The closer we got to the city center, the more she craned her neck to look at the beautiful skyscrapers of the Windy City.  She was awed by the L tracks and excited to be in such a vibrant place.  When we reached the shore of Lake Michigan, I could tell mixture of the vast expanse of water and the Big City atmosphere was reminding her of New York, and she missed home terribly.  Unfortunately, her moment of nostalgia was short-lived as I hadn’t planned that well for Chicago traffic; we only had twenty minutes to reach the Adler Planetarium and I couldn’t find a point of entry.  My frustration with my progress was evident.  Samantha, ever so helpful and loving, helped calm me down and guided me through the frantic streets. Because of her, we walked up to the Planetarium with time to spare.

The ceremony itself was beautiful; my friends were married in the light of the setting sun, overlooking the Great Lake and the breathtaking skyline of the Paris on the Prairie.  The wedding was themed for their mutual love of travel; the bridal parties’ attire was inspired by vintage airline wear and the tables at the reception all represented various airports.  The refined setting and decor was joined with their geeky passion with music from Lord of the Rings, Princess Bride, and Star Wars as well as some allusions to some familiar movie lines in their remarks and vows.  It was the perfect way to end a great day of our own journey.

The wedding also reminded us that OUR big day is coming up soon.  In only 48 days, I will be the one standing in front of my friends and family, saying ‘I Do’ to the special woman in my life.  Love is patient, love is kind…qualities which Sam very much embodies.  I was thankful for this at the end of our long day, but even more thankful the next day when I had a near meltdown while walking down Michigan Avenue.  More on that next time…

2 thoughts on “The Road to Chicago”