After a lovely road trip through Kansas and a most impressive meal in downtown Kansas City, our rest on Friday night was welcome.  Our bed at the B&B was quite comfortable; had I not set an alarm, I’m certain we wouldn’t have made it up in time for 9:00 AM breakfast.  Thankfully, we got ourselves together in time and enjoyed the company of our hosts and fellow guests with a relaxed breakfast beneath an ornate chandelier, which once hung in a local opera house.

Although the clouds were dreary and the temperature outside was bone-chilling, Samantha and I did not let that discourage us.  We bundled up and headed for the World War I museum, which until recently I had no idea even existed. It seemed that quite a few others had the same idea; we had to park quite a ways away from the memorial entrance. We sped-walked to the entry and I went to open one of the doors.  It was HEAVY!  I had to use both arms to open the dang thing before we could finally get inside.  Once inside, you must cross a glass bridge above a field of poppies to get to the main exhibit hall; until that day I did not know that the poppy flower is used in remembrance to those lost in war.  The exhibits themselves were stunning in their detail and range.  The museum tour starts with a short film that goes over the build-up to the Great War, followed by exhibits from the first four years of combat. After another short film on how America got involved, the other half of the exhibits were dedicated to American memorabilia.  The section with dozens of propaganda posters was particularly interesting. 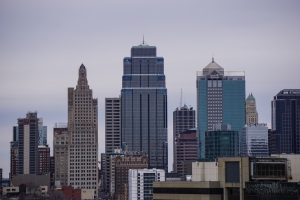 When we finished looking at the main exhibits, we tried to go up to the top of the Memorial Tower…but it had been closed down due to the cold and wind.  The view of downtown Kansas City was still stunning from the base of the tower, though, and I stood in the bitter wind for a few minutes to capture it.  After spending a little over two-and-a-half hours at the museum, Sam and I were both famished.  We ate lunch at a barbecue place that had been recommended to me called Jack Stack’s.  Their closest location was inside a re-purposed train station, which appealed to me also.  The food was good, but I admit I was a little disappointed.  The burnt ends were good, but the ribs were a little tough.  Sam liked her food well enough, and I’d probably go back…but I’ve yet to find any place as good as Burn Co in Tulsa.

Our next destination took us out of the city to a small town just north of the Missouri River called Parkville.  The allure of the suburb was, funnily enough, a park.  Inside the park was one of only two Waddell ‘A’ truss bridges left in the world.  It was built in 1898 as a railroad bridge in Trimble, Missouri.  Abandoned in 1939, re-purposed as a highway bridge in 1953, and dismantled some time in the 1980s. It wasn’t destroyed, thankfully; in 1986, the city of Parkville raised funds and volunteers to take those parts and rebuild the bridge as a pedestrian walkway in their English Landing Park.  It’s an excellent example of a community coming together to save a bit of history.  I am so happy it’s there and in such good shape; the other remaining Waddell ‘A’ truss is in Shreveport Louisiana and in very poor condition.

When we’d arrived in town, both of us had noticed how quaint the downtown district was; it reminded me of a Colorado mountain town.  Once I’d had my fill of the ‘A’ bridge, we parked on Main Street and walked through a few shops.  One antique store consisted of two train cars fused into a wooden building; the whole interior was connected!  When a train rolled by on the tracks outside, the whole building rumbled around us.  We toured several other antique stores and local boutiques before resting at the local coffee shop, which President Obama had paid a surprise visit back in 2014 according to a newspaper article proudly displayed at the counter.  The coffee was roasted locally by the folks there, too, and it was super delicious.  I wish I’d bought some beans and brought them home!

One of the shop owners in Parkville recommended a local goods shop in Kansas City’s Brookside neighborhood, so that’s where we went next. We arrived at ‘Stuff’ just as night fell; although it was about ten minutes from their close of business, the workers were very kind and encouraged us to look around as long as we liked.  We got to talking to them about our weekend and they had another recommendation for us:  Prospero’s Books.  That’s how we found ourselves wandering the three labyrinthine levels of a great used book store on KC’s trendy 39th Street.  We celebrated the end of our day with a slice of New York Style pizza across the street, which is just about the only thing Sam likes better than a good book.

When we arrived back at the B&B, the house was quiet.  We slept soundly and awoke on Sunday refreshed, but with a twinge of sadness; we didn’t want to go home!  Breakfast was lovely; Stephan made french toast special since he learned Sam wasn’t fond of eggs.  We met the other two couples that had stayed over Saturday night (as a change, now WE were the older couple) and sat talking at the breakfast table for more than an hour after the meal was finished.  We said our goodbyes and assured the owners that we would return someday.  They encouraged us to bring some Braum’s Ice Cream when we do! 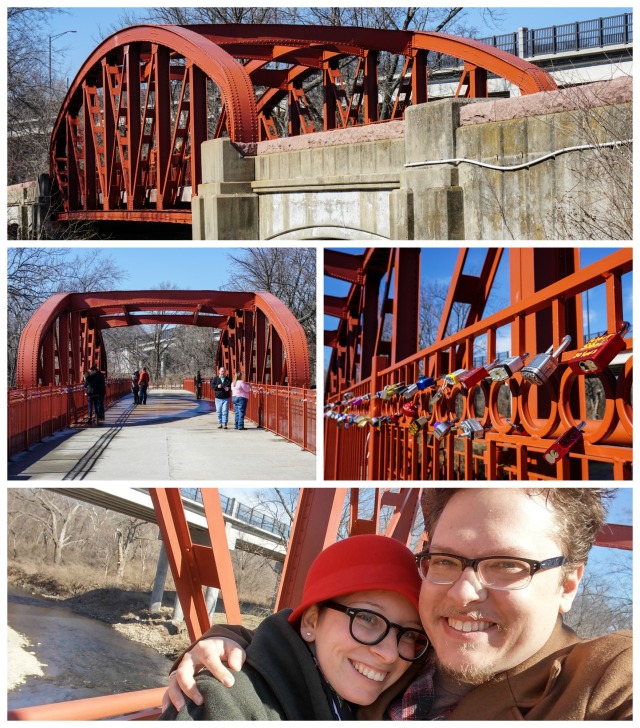 On the way out of Kansas City, we stopped at one more bridge I’d marked on my map.  Known as the Old Red Bridge, it has become a sister site to the Pont des Arts bridge in Paris where couples attach padlock to the bridge as a symbol for their commitment to each other.  Since it was Valentine’s Day, the bridge was pretty busy.  We had no lock with us, so we locked lips instead.  The drive home was beautiful, as the temperature warmed far beyond the previous day.  We drove through a town called Peculiar, saw several more beautiful courthouses, and drove past Harry Truman’s birthplace.

After we’d crossed back into Oklahoma on I-44, I saw the highway marker alerting us that we were approaching Afton.  I exited the Interstate as if on auto-pilot, taking old Route 66 through the countryside and stopping for a few moments at the D-X service station that I knew so well. It was dark and still.  I stood atop the painted Route 66 shield on the asphalt and remembered my friend Laurel; I wished we could visit one more time.  I hopped back into the car and Sam took my hand as I pulled back onto the road towards home.

We made a lot of new memories over the weekend.  It’s so nice to be on a work schedule that allows us to spend more time together.  We’d already started talking about possible destinations for our next trip and were both excited about what 2016 had in store for us.

Rhys Martin was born in Tulsa, Oklahoma in 1981. In 2009, he sold everything he owned and left the country, living out of a backpack for ten months. He discovered a passion for photography while traveling throughout Southeast Asia and Europe. After returning home, he looked at his home town and Oklahoma heritage with fresh eyes. When he began to explore his home state, Rhys turned his attention to historic Route 66. As he became familiar with the iconic highway, he began to truly appreciate Oklahoma’s place along the Mother Road. He has traveled all 2,400 miles of Route 66, from Chicago to Los Angeles. He has also driven many miles on rural Oklahoma highways to explore the fading Main Streets of our small towns. Rhys has a desire to find and share the unique qualities of the Sooner State with the rest of the world. Cloudless Lens Photography has been featured in several publications including This Land, Route 66 Magazine, Nimrod Journal, Inbound Asia Magazine, The Oklahoman, and the Tulsa World. In 2018 he published his first book, Lost Restaurants of Tulsa. Rhys loves to connect with people and share his experiences; ask him about enjoyable day trips from Tulsa, locations along Route 66, and good diners or burger joints along the way.
View all posts by rhysfunk →
This entry was posted in Travel, Uncategorized and tagged bed and breakfast, bridge, kansas city, memorial, Missouri, Parkville, road trip, World War I. Bookmark the permalink.