I don’t get over to Arkansas very much, which is a little odd considering the state is only an hour away.  Although I love to travel, I rarely make Arkansas a destination.  Really, the only place I can think of that has become a multiple-stop destination is the War Eagle Mill and Bridge near Rogers.  When my wife told me she had a craft show coming up in Springdale, I didn’t have a huge list of places to see out that direction.  It’s amazing what you allow yourself to find when you drive a little slower and have fewer ‘must see’ destinations! 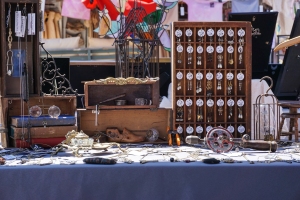 This was the first time Samantha’s been at the Little Craft Show with her steampunk jewelry.  Normally, it’s a winter craft fair; this was the first year they had a spring show.  Samantha hasn’t been able to attend the winter show due to overlap with one of her favorite local Tulsa events and was very excited to be representing her jewelry at a new event.  It went really well!  Springdale has been working hard to revitalize their downtown (like many Route 66 towns I’m fond of) and the results were apparent by the consistent foot traffic for the festival.  Everyone was in great spirits!  We had a lot of great conversations and the articulate nature of Sam’s jewelry was well-received by fellow artisans.  It felt good to be helping HER out for a change instead of the other way around. The local paper wrote about her work here and her jewelry website is here. 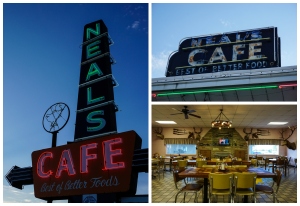 For dinner on Saturday, we ate at a place called Neal’s.  It had been recommended by a show-goer as a good local restaurant and I’m always eager to try a new cafe.  The magnificent neon sign outside pointed to a modest pink building, and when you walked in it felt like you’d walked into an old kitchen.  The staff was super friendly (even though we arrived about 1/2 hour before closing) and the food was DELICIOUS!  The chicken that Samantha got literally tasted just like the kind my grandmother used to make.  I talked to the owner for a few minutes and he said it’s the oldest family-owned restaurant in the state.  We’re already planning our next trip to Springdale around their Daily Specials on their menu. Instead of heading straight home on Sunday morning, we took a road trip. I had a single stop mapped an hour south of town in the Boston Mountains.  We ate breakfast at a place called Susan’s, where all of the waitresses wore pink corsages for Mother’s Day.  I had expected a long wait but we were able to snag a seat at the counter immediately.  The coffee was good, the people watching was better, and the breakfast itself topped it all.  As I mentioned earlier, a loose itinerary means you can explore a little more on the journey.  Past the community of West Fork on Hwy 71, I saw a ‘ROAD CLOSED’ sign on a side-road in my rear view mirror.  I stopped, turned around, and drove back to that side road to find an old truss bridge.  It was closed to all traffic and I was sure demise was imminent; I later discovered that West Fork is going to move it and install it as part of their walking trail network.  I can’t wait to see it once that happens! 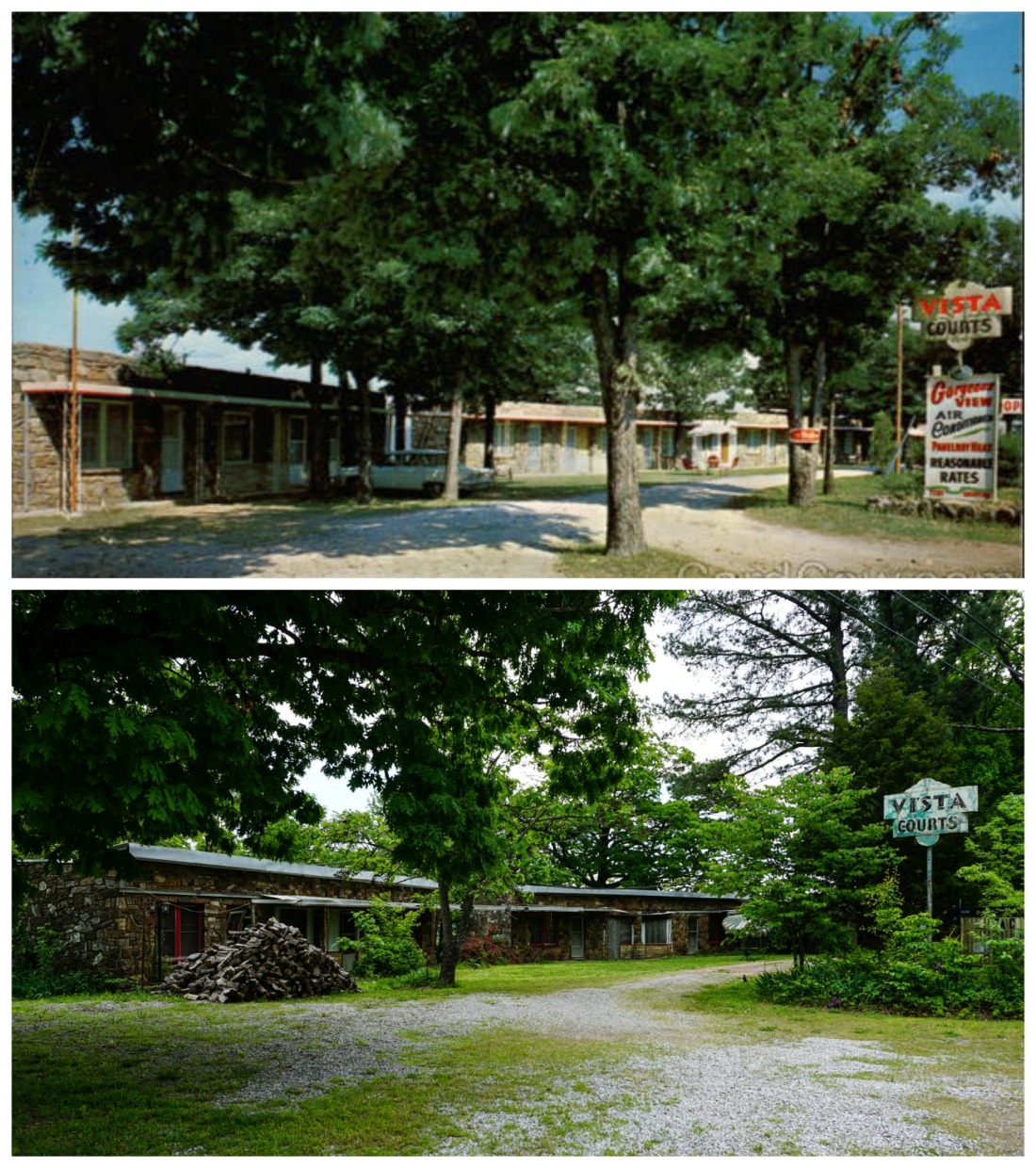 Continuing south, the trees thickened and the elevation increased.  We drove past Winslow (nary a corner to be found with a population of 390) and through the seemingly abandoned community of Mount Gaylor.  It’s a shame that everything was closed tight, as there was an inaccessible observation tower that overlooked the entire area.  I did find an old motor court called Vista Courts, which I gleefully explored.  The old neon sign was still standing and the grounds were somewhat kept.  When I got home, I found an old postcard photo and compared the two.  How amazing would it be to run a tourist court in such a location?  I’d still rather be somewhere on Route 66, but the cool air sure was refreshing. 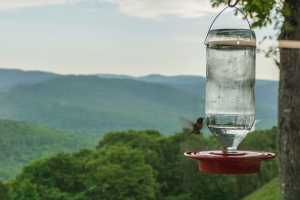 My single planned stop was next: Artist Point.  It’s a gift shop that offers a spectacular view of the surrounding forest and distant Lake Fort Smith.  The shop itself is filled with hand-made goods (I bought some preserves and apple butter for Mom) and the back of the shop is a huge picture window overlooking the valley.  They even had a pair of binoculars to look through.  A hummingbird feeder was hung off to the side, and as I admired the landscape a little bird flew up and had a drink.  It was a lovely moment that reminded me of summers in Pawhuska, watching hummingbirds at my grandma’s house. I want to return to Artist Point in autumn to see that vast expanse of foliage as it changes color.  We talked a lady there for a minute before heading out and I mentioned my love for old steel bridges.  She told us about one to the west near a town named Natural Dam.  I thanked her for the information and headed straight for it.

Granted, heading straight ANYWHERE on those winding mountain roads takes a while.  Samantha and I equally enjoyed the peaceful, winding journey through the countryside.  We stopped for ice cream in Mountainburg, wove south near Fort Smith, and headed towards Natural Dam through the Ozark National Forest.  The aforementioned bridge was beautiful!  It has recently been repainted and offers a nice dark grey contrast to rich plant life around it.

Since we were IN Natural Dam, we decided to take a quick look at the namesake geological feature…and I’m so glad we did.  It’s about 200 feet wide, has a little waterfall, and is very easy to access from the road. In fact, there were more than a dozen folks relaxing and swimming at this picturesque location.  It’s a great spot for picnicking, which we plan to do some time in the future.  This would be a great place to stop on our trip to see Artist Point in the fall! Shortly after leaving Natural Dam, we crossed back into Oklahoma.  We stopped briefly in the town of Westville so I could capture an abandoned Phillips 66 station and drove through Main Street.  A tattered banner advertised Loyalty Day Celebrations, but the thoroughfare was completely devoid of activity.  As we reached the end of the main drag, I suddenly noticed four or five very colorfully dressed people dancing on the side of the road.  At first, I thought they were clowns, but when I got closer I realized that was not accurate.  They looked like a Mexican version of a Native American dancer, only with Japanese kabuki masks.  They were waving and holding signs that appeared to be in Spanish, and I’m sad that I didn’t get pictures of them.  It was quite a juxtaposition seeing these vibrant, colorful people in a completely main street.

The rest of the drive home was quiet, aside from a little rain.  It was Mother’s Day, so we met up with Mom to give her some gifts and tell her about our trip.  It was a great weekend and a needed reminder that there’s a lot of natural beauty just east of me…all I have to do is point the car that direction and seek it out.