Friday morning, I got up early as usual.  However, instead of heading into the office, I headed south on Highway 75 towards Dallas.  I had tickets for a concert in the heart of Big D and I had an entire day to wander south, through Oklahoma and North Texas.  There were plenty of places marked on my map to see and that meant the earlier I left, the better.

I spent an hour in the car before I arrived at my first stop.  East of Dewar (a bustling metropolis of 818 residents) lies an abandoned K-Parker style truss bridge over the Deep Fork River.  Although the approaching roadway was obliterated over a decade ago, it’s still pretty easy to access from the modern alignment.  The ends of the span were blocked by fencing, but there were clear paths around one side.

Aside from the weeds, the bridge was in pretty good shape. The concrete around the edge of the deck was crumbling, rust had started to encroach on some of the support beams, and there was a lot of graffiti…but overall it was still pretty stable.  In fact, right out in the middle of the bridge, bits of burned wood and ash betrayed a campfire that had taken place not long ago.  Below the bridge was a rudimentary boat ramp that looked like it had been used recently; my guess is that this old bridge is still quite the landmark for locals.

Further south, I detoured off the turnpike and took a winding country road to the town of Hanna.  This burg clocks in at 130 residents; as I approached  the structure I’d driven out there to see, I wondered if ALL of them had decided to park in front of it.  The corner of Broadway and Country Side Rd is home to the abandoned shell of the Cochran Building.  An engraved stone at the top of the facade dates the building at 1913, which was in the middle of the tiny town’s boom years.

It once housed a dry goods store & an apartment above.  Today, though, I’d be surprised if even birds nested in the bare concrete skeleton.  A few good ol’ boys watched me from chairs across the street in front of a little convenience store, undoubtedly dumbfounded by this city boy wandering around their old building with his camera.  I waved, they waved back, and they kept on watching until I got back into the Mustang and headed back towards the interstate.

On the way out of town, I came across an old service station complete with pumps!  They were almost entirely consumed by the overgrowth and I was happy that I’d been paying attention.

My next detour took me through the towns of Coalgate, Lehigh, and Atoka.  I love seeing what has survived in these rural communities. Sometimes there’s barely evidence that a town exists, but other times I’m shocked at how alive these little towns are.  Coalgate was positively bustling with activity. They had a great little downtown with brick streets, ghost signs, open businesses, and enough traffic to make me have to wait to turn.

Although the latter two towns weren’t nearly as busy (save Atoka’s place as a traffic artery for Hwy 75 & 69) they each had their own charm.  Atoka even had an old Phillips 66 station downtown that has been converted for use by their Chamber of Commerce!
After that, I had to drive straight to Dallas to make sure I arrived in time for the concert.  I wasn’t really sure what to expect, as the performer I was heading to see wasn’t a traditional musician; he was a movie director and score composer!  Not only that, but his films were one of the first things my Dad and I bonded over.  The man I’m talking about is John Carpenter.

He is responsible for a tremendous output of classic horror & action movies in the late 70s and 80s: Halloween, Escape from New York, The Thing, Big Trouble in Little China, They Live, Prince of Darkness, and more.  His movies & music were the first things I ever collected.  Not only did I have the opportunity to see him perform his iconic music LIVE (along with new work he has composed with his son) but I’d coughed up a little extra dough for a VIP ticket, meaning I would get to MEET the man himself!

I was beside myself with excitement when I arrived at the Majestic Theater that afternoon.  I stood in line with like-minded Carpenter geeks and the time passed easily as we talked about our favorite films and their meticulous details.

When I finally made it up to meet Mr Carpenter in person, I handed him a record cover to sign (Escape from New York original score, my favorite) and told him about the first time my Dad called me into the living room to watch something with him.  It was the introduction scene in Escape from New York; the passion my father had shown for the movie sparked my love of film (and electronic music) and the rest of Carpenter’s work.  Mr Carpenter liked the story and we talked a little about the impact of his work before we shook hands.

He famously doesn’t smile for pictures, but he was really happy to be performing.  When he and his crew (including his son and godson) took the stage a few hours later, my expectations were surpassed.  It wasn’t just an old guy on stage pressing buttons on a keyboard, it was a full band:  two guitars, a bass, drums, and two keyboards.  The composer himself was front and center and he bopped around as he played, clearly having the time of his life.  He was on his feet for 95% of the night, which is pretty great considering he’s 68 years old. 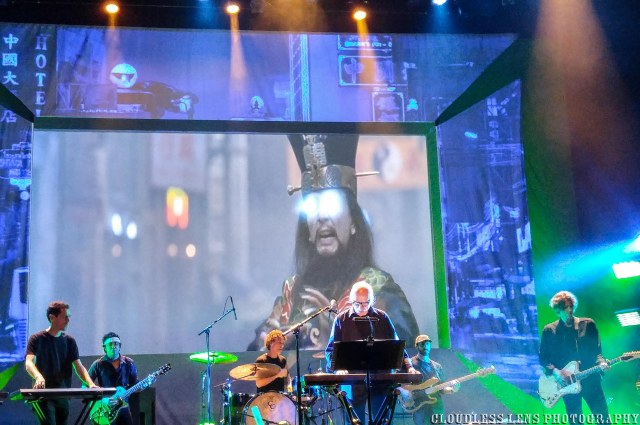 I went to bed last night in a Dallas hotel, in awe of the experience.  It was well worth the cost and something I’ll never forget.

Rhys Martin was born in Tulsa, Oklahoma in 1981. In 2009, he sold everything he owned and left the country, living out of a backpack for ten months. He discovered a passion for photography while traveling throughout Southeast Asia and Europe. After returning home, he looked at his home town and Oklahoma heritage with fresh eyes. When he began to explore his home state, Rhys turned his attention to historic Route 66. As he became familiar with the iconic highway, he began to truly appreciate Oklahoma’s place along the Mother Road. He has traveled all 2,400 miles of Route 66, from Chicago to Los Angeles. He has also driven many miles on rural Oklahoma highways to explore the fading Main Streets of our small towns. Rhys has a desire to find and share the unique qualities of the Sooner State with the rest of the world. Cloudless Lens Photography has been featured in several publications including This Land, Route 66 Magazine, Nimrod Journal, Inbound Asia Magazine, The Oklahoman, and the Tulsa World. In 2018 he published his first book, Lost Restaurants of Tulsa. Rhys loves to connect with people and share his experiences; ask him about enjoyable day trips from Tulsa, locations along Route 66, and good diners or burger joints along the way.
View all posts by rhysfunk →
This entry was posted in Oklahoma, Texas, Travel, Uncategorized and tagged abandoned, Atoka, bridge, Dallas, Hanna, John Carpenter, Lost Themes, Majestic, Majestic Theatre, oklahoma, Phillips 66, road trip, rural, service station, small town, Texas, The Horror Master, travel, truss bridge. Bookmark the permalink.