Sunday was going to be a lazy day.  I haven’t taken a lot of road trips lately, though, and when I woke up that morning I knew the day was going to unfold differently.  All it took was a photo in the Tulsa World to inspire me to head out.  I told Samantha I shouldn’t be long, though she encouraged me to take as long as I wanted.  She knows me better than I know myself; I was gone much longer than I anticipated.

The photo that I’d seen in the paper was taken during the annual National Indian Taco Championship in Pawhuska on Saturday.  It wasn’t the festival that interested me; rather, it was the fact that one of my favorite buildings was undergoing renovations.  The Triangle Building sits in the middle of the Osage County capital.  It was built in 1915 on a small, triangular parcel of land that was left over as the rest of the town developed.  Back when oil money ran thick, this five-story structure housed over 100 lawyers.  The south side of the building spans 62 feet and it narrows to 16 feet, pointing like an arrow northwards towards the Tallgrass Prairie.  It’s the first piece of architecture that awed me as a child.

The building has sat empty for the entire time I’ve known it, as has much of downtown Pawhuska.  It narrowly escaped demolition in 2004 and has recently (finally) started down the road to restoration.  I was happy to see most of the formerly boarded-up windows as empty holes, ready to receive fresh glass.  I took a few minutes to walk around the rest of downtown Pawhuska, which was fairly quiet.  The only activity came from the soon-to-open Pioneer Woman Mercantile, a deli/bakery/general store for the town’s most famous resident.  It’s going to bring more life back to town center and I couldn’t be happier.

I had no other stops planned for the day, but I decided to drive east to Bartlesville rather than head straight home.  When I reached city limits, I checked my map to see if I had anything marked.  As it turned out, I did; Sooner Park is home to a piece of Bruce Goff architecture.  It’s not a house or a church, however:  it’s a play tower.  In 1963, a member of the Price Family (also responsible for the Price Tower, Frank Lloyd Wright’s only realized skyscraper) commissioned Goff to create a space-age themed gift to the children of Bartlesville.  Standing over 50 feet tall, it consists of an enclosed spiral staircase leading to a platform within a wire sphere.  It shares historical similarities with the Triangle Building, closing due to deterioration in the 1990s before being restored in time for its 50th Anniversary.  It stands proudly today and I enjoyed climbing the staircase for myself where I was rewarded with a beautiful vista of the surrounding area.

Once again, I was faced with heading straight home or making another stop.  Although it was lunch time (and I absolutely love eating at Murphy’s any time I’m in B-ville) I decided to make one more stop.  I’d heard about a small Old West town tucked away on a ranch a few miles out into the countryside.

When I arrived at the home of  Kenneth Tate, the owner, he was preparing to give a local family a tour.  He invited me to tag along and I giddily accepted, not fully knowing what I was getting into.  We caravaned down a gravel road for about two miles before reaching Prairie Song; my jaw hit the floor as I realized how expansive the town actually was.  Not just facades, either: each building is fully realized (Mr. Tate boasted that the bank walls were three bricks thick) and stocked with period-appropriate furniture, implements, and decor. Many of those items were procured from local sources, too.  It’s a living museum! I cannot do justice to the place, so I’ll share a few photos.

Inside the Blacksmith Shop

This roulette wheel in the Saloon came from Coffeyville and dates back to the 1890s. 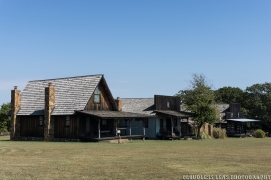 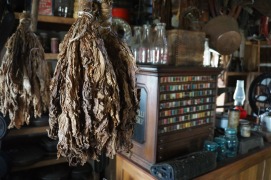 Screen-used wagon from the old TV show Gunsmoke; it was Doc’s!

What started with a single cabin relocated from Silver Dollar City in 1983 has blossomed into 30+ hand-hewn buildings built over the last several decades.  It’s a one-of-a-kind experience, and Mr. Tate (now in his 80s) took great pride in giving us a detailed tour of each building.  It was so detailed, in fact, that three-and-a-half hours later I had to excuse myself before we were finished.  I had to get back to Tulsa for a dinner engagement and I hadn’t had but a small package of little chocolate donuts and a cup of coffee all day.  I have to return to Prairie Song, soon, with Samantha in tow.  She will absolutely love it!