Friday morning, I woke early.  5:00 AM early, in fact. I had a decision to make.  Should I drive straight home, or should I map a full day of driving? I had a few locations saved that I could detour to see, including a theatre in Poplar Bluff that’s been on my list for YEARS. 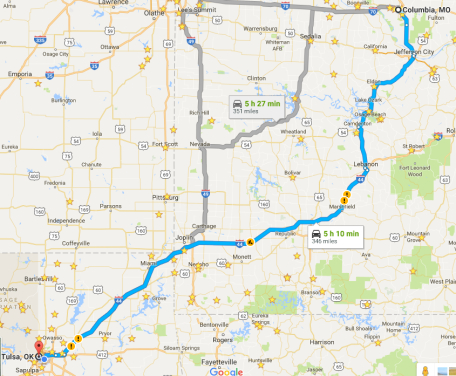 It would double my drive-time, but I told myself if I got up early enough it should be fine.  Since I awoke with no problems before the sun came up, I opted to divert through Poplar Bluff. I checked out of my hotel in Columbia with a quickness and headed east.

It was peaceful watching the sun rise as I cruised along I-70; the clouds were thin and the light was beautiful.  It was less peaceful as I approached the St. Louis metro area as rush ramped up. I skirted the edge of the Gateway City, though I did hop on classic Route 66 for a short time to see a neon sign. Spencer’s Grill in Kirkwood opened in 1947 and claims to have the oldest working clock in a neon sign west of the Mississippi.  My aggressive timetable didn’t allow for me to stop and enjoy breakfast, sadly, but I was happy to see the sign lit up for myself.  I’ll have to come back when I’m hungry!

From the St. Louis area, I headed south.  I passed through a few small communities, avoiding detours until near the town of Bonne Terre.  In the rural farmland of eastern Missouri I came across a beautiful sight:  a stone arch bridge.  Not just one arch, either:  this was the Seven Stone Archway Bridge over the Terre Bleue Creek.  It was built in 1932, pre-dating the large amount of stonework built by the Works Progress Administration during the Great Depression.  It’s in great shape and I had the area to myself as I admired the craftsmanship of this unique bridge. 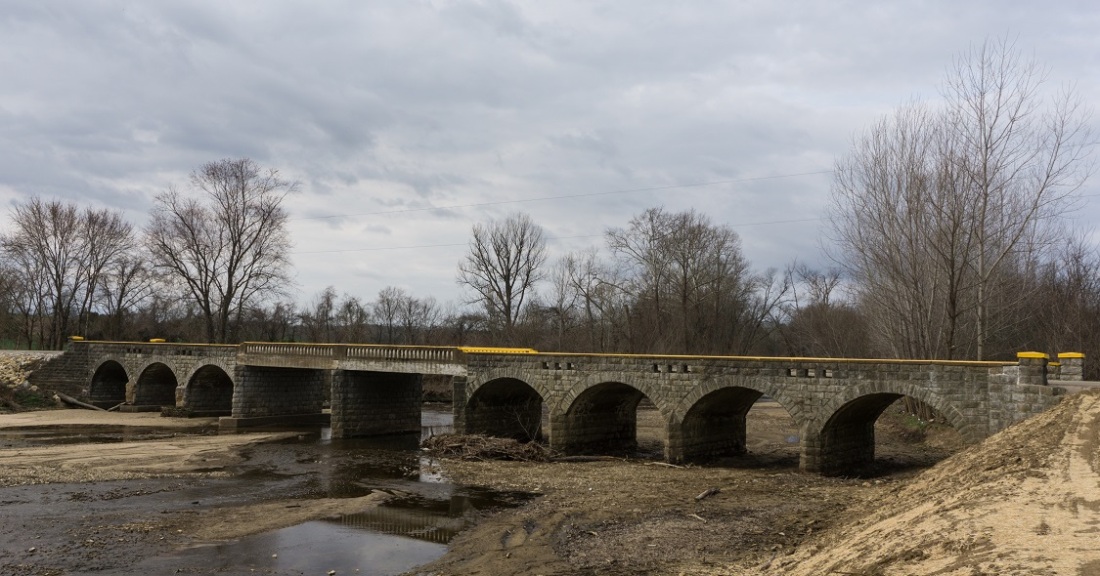 I made another quick stop when I saw a neon sign out of the corner of my eye in the small community of Cherokee Pass.  Although it was closed for the season, the Dog N Suds Drive-In looked beautifully well cared for.  Turns out it was restored a few years ago; it’s the last Missouri location of an old chain from the 1950s.  It’s a shame it was closed; I’d love to have sampled their food. 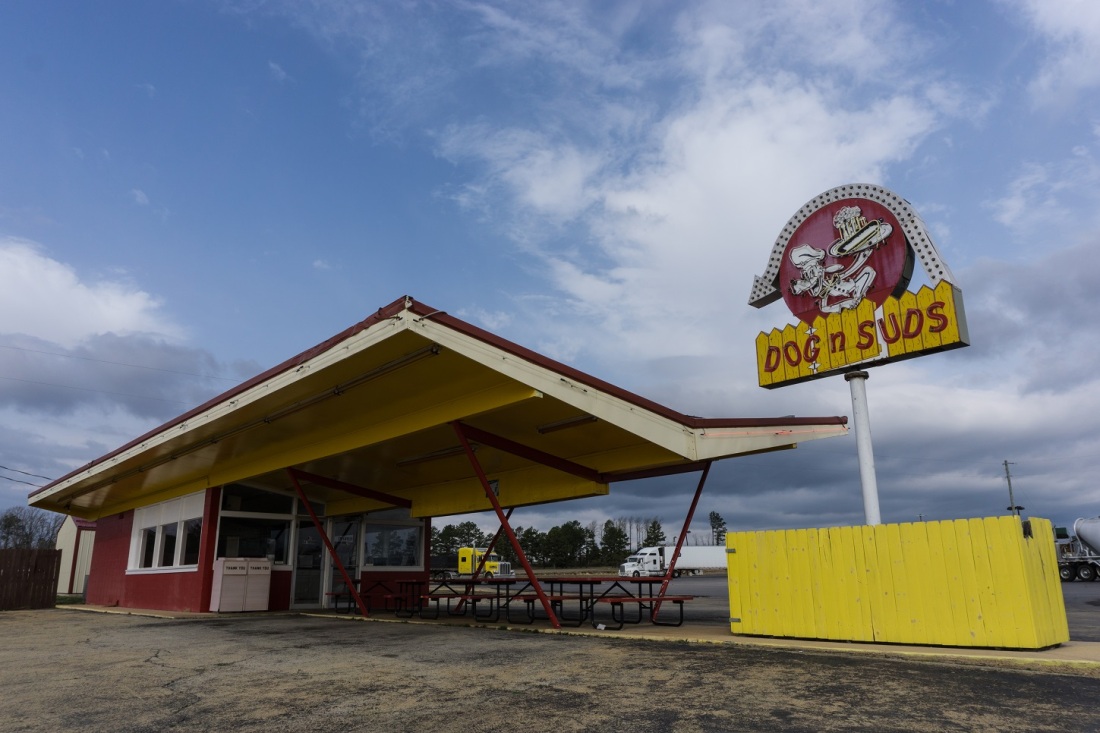 Finally, around 10:30, I arrived in Poplar Bluff.  I stopped near the Black River to capture a few shots of an abandoned Frisco railway bridge.  It’s a skewed truss, which I love.  Evidently it’s been abandoned since the late 1960s.

The Rodgers Theater, though, was the whole reason I took such a drastic diversion through the state.  The theater dates back to 1949 and hailed as the best between St. Louis and Memphis.  A friend of mine that grew up in Poplar Bluff mentioned that he’d seen all three Star Wars movies at that theater when they were first released.  Today, it’s still open and hosts live performances along with community events.  The exterior is a little worn, but, it’s still a gorgeous cinema front.

I left Poplar Bluff rather quickly, as I had a long way to go.  I stopped for gas in the town of Doniphan, which was an adventure in old-school manual gas pump operation.  The road west, Highway 142, turned into quite a ride.  It’s just north of the Arkansas border and I don’t know if it qualifies are part of the Ozarks but it was exhilarating.  At one point, a new silver Mustang came up behind me and we zipped down the curvy hill roads together, like two wild horses.  I was a little sad when they veered off down another rural road. 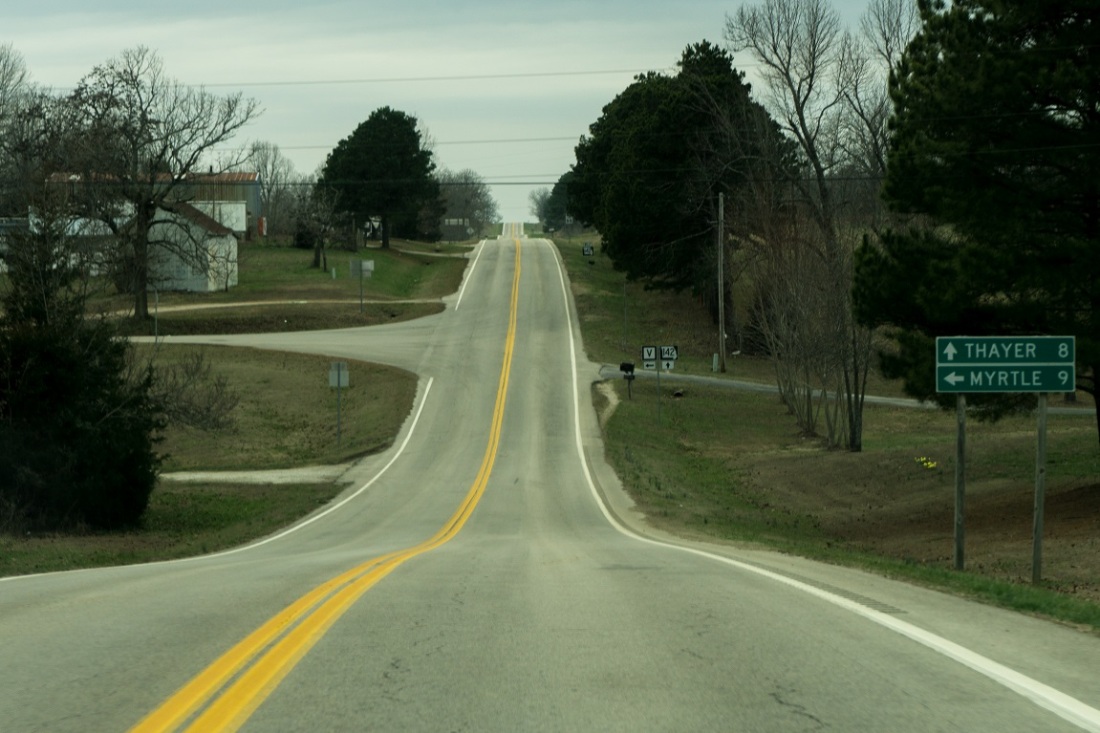 The reason I’d taken that particular highway west was to see yet another truss bridge, this one in Thayer.  It’s a single-truss span w/ a pedestrian walkway on the side.  I actually didn’t even get out of the car, which sounds crazy in retrospect after that drive…but I was starting to get tired.  I had been driving for seven hours, almost straight, and I still had four to go before I could rest.  And that’s not counting the hours of driving I’d already undertaken earlier in the week!  So I diverted north to take the quickest route home.

I resisted the urge to divert through small towns and explore for most of the rest of the way home.  I wanted to get home by dinner time; I missed Samantha something fierce.  The only exception occurred as I got close to Springfield.  I was driving past the town of Fordland, which I thought sounded like a one-note automobile theme park, when I saw a row of rusted relics along the side of the highway.  I pulled a u-turn and took a few minutes to capture them.  The little junk store they sat in front of was closed, thankfully, or I’d have been tempted to scour the inside.

I arrived home a bit after 5:00 PM, just a few minutes before Sam got home from work.  Over the course of the last few days, I’d driven 1401 miles.  The Mustang did very well, not a single problem out of it for the entire drive.  It’s getting close to 160k miles and I worry in the back of my head that one day it’s just gonna give up.  But that was not this day.  It drives on, taking those winding roads with gusto.