(other installments of this series here)

I had set my alarm for 7:00 AM Wednesday morning, but it turned out that I didn’t need it.  I woke shortly after sunrise, eager to start the day.  I ‘enjoyed’ a cup of hotel room coffee before joining Michael for breakfast on the 18th floor of the Sheraton.  My eggs and bacon were decent as I listened to a story about Bob Waldmire parlaying with a tortoise on the deserted Main Street of Glenrio, many years ago.

At 9:30, we walked into the office of 41 Action News KSHB for a segment on Kansas City Live.  After getting checked in, we walked into the studio to await our turn.  Similar to Springfield, one of the anchors would be talking to Michael about the book and a local talk/book signing event later in the day.  The studio itself was a remarkable scene: Michael’s interview was sandwiched between a steak cooking segment, a DIY bit complete with functioning power tools, and a group of seven young Greek Festival dancers in bright clothing.  Who says the book biz isn’t exciting? 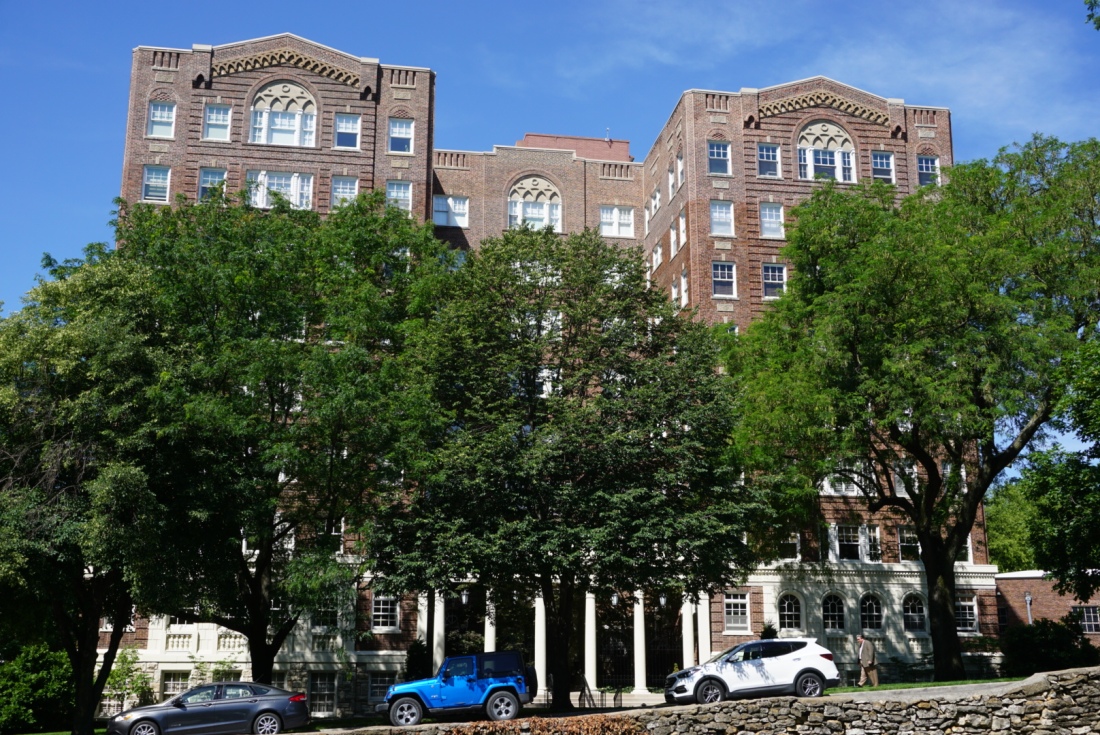 Afterwards, as we walked back to the car, Michael had a suggestion.  His condo building in Tulsa, the Sophian Plaza, had a sister building in KC.  He thought he had spied it on the way into town and would love to inspect it closer.  I had no idea such a building existed & was happy to oblige.  The Beaux Arts structure in Kansas City was built in 1922, four years before the Tulsa counterpart was built.  He took great pleasure in pointing out detailed differences, such as the greater number of historic windows remaining in the Missouri sibling.  It was a delight to see; I may never have known it even existed had it not been for Michael’s foreknowledge.

When the subject of lunch came up, we both agreed that some good Kansas City barbecue was a great idea.  Although we had asked the doorman at the hotel the previous night and Michael had queried the news anchor after his interview, Michael was not yet ready to commit to a destination.  He put his hand on my shoulder and said, “A reporter knows to always get three sources.”  We asked a different member of the hotel staff the same question.  It was unanimous: all three people recommended Joe’s Kansas City BBQ.  Indeed — it was terrific.  Some of the best pulled pork I’ve ever had.  Even though it was associated with Oklahoma Joe’s for a long time, the food in KC is vastly superior to the Tulsa restaurant, which is actually owned by entirely different people.  Long story!  As a bonus, Joe’s KC is in an old gas station. 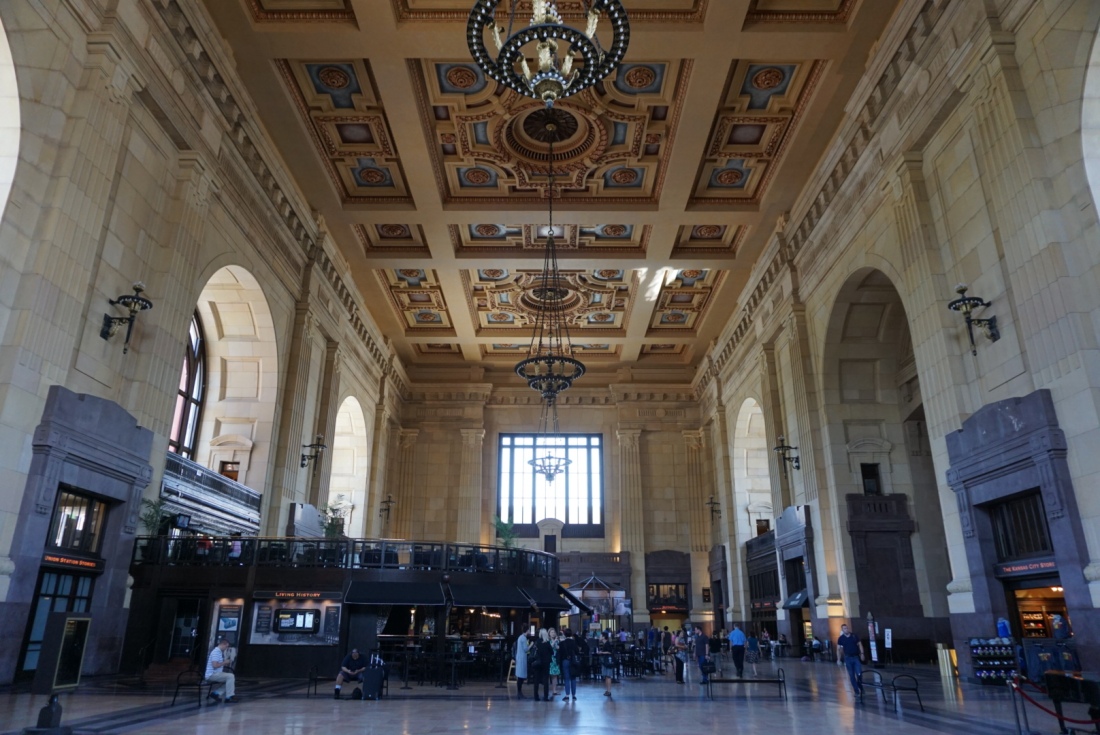 Since our only other commitment was at 6:00 PM, the afternoon was wide open.  I had a few neon signs and other sites marked around town and Michael was eager to share in my exploration.  Our longest stop was at Union Station, the site of the infamous Kansas City massacre.  Michael researched that event extensively for his book about Pretty Boy Floyd; he took me around the outside and pointed out pockmarks from tommy gun bullets on that terrible day.  “Floyd did NOT do it,” he insisted.  I have yet to read that book, as it’s still packed from my move back home…but now that I have some additional context, I am more eager than ever to sit down with it.

Since Michael had shown me so much already, I decided it was time I show HIM something.  We took a short drive up to Parkville, a town that I’d visited with Samantha last year.  On the bank of the Missouri River, in a little park, sits one of two remaining Waddell ‘A’ Truss bridges in the world.  Parkville saved it from the wrecking ball in the early 80s and moved it to their little park for pedestrian use.  Michael read the historic information markers with great interest and marveled at the steel construction at my side.

He looked over the side of the span and smiled at a flock of geese as they floated beneath us.  That smile, so contented and genuine, remained as he identified birds in the trees and looked out at the Missouri River.  It was then that I saw a Michael Wallis that I’d never seen before.  Quiet, contemplative, appreciative; it was a simple zen in the afternoon sun.  The moments were fleeting; a story about Ozark catfish bubbled up in short order.  But, for a few minutes, the master storyteller was overridden by a childlike wonder.  A sense of great respect is woven through Michael’s books…for his subjects, for culture, and for the world itself.  It was a treat to see that respect manifest itself in the simple pleasure of a walk in the park.

The book signing at the Plaza branch of the public library was splendid.  The space was on the lower level of the library, which was packed!  Sound was piped through the halls outside of the Truman Forum Auditorium; even when I was buzzing around taking photos and answering questions out of sight, I was never parted with Michael’s presence.  Q&A was rife with thoughtful, intelligent questions and the book signing line was filled with fans both new and old.  One woman told the story of how her late father helped Michael research his first book, Oil Man, a first-edition copy of which she brought to authenticate her story.  It was very touching.

“Do you think it went well?” Michael asked as we shuffled towards the elevator, the last ones out of the event space.  It did indeed go well.  On all fronts, it was an excellent reception in the Paris of the Plains.

2 thoughts on “On the Road with Michael – Kansas City”