Nothing lasts forever.  That fact is why I quickly planned a weekend road trip to the Land of Enchantment.  There is an abandoned motel in Española, NM that has a great old sign I’ve wanted to photograph for a long time.  When I received word that demolition was close at hand, I knew if I waited it would be too late.  In that same spirit (and because I am always excited when I’m on the road) I awoke early on Saturday and left Shamrock before the sun touched the horizon.

I was treated to a beautiful sunrise in my rear-view mirror as I motored west on I-40.  I made a few brief Route 66 detours along the way: in Vega for a photo of the blazing clouds and in Glenrio, the ghost town at Exit 0 that straddles the Texas/New Mexico border. 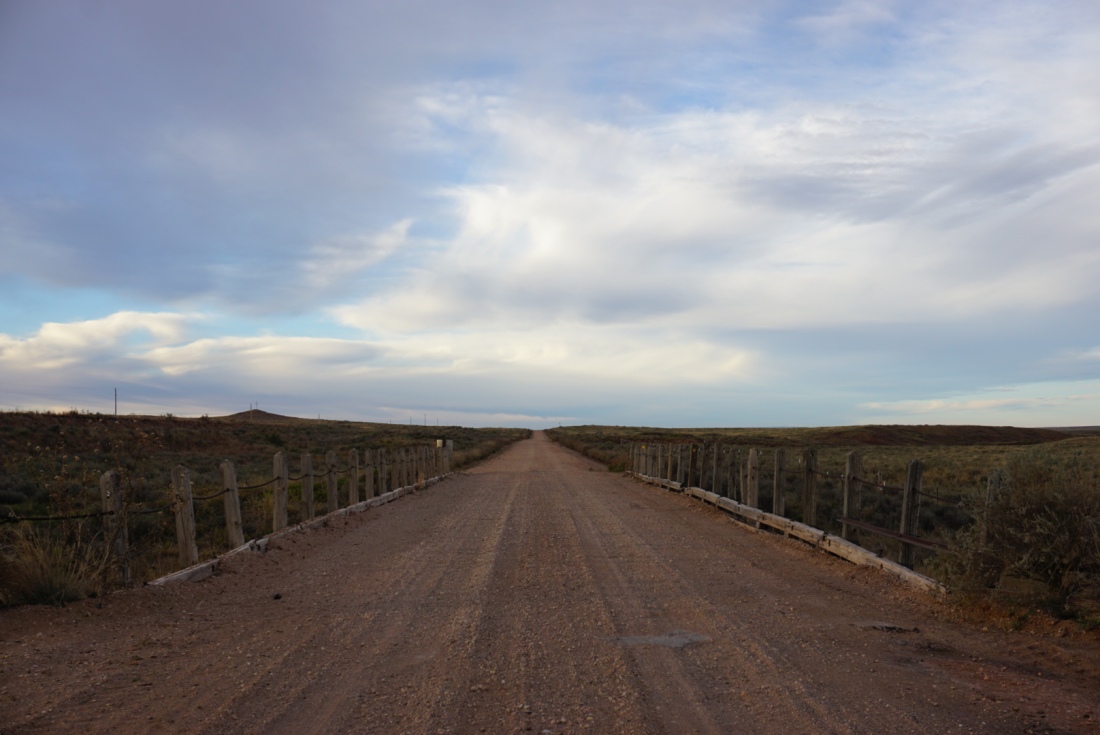 I entered New Mexico on the old gravel alignment of Route 66, a part of the road I’d never taken before.  It seems to have always recently rained before past visits and I didn’t fancy getting stuck in the mud.  It was a dry & peaceful drive through the countryside, where the only remnant of Endee’s incorporation is a crumbling adobe-type structure that proclaims Modern Restrooms.  I’ll let you guess if that is still true.

Once I found true pavement again, I picked up speed. I stopped for breakfast in Tucumcari at Kix’s and checked-in with the folks at the Blue Swallow Motel (who have my 2018 Route 66 Calendar for sale, by the way).  Farther west, at Cline’s Corners, I left the Mother Road-adjacent interstate and headed north towards Santa Fe.

My change of direction brought with it a change in the skies; the beautiful blue that New Mexico is known for became obscured by low clouds, as if the state had imported some of the Oklahoma weather I’d left behind on Friday.  It didn’t dampen my spirits, though; Santa Fe was just as pleasant as I remembered, though my visit was brief.  Española was near. 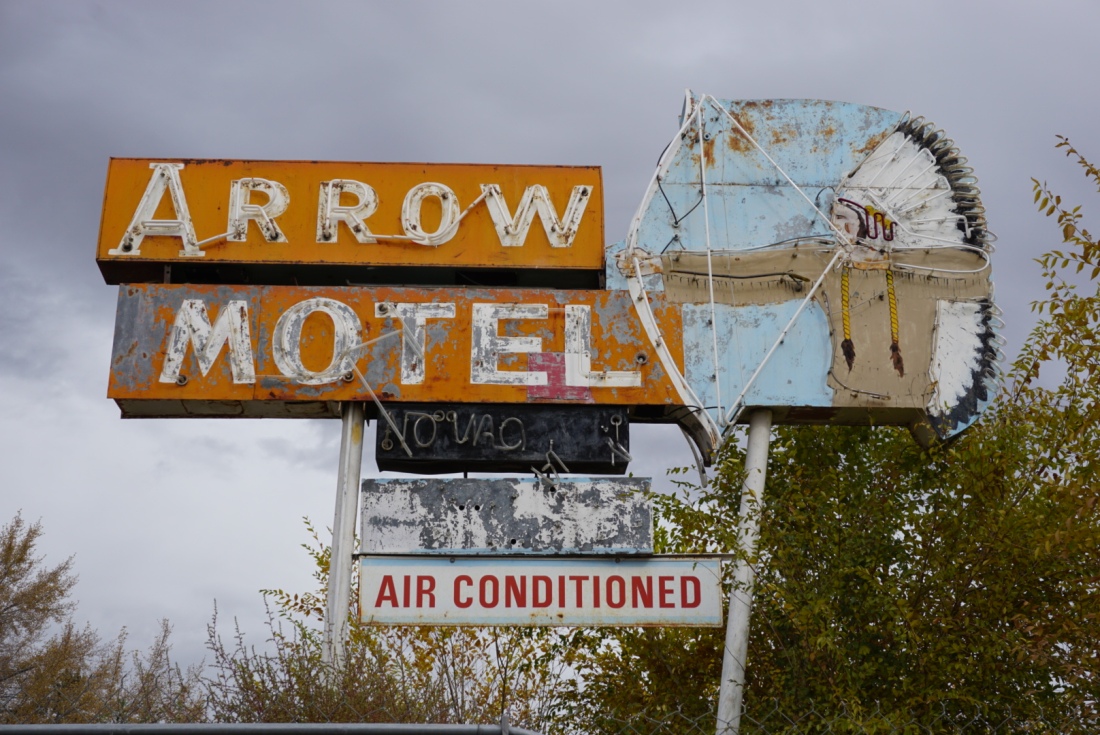 Although I’d called a retail store across the street from the shuttered motel a few days prior to confirm the Arrow Motel was still there, I found myself fearful.  What if the sign was gone?  What if I was too late?  I didn’t allow the doubt to take much of a hold, and as I’d been lead to believe the Arrow Motel still stood…mostly.  The first thing I noticed when the lodge came into view is that an acrid smell of burning hung in the air.  It had been on fire at some point and the blackened building stood ominously next to an overgrown parking lot.  But, right next to the road, the sign stood unburnt.

I happily buzzed around the neon sign and took a lot of pictures.  After only a few minutes, unintelligible yelling began to waft from the husk of the motel.  Rather than come face-to-face with whoever was so upset so suddenly, I hopped into the car and skedaddled.  I was happy with what I’d come all this way to get.  It was a little after lunch time, but I wasn’t yet hungry after my excellent breakfast…so I continued north on Highway 68. 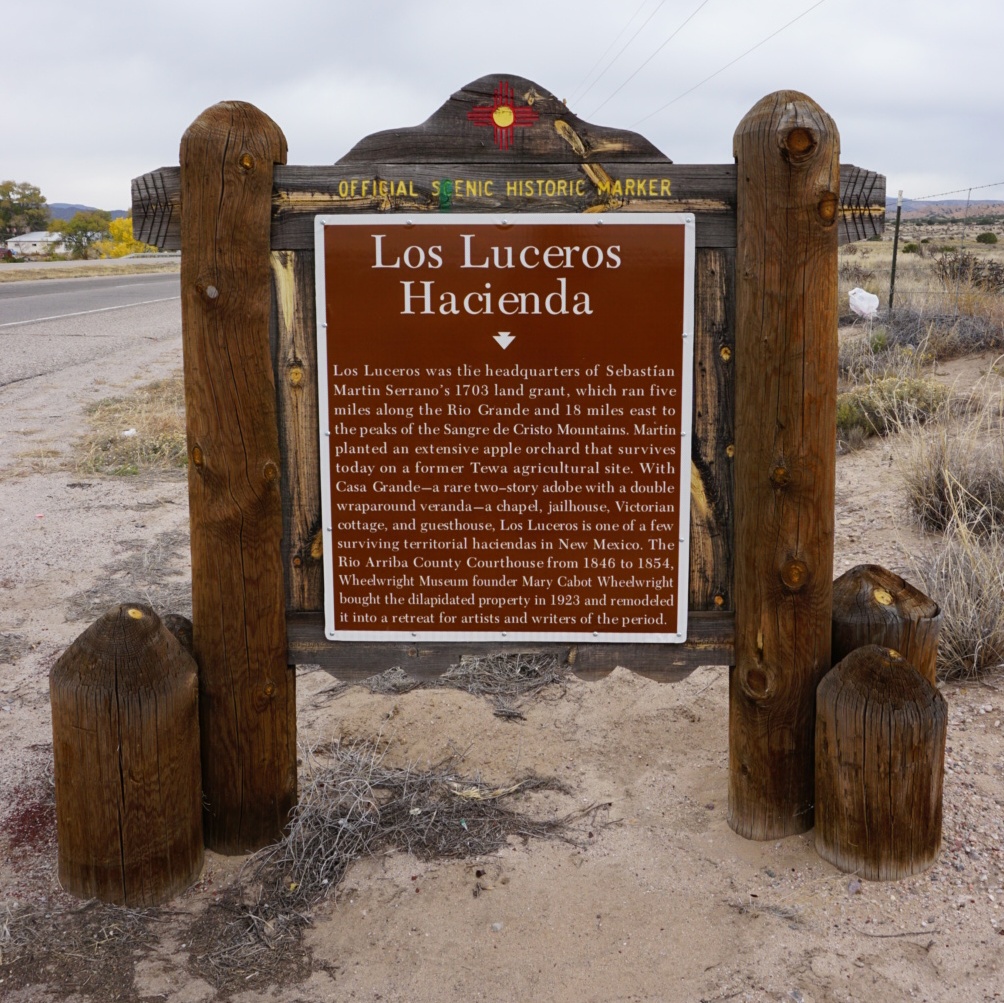 Not far out of town, I saw a Historic Marker for Los Luceros.  I pulled over to take some photos of the signage, as I knew Michael Wallis would soon be releasing a new book detailing the history of the culturally-significant property.  When I’d told him I was heading to New Mexico, he talked about how beautiful the site was but set expectations that it’s not open for normal public viewing.  With that in mind, I continued north after I’d taken my photos.  However, a mile down the road, I turned around.  I was right here.  I might as well go down the side road and see if I could get a photo from the fence line or something.

Much to my surprise, the gate was open.  I looked carefully for any ‘No Trespassing’ signs or anything warning me to stay out, but there was nothing.  I drove onto the property cautiously, weaving down a picturesque gravel road until I came to a modern-looking adobe building.  When I went to look closer, it appeared that some kind of small event was going on.  I quickly returned to my car with the intention of leaving as quietly as I’d arrived.

As I was putting my camera away, a woman approached with two dogs.  I introduced myself and explained that I’d wandered in and didn’t mean any harm.  It turned out that she was a member of the cultural board in charge of preserving the property.  When I told her about my journey from Tulsa, she gave her blessing for me to walk down the gravel road to the river and look around…so I did.  I was amazed; the property is sprawling and consists of many buildings.  The centerpiece is a 5,700 square foot home from the 18th Century, which had started as a four-room building in 1712.  Although I’d missed the beautiful fall colors for the most part, the wooded grounds were beautiful and serene.  When I made it down to the Rio Grande, I just stood there for a time.  Although I took a handful of pictures, none of them did the site any justice.

By the time I actually left Los Luceros, I’d spent a little more than an hour there.  It was a lovely bit of luck; I hope I get to go back someday and really experience it.  My day wasn’t over; it was only 2:00 PM and I was headed to Taos for the night.  I’ll write about the rest of the day’s journey in Part 2.

One thought on “Capturing Time (part one)”