I hope everyone had a wonderful Thanksgiving!  I had one of the best in recent memory, as my Mom and brother came over to our house for the holiday.  Samantha and Mom cooked together, Tyler and I played video games, and we all enjoyed a fabulous meal.  The family even made it to a movie afterwards.  Aside from wishing Dad were still around, I don’t know what would’ve made the day better.  The weekend after was also pretty great, thanks to:  ROAD TRIP! 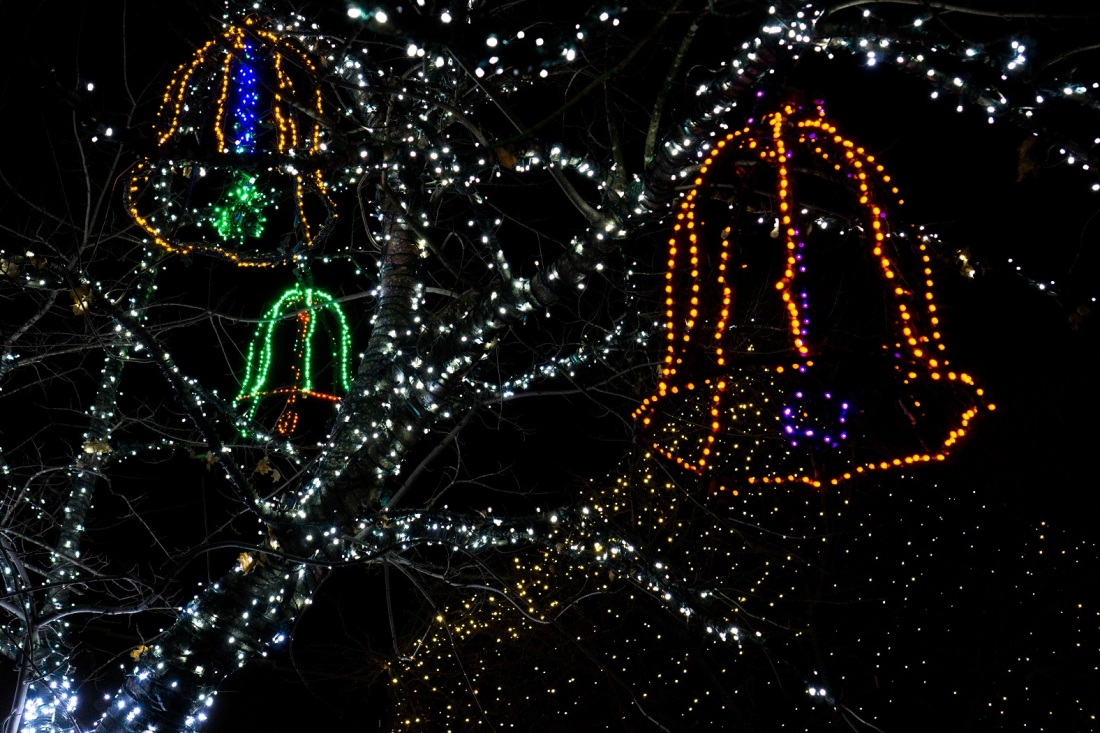 Samantha wanted to attend the Little Craft Show in Fayetteville, Arkansas on Saturday, so we loaded up the car after work on Friday and headed east.  Though I’d been to Fayetteville a handful of times, I’d never really spent much time there.  It was Sam’s first visit.  We stayed at a cozy little bed-and-breakfast a block away from the town square (Stay-Inn-Style) and had a wonderful time.  Our first evening was spent walking the square and admiring the Christmas decorations.  Lights were strung everywhere!  The warmer weather had brought out scores of families to enjoy the holiday festivities:  horse-drawn carriages, pony rides, visiting with Santa, and more.  We had dinner at Hugo’s among a packed house of college football fans from the University of Arkansas and Mizzou.  In fact, another couple staying at the B&B had come down from Columbia, MO and we bonded over the delicious eats at Booches. 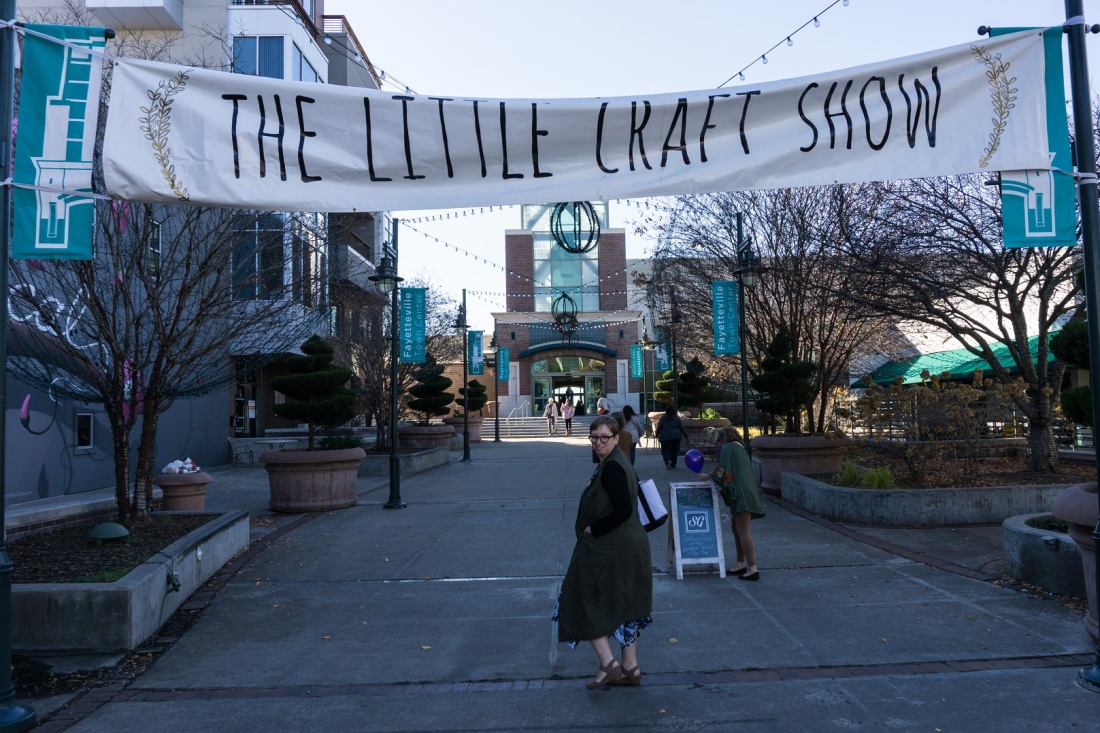 The craft show itself was great!  Arkansas really promotes their handmade craft scene; they even put out a magazine featuring makers from across the state.  The show floor featured jewelry makers, woodworkers, fabric artists, and more.  My favorite artist was a guy that bought old art prints from flea markets and embellished them in various ways, such as adding a robot to a quiet country scene.  You can check out some of his stuff at artistjasonjones.com.  Super nice guy, too! 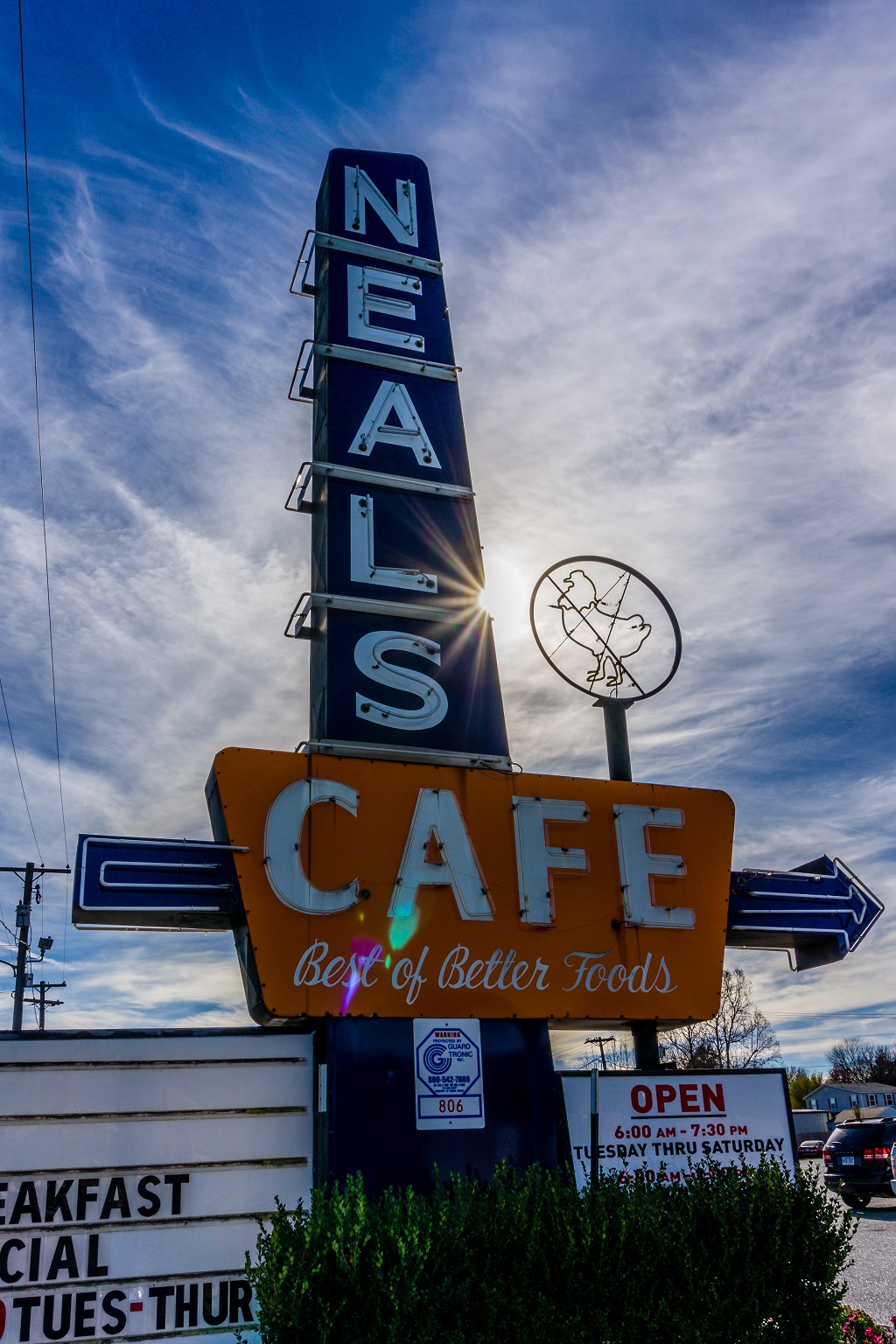 For lunch, we headed north to Springdale for Neal’s Cafe.  We discovered this place last year when we came to town for a craft show where Samantha featured her jewelry.  We try to stop in whenever we’re in the area.  I love the old-school charm of the place, which includes a sandstone fireplace and vintage tabletops.  The racks of rifles that adorn the walls go well with the mounted animal heads, too.  The food is traditional southern cooking; they still fry their chicken in an iron skillet, as they have since opening in 1944. 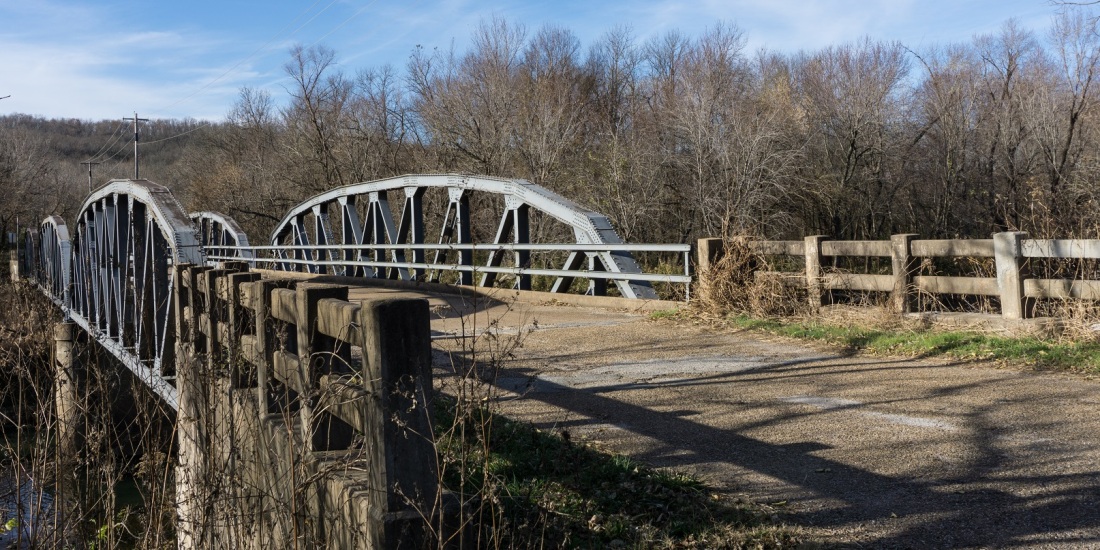 We had a lot of daylight left, so we went for a little drive.  First stop:  Greenland.  No, not that one.  Greenland, Arkansas is home to less than 1,000 people but features an active airport and an old truss bridge, the latter of which I was interested in photographing.  The Baptist Ford Bridge is a three-span pony truss over the West Fork White River.  It was built in 1930 and has been bypassed, but thankfully not demolished.  The grey-arched lane doesn’t get much traffic these days, so I was able to walk the bridge at my leisure. Listening to the water flow by beneath me boosted by already-good spirits.  I’ll bet the area looks wonderful in spring/summer…I’ll have to return. 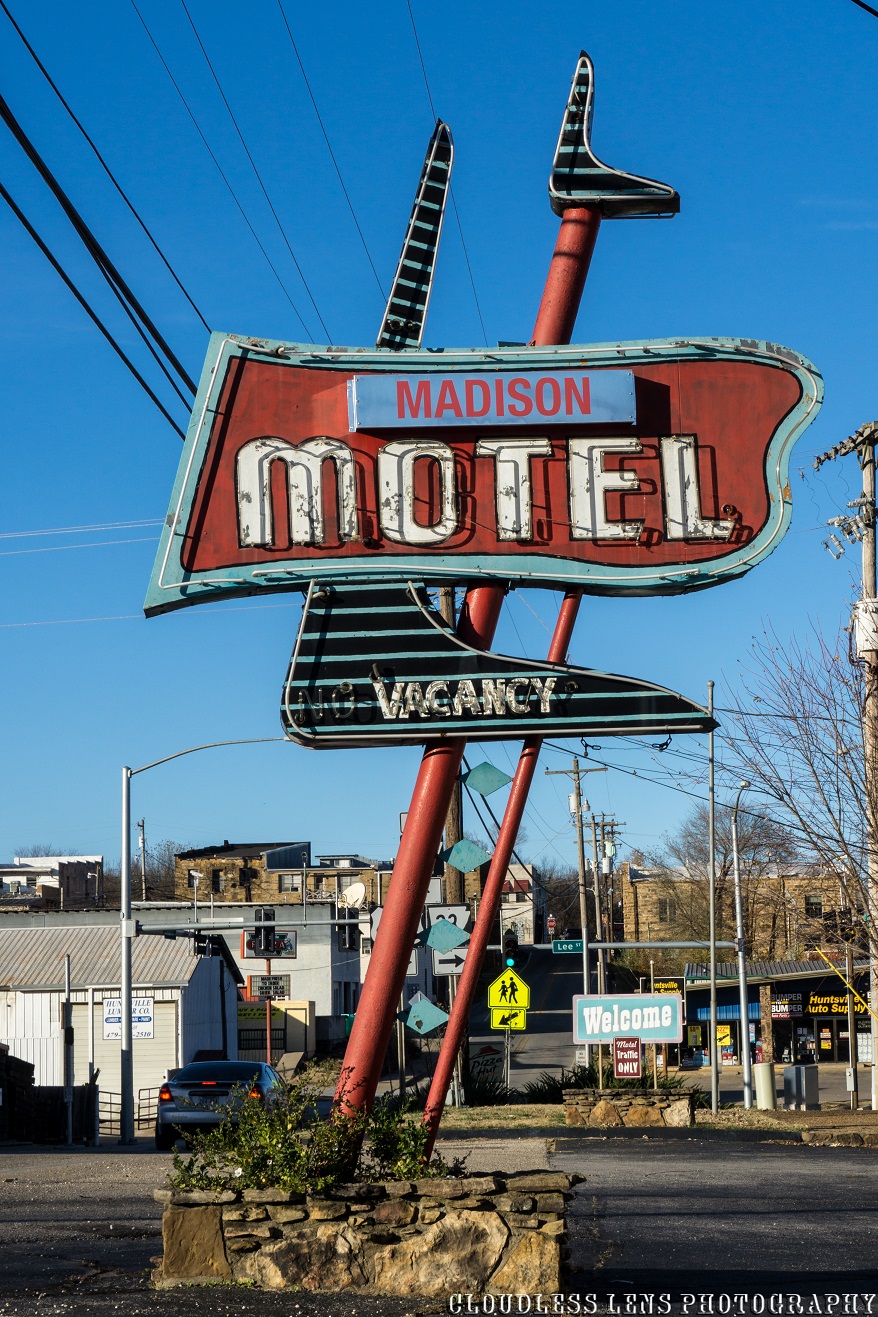 We continued around NW Arkansas, taking scenic Hwy 74 east to Huntsville.  I had a neon sign marked there, but there was also a modest town square that we took some time to explore.  I was surprised to find a historic marker for the Huntsville Massacre, a Civil War event I’d never heard of.  The town that day was pretty quiet; the only sound coming from the occasional pickup truck and a young man belting out gospel music in front of the H&R Block. 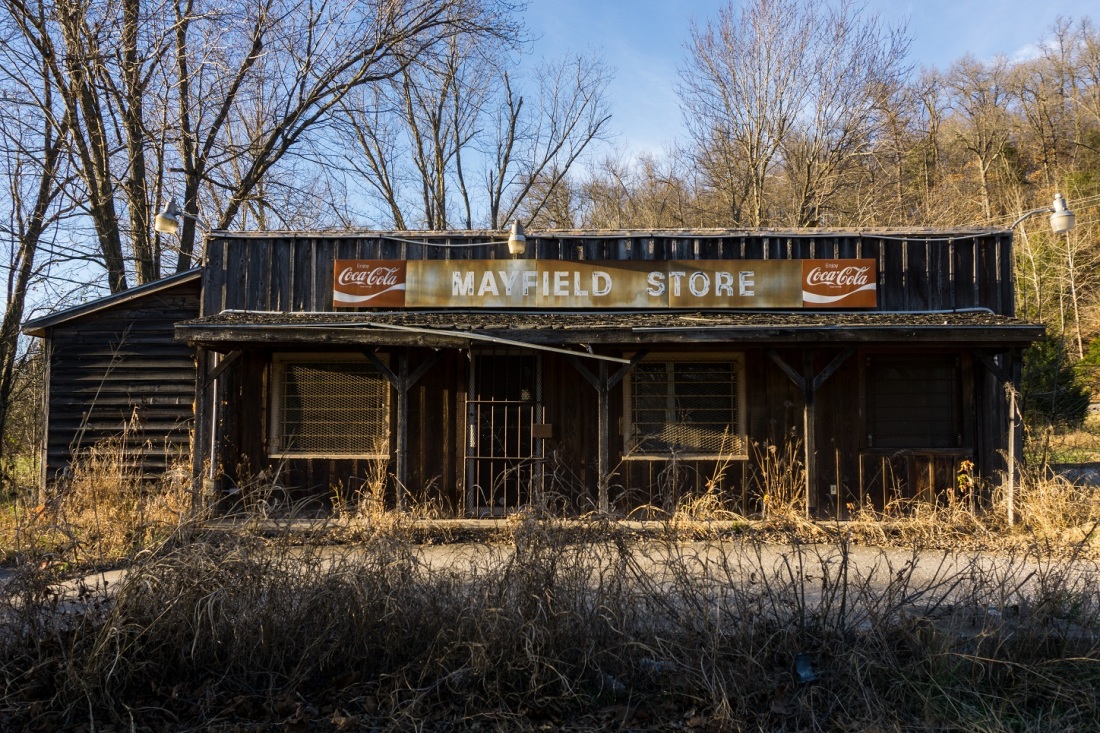 On the way back to Fayetteville, we took a different scenic route and enjoyed the Ozark Mountain countryside.  I even found an old general store to photograph!  Our evening was relaxed:  pizza and reading in bed.  I stayed up late to finish Lincoln in the Bardo, which I purchased on opening day at Magic City Books.  If you’re in Tulsa, check out our newest independent bookstore; it’s fantastic! 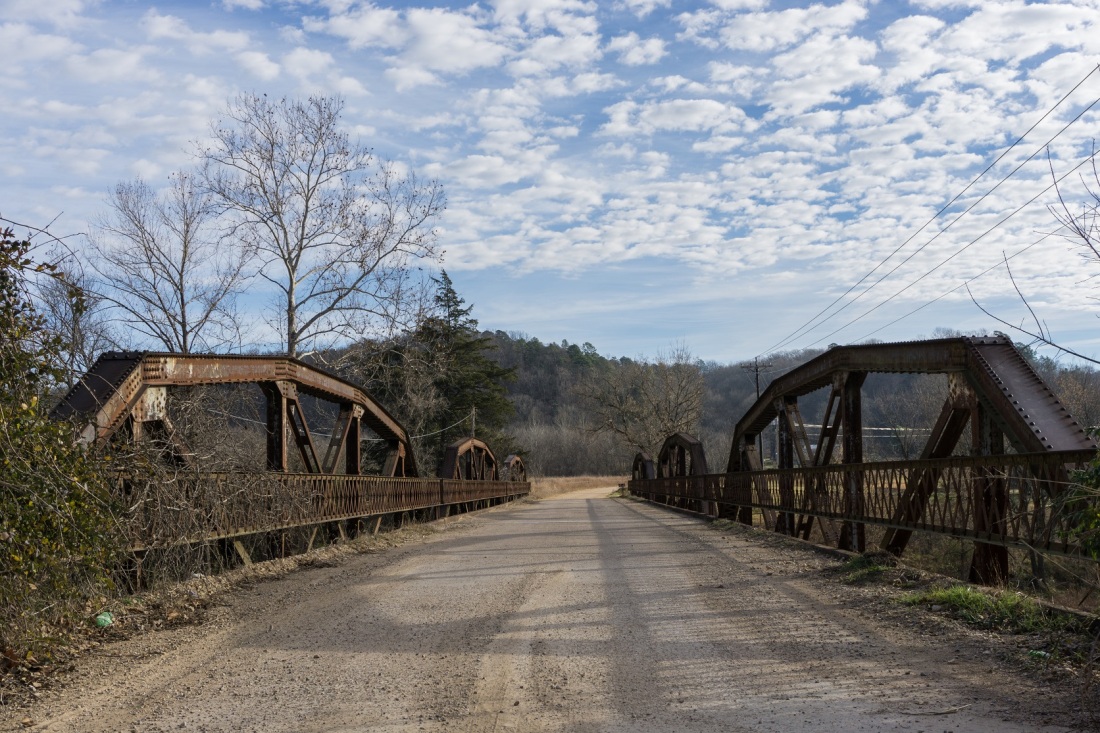 We left early on Sunday to head back to Tulsa.  On the way, though, we made one more stop just west of the Oklahoma border.  Another three-span pony truss was on my list, this one over Flint Creek.  It featured a more traditional brown-and-rust color palette and was tucked down a quiet rural lane.  As I walked the bridge, a pair of dogs approached from the east side, barking up a storm.  Once they felt they had sufficiently conveyed their message, one quietly returned to a nearby farm and the other approached me happily.  I guess once he had fulfilled his duty, he felt we could be friends.  I scratched his head and he trotted around with me for a few minutes; he event went to inspect the car.  He seemed super sad that I was leaving so soon after I had taken my photos.

All-in-all, we had a great trip to Arkansas.  When I plan out solo trips, I tend to run myself ragged trying to see as much as possible from sunrise to sunset.  When Sam’s with me, I slow down…and I enjoy myself much more.  That’s something I’ll need to remember when planning my next trip.  And, since I just heard that the old Highway 11 Bridge near Sperry has come down, I need to prioritize some of the state’s endangered bridges that have been on my list for a while.  Before it’s too late.

When the journey is the destination! #Route66 #Oklahoma #OK66 #bridge
All set up at Carols and Crumpets! Come say hello at the Tulsa Garden Center and get some shopping done. Lots of great handmade gifts here today!
Lights On at the Blue Whale! #Route66 #OK66 #Oklahoma #TravelOK #Christmas #roadsideamerica
Christmas tree on the Route! Sapulpa, to be exact. #Route66 #OK66 #Christmas