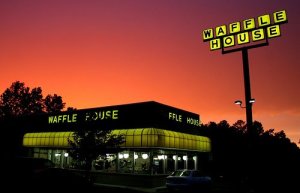 I’ve been trying to think of things I’ll miss aside from the obvious creature comforts. There isn’t a ton of stuff that is uniquely American about our culture; we’ve cobbled so much together from our rich history of immigration. However, I think the traditional American Diner is a unique construct here. And on top of that list is good ol’ Waffle House.

When I think of Waffle House, my first thought goes to the family trip to Florida and Disney World many, many years ago. Those that know me well know I went to Disney half a dozen times over my lifetime but only once did we travel by car. 1988 Ford Aerostar to be exact. Anyway, along the way we stopped at what seemed like every Waffle House on the interstate. Many good memories from that trip. Also, it seems most of the important conversations I had with my wife before we got married took place at Waffle House (the one on 11th, before it was bulldozed and turned around…see the picture on the right). I can close my eyes and see scores of meals with friends and family, sometimes drunk, sometimes when the sun was rising, sometimes for hours.

The AT&T Call Center that I worked at for so many years is conveniently located one highway exit away from a Waffle House. Being the big fan, I ate there often. Now when I walk in, I’m greeted by name. They know my order and have my coffee waiting for me when I sit down. They all know about my impending world travel and I even have one of ’em on my blog update list. (Hi Reva!) 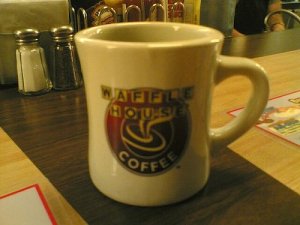 I do not have this experience at any other restaurant. Ever. I truly feel like I’m going home when I go there. It’s always friendly and the food is always good. I’ve recently gravitated to the Steak & Eggs as my norm. Hash browns scattered. Brad likes his capped, but he’s a communist. Indi always gets a waffle and a double order of hash browns COVERED in Tabasco and ketchup. Horrible.

Back on topic: I’m sure I’ll run into awesome mom-n-pop places around the world and experience the atmosphere of a true pub (instead of our traditional Oklahoma bar) and eat foods that I can’t even imagine. But I’ll miss my Waffle House and my good friends there. There’s no place like home.