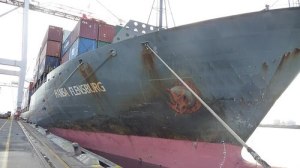 I’m sitting in the internet cafe area of our hostel at the moment. We’re in Rotorua, NZ. It’s a little over an hour from where we berthed. But that’s the end of the story. Let’s start a little earlier.

Once we got off the ship, we said our goodbyes and got a bus to the front of the docking area. This is good for many reasons, primarily for me being that I wouldn’t get run over by the giant daddy-long-legs-esque crate movers or crushed by giant metal boxes. Our bus driver was a very nice fellow and had a lot of advice; he recommended we visit next-door Mt. Maunganui for there was much to do there. He graciously offered to take us beyond the gate and actually to a backpacker hostel in town. We were very happy to take him up on his offer.

We carted a few folks around first; one of which was a former captain of the Hansa Flensburg. He was going to visit the ship and people on there; he also disclosed that he felt all NZ officers were about to be jettisoned in favor for cheaper German and Ukranian officers. That made us sad, because Capt. John and Chief David were some awesome folks. I hope we get to see ’em again.

After another quick stop at the bus driver’s home (he needed a paper from there) we got dropped off in the downtown area of Mt. Maunganui. It is named such after a geological outcropping that is called a ‘Mount’ for aesthetic purposes only, I guess, cause it’s not that big at all. More hillish. Anyway, we walked about six miles on day one. The first thing we did was quite touristy: we wanted Fish n Chips! Also taking one of the bus driver’s recommendations, we ate at a little place across the way that was run by a Vietnamese family. It was delicious.

As a matter of fact, we dealt with all kinds of people yesterday but only one ended up being Kiwi. Tourist town, I suppose. We also broke down and had some pizza. (Side note: There’s a Burger King down the road from our hostel there, but it’s fashioned after a 50’s diner. Weird!) We also went to a grocery store, which was fun for me. I realized there I could not measure ANYTHING, being non-metric minded. Also, the parking area was below the store, as a parking garage. Never seen that before.

We got up this morning after a cold, cold sleep in bunk beds and took a bus to Rotorua. This place was recommended to us by the Chief Engineer of the Hansa Flensburg and we’re enjoying it so far. We took a walk out by the lake and saw Black Swans, which I had no idea existed until today. Cold and rainy, though.

Oh, and we saw Star Trek. It was everything I hoped it would be and more. Everyone should see it, fan or not. It’s a fantastic film in it’s own right.

We spent way too much money. We’re trying to budget better here, as the prices are a little cheaper, but still feels touristy. I’d like some real NZ soon. Of course, this is only day two.

My time’s about to expire on this computer, so I’ll wrap up. More later. Cheers!