Today was a good day. We got up after a wonderful night of uninterrupted sleep (private room in this hostel, and it’s not freezing, and we have blankets!) and had breakfast. Apple + Granola Bar each. We set out this morning on our first walk, probably the easiest one in the country, around the lake here. It took us about three hours and we ventured around the lake, surrounding country, and some of the thermal sulphur pits. I got some good pictures of some wildlife and a few of the nearby steam vents. Even some boiling mud! We felt quite accomplished when we returned to our home away from home, so we had lunch, tried to understand a rugby game on TV, and then went to the Polynesian Spa a few blocks away.

The spa was amazing. We sat for a long while in the hot baths and relaxed our aching muscles. Neither of us are in great shape at this time, and our joints are not used to much travel. I talked to one of the workers there, who when I told him I was from Oklahoma he said, “Ah, the sooner state!” He’s from Indonesia originally and is planning a trip to the US sometime in the future, and has studied up on every state. He even knew what the term ‘Sooner’ meant and what Oklahoma stood for. Good on ya, mate. Oh, also, I saw a gent in one of the bars with a T-Shirt bearing an image of the famous Indian statue (slumped in defeat). When asked, I discovered he picked it up in a second hand shop in Canada. Still, it was odd to see such a familiar sight so far from home. 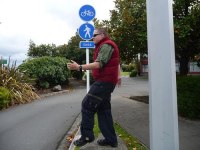 Tomorrow we’re planning a bit of a longer walk. We have also reached out to some folks via the Hospitality Club for lodging, as we’re still spending more money than we have budgeted. Tonight also marks our first attempt at paring down our gear; getting rid of some clothing. Every other backpacker we’ve seen has been living out of normal Jansport backpacks. The only exception is a pair of valley-girl types that had big packs like ours on back AND Jansport packs on front. That was ridiculous.