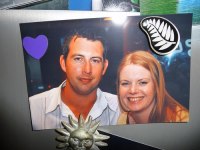 Our first couch surf has been a resounding success. Nick and Kat (our hosts) have been very generous and kind to us. They have a partially-made basement area with a nice big bed (with lots of blankets) and a little bathroom and everything. Not only that, but Nick and I threw down on some Need for Speed and Halo last night on his Xbox. I haven’t played any type of video game in over a month, so that was a nice relaxer.

Yesterday Indi and I ventured south to Wellington. We’re a few suburbs north in a small town called Plimmington, but we’re only a few blocks from the train station. It’s $10 for a day pass, meaning we can get on and off whenever we want that day. So that was how we got to town; it was also the first time that I’ve ridden on a commercial train. It was surprisingly smooth and peaceful at high speeds. Before I knew it, we’d pulled into Wellington Station and were out exploring the capital of New Zealand. 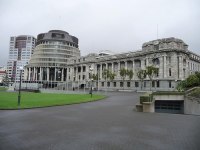 Our first stop was Parliament. Although we didn’t go in for the tour due to timing, I did get some pictures and we saw lots of professional-looking people walking around hurriedly. It was lunch time, so I suppose that’s what the commotion was about. We hadn’t had breakfast (d’oh) so we ate across the street at some little historical looking place called Backbenchers. After that, we went looking for the U.S. Embassy. After many folks who didn’t know where it was, I finally found a guy that did. It was only a few blocks away! We found it shortly.

The U.S. Embassy in Wellington is a small collection of dour, concrete buildings surrounded by tall fences. I also saw what I believed to be tank stops, though who in NZ owns a tank is beyond me. Anyway, we walked up to the door and found it locked. Two guards nearby waved their arms frantically for us to come over there. So we did. Two kiwi’s were behind this impressively shielded guard station with an intercom and a small area where something no bigger than a piece of paper could slide through.

“Can we help you?” said one of the guards.

“Yes, we’d like to visit our Embassy,” I said, showing my passport.

“I’m sorry, you do not have clearance,” he said half-apologetically.

“What do you mean, clearance? I’m an American citizen.”

“No one gets in the embassy without clearance. You have to call this number.”

I was still in an inquisitive state, but Indi was getting really mad. “An embassy is supposed to be representative of its country. A place where citizens can go for help and familiarity. I cannot BELIEVE you won’t let us in.”

“Sorry ma’am, nobody gets in without clearance.”

“What happens if a local citizen wants a Visa?” The guard shook his head. Indi stopped talking and continued fuming.

“Well, can we get the information for the Indonesian Embassy?” I asked. We were going to verify Visa requirements for our next stop. The guard, happy to have something he COULD do, started writing information down.

I gripped Indi on the shoulder. “It’s okay, hun. I’ll just get a picture to show we made it here and we’ll go on about our day.”

“I’m sorry,” said the other, until-now silent guard. “No pictures of the compound either.” 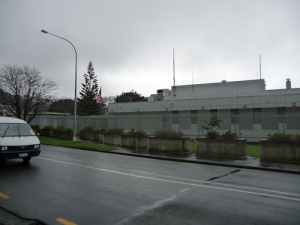 Now I was the one getting upset. “No kidding?” I said as evenly as possible. I took the paper with the Indonesian Embassy information on it, and Indi and I walked off without saying goodbye.

Indi and I spent the next ten minutes being appalled by our Embassy. I did get a picture from around the corner. It’s no wonder people think Americans think they are better than everyone else. We’re represented as a nation of walls. It was very sobering.

After that debacle, we walked to Te Papa, which is New Zealand’s national museum. It was AWESOME! We spent four or five hours there looking at all kinds of stuff. It’s six stories high and well designed. I got a few pictures there, too. Since we spent so much time there, once we were done it was dark out and we caught the train back to Plimmerton.

Now I’m enjoying some morning tea and eagerly awaiting the unfolding of the day.

4 thoughts on “Wellington and the US Embassy”

The old Candy Creek Ranch house near Avant, #Oklahoma. #ipulledoverforthis #forgottenoklahoma #OsageCounty
Service with the speed of sound! This vintage @sonicdrivein sign stands at the location along Historic #Route66 in Chandler, #Oklahoma. I love it! #travelok #sign #MotherRoad #ok66 #OrderMatic
Ol' Blue looks cold now, but the forecast is colder and snowier. Hang in there buddy! #Route66 #ok66 #MotherRoad #travelok #Catoosa
The old Carpenter's Bluff Bridge over the Red River was finally bypassed in 2017 after over a century of service. It originally carried the Railroad between Oklahoma and Texas, with a wagon shelf on the side (which is still there!). #Oklahoma #igersok #travelok #Texas #roadtrip #bridges_of_our_world #bridge #blackandwhite