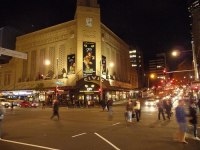 It’s another cold and rainy day here in the Big City. I’ve decided that I’m not as big a fan of Auckland as I was of the smaller towns. It’s much easier to navigate around the smaller towns and it’s a LOT less expensive. We’ve spent so much money here it’s not even funny. Also, the hostel we’re at is a bigger one and folks haven’t been as friendly. It’s like high school with all of the cliques and such.

We went today and got our last round of the Hepatitis A/B vaccination. The doctor there also kindly informed us that the malaria medication we were prescribed back home was for Central America, not Southeast Asia. Whee. So, we had to get some new malaria medication too. Better safe than sorry, even though I didn’t like dropping the coin on it. Cheapskate me.

Last night we got our dinner at the White Lady. It’s a trailer that has been open every night (save one due to a power outage in 2006) since 1948. It’s a cultural icon. Of course I got a burger, but I felt it would be wrong for me to ask for it plain, like I normally do. So, I got a regular non-modified burger and took it back to the hostel to eat. Lettuce, tomato, fried onions, tomato sauce (essentially ketchup), cheese, meat, and toasted bun. It was a first.

So that was an accomplishment I wanted to tell everyone about. With today being so rotten out, I don’t think we have much planned. For the rest of the week, we plan on going to a comedy show, the local Aquarium (penguins!), the transportation museum, and perhaps a Hare Krishna dinner this weekend. Our flight to Indonesia is next Wednesday at 6:30 AM local time. It’s hard to believe that our time in NZ is almost over.

4 thoughts on “Cold and Rainy”

After a week in New Jersey it sure was nice for my neighborhood @Reasors to bring out the welcome wagon when I returned home to Tulsa. #OscarMayerFest
When Mom came to Sea Isle in 2018, she and Sam came across a little secret garden. We couldn't find it all week but today, our last day, Sam and I found it. Mom loved anything green and growing but hydrangeas were among her favorites. It's like she is saying hello.
The Cape May Lighthouse rises 157 feet at the southern tip of New Jersey. This is actually the third one built (1859) as the first two locations were lost to erosion. #lighthouse #NewJersey
⛱️