Remember when I said Auckland was busy?

Surabaya is the hectic pace and energy of Kuta on steroids. Everyone is going everywhere at the same time. It’s also the dirtiest city I’ve ever been to. It makes for quite a picture. Once I had a small nap (couldn’t sleep long) one of my hosts, Bujang, took me on a drive around town. He had some errands to run, which was fine by me as I’m often more fascinated with everyday places than the touristy ones. I got to see first-hand how auto dealerships (Suzuki, in this case) treats their customers the same everywhere. Long waits, costs for things that shouldn’t cost, and ridiculous problems for a brand-new car. We did get a free snack, though. 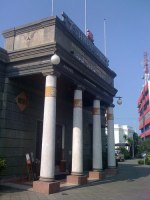 After that we took a trip to see a local tobacco museum. The company that is represented, Sampoerna, is the largest and most popular cigarette manufacturer in Indonesia. Not only do they have some cool pictures, props, and history tidbits throughout the museum, but the second level is an actual production floor. I stood for what seemed like forever watching row after row of Indonesian ladies working on a variety of tasks. Some rolled tobacco. Others cut paper. Yet more trimmed rolled smokes. And even more packed them into boxes. What amazed me most was how crazy FAST they were. If I hadn’t seen it in person, I would swear that someone sped up the tape. It was unbelievable.

The rest of the day was spent driving around and seeing some other parts of the city. Nothing major to report until the evening, when a group of fellow Couchsurfers gathered for a going-away party/celebration of the US Independance Day, as there was another American present. His name is Rob and he is hilarious. Bujang was kind enough to buy a roman candle and we fired it off just before dinner, which was a mixed selection of Indonesian and grilled foods. It was good times.

The next morning, Indi arrived via taxi safe-and-sound. It was such a relief to see her. She was even happier to see me, as you’d know reading her previous post. All was well, and we spent the day sightseeing. We saw the largest mosque in Southeast Asia, called Nasionale Mosque al-Akbar I believe. It was amazing. We also drove to the other side of town to see a small Chinese-style mosque and talked to some fantastic locals. In the evening, we met up again with Rob and Claire (FRA) and spent sunset at a large outdoor park. Sleep was very welcome.

Today we drove for several hours to a secluded mountainous area where Lupi and Bujang went paragliding. It was amazing! Neither Indi or I had the guts to do it ourselves (yet) and I got some fantastic photos.

Tonight is karaoke! I’m low on battery so this is a bit abbreviated, but once we’re able to post more and get some photos online we’ll see you again.