Tioman was beautiful, it was everything that Rhys said it was, but I wanted to relate one specific incident that caught me hard. Nikki, I would recommend having tissues.

There are thousands of semi-feral cats all over Malaysia, and Tioman was no exception. Some are looked after, a few are true “pets,” but most beg on sidewalks and catch as catch can. I’m a sucker for a sweet furry face, so I quickly became known to most of the cats hanging around the restaurants as someone who, if miaowed to, would feed them. If I had extra chicken scraps (and I usually did), I’d cluck at nearby felines busy patronizing other tables, and they would all scurry over for food.

The second afternoon we were at Salang, I was walking slowly back to the cabin, feeling somewhat sapped from my morning excursion into the ocean and the over-strong sun. A small black pile of fur caught my eye, huddled tightly against the tiled pathway in the shadow of the curb; no one else seemed to notice him. I sat nearby as Rhys shot me a “not again” look and put my hand a fair distance from his face; he sniffed forward, and I noticed his eyes were crusted over and he could not have been but a few weeks old. He was a black tabby with faint tan lines, and did not have the strength to move entirely toward my hand; the exertion of trying sent wracking coughs down his slight frame. This was one sick kitty. It’s not an unusual sight, and I know humans come first, but it breaks my heart. There is little more pitiable in the world than a coughing kitten, especially one so tiny. 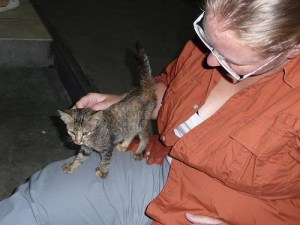 “Where is your mother?” I asked him, as I pet him gently, with the pad of one thumb stroking with the fur. The kitten didn’t answer, but the coughs subsided, and he started purring. His eyes tried to open but couldn’t through the crusties; he didn’t try again, but sat there curled up and shivering, but purring. It was nearing dinnertime, and we had reserved a roasted chicken at the restaurant down the block. I promised to the kitten that I would bring him back some just as soon as I was done. I continued to pet him for about fifteen minutes, and then had to make myself walk away; because he couldn’t see, he mewled for me for a few minutes, wondering where I’d gone. Then he huddled back up to the curb, coughed, and resumed shivering.

Dinner came and went, and was delicious. It was only an hour or two later that I walked quickly back down the path to Salang Indah, the resort where we were staying and where this kitten had made his tiny little tiled home. I looked for him in the same spot – he wasn’t there. My hands were clasped around a napkin containing enough chicken meat for three fully grown cats, and I searched the area with my eyes, clucking softly. Ali and Rhys were near me, and they saw the kitten just a moment after I did.

Left for dead, he had been unceremoniously tossed near the trashcan, almost invisible in the black shadows. He was on his side, and his head was tipped back, his mouth slightly open. One of my hands left the chicken and covered my mouth as tears welled in my eyes – I was too late. I let out an involuntary “Oh no,” and kneeled next to him and the wastebin. I fished a small piece of chicken out and placed it by his mouth, hoping he would stir – he didn’t. I pet his side and swatted away the gathering flies; I let out a small yelp as he drew in a large shuddering breath but didn’t move. He was still alive, but barely, and all the chicken in the world wouldn’t help him. I could do nothing for him. Rhys put a hand on my shoulder; Ali looked confused. I had to go sit on a bench for a while and stare at the sea. The friendly, sick little kitten had no name, had no one who loved him, even his mother was nowhere to be found. The only person who would mourn his passing was me.

Ali told Rhys he was surprised at how “sensitive” I was, and Rhys explained that I have a soft spot for animals. It’s true, and I do get attached. I don’t think that’s a bad thing at all, even if it is rough for me sometimes when things don’t work out. (Several other cats really appreciated the chicken, by the way.) I would help a child I saw in dire need; I have to also do what I can for an animal. They’re not that different, in my mind; one major difference is that a sick or starving animal (especially a baby animal) can’t ask for help; it can only sit and shiver. Mahatma Gandhi once said: “The greatness of a nation and its moral progress can be judged by the way its animals are treated.” So, if you have a furry companion at home, please give it a hug and a pet, and a special treat, in memory of the kitten I couldn’t help.

In Mersing, we have found a tiny kitten, so far healthy – we have fed it bits of things every day so far. Life goes on.

One thought on “In Memoriam of Friendly Fur”