I have seen brochure pictures of crystal-clear waters and beautiful sandy beaches surrounded by palm trees all my life. I didn’t think they really existed. I found out differently last week. 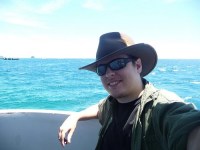 Last Tuesday we took the ferry from Mersing, Malaysia (quite a small town, actually) to Tioman Island. It’s a duty-free island of a dozen beaches or so, each with their own resort/getaway communities. The two hour ride over was largely uneventful, save for the traditional kicking-of-seat by young folk behind me. Once we arrived to the first beach, I went to the back of the boat so I could take some pictures from the small smoking deck. There were six or seven stops on the western side of the island.

Our stop was the last one, so I had much time for observation and capture. What I saw astounded me. I could see meters below the surface of the water. There were fish, crabs, coral, you name it. Not only that, but each beach our ferry stopped at had a small grouping of buildings (mostly inns and restaurants) that did not detract from the overall vibe. Once we finally reached our stop, the three of us (Indi, Ali, and myself) wandered about the area briefly before settling in. The hotel we stayed at was spread far and wide; they have hundreds of rooms, but none of them are centralized. They are all small individual chalets with their own porches and views of the sea. 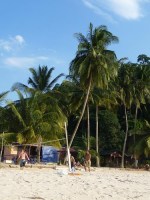 We went for a swim as soon as we could. It was the first time that I’d actually swam in the ocean for any period of time. Not only that, but I walked on the sand underwater and could see all the way down as far as I walked out, which was about shoulder-height of water. The next day we rented some snorkeling gear and swam to a small, secluded bay. I saw all manner of coral (even some brain coral!) fish and other sea life. Once we got to the little beach far from everyone, we took a much deserved rest. Unbeknownst to us at the time, this little beach was about a mile away from where we started. Not only that, but we’d gotten cut up by some evil barnacles, so we tended to those injuries. After burying my feet in the sand, we swam back. I was supremely exhausted. During one of my many floating rests (life vest for the win) I wondered if I would get carried out into a boating lane. Everyone else seemed to be swimming along just fine and I felt like dead weight. I wasn’t THAT out of shape still, was I? Not only that, but my stomach was supremely upset from the small bits of salt water it was experiencing. I hadn’t swallowed any, but just the presence on my lips made my stomach churn. I got to the beach (finally) in third place and sat in the water near the shore, contemplating.

The other days on the island were a mix of good food, chess, intellectual conversations, and cards. It was very relaxing. Aside from the mosquitos. Indi got quite eaten up. We’ve tried to count them all but lose count at about 30. On one appendage. She is a buffet for the little buggers.

We’re back in Mersing now. We bus to Kuantan tomorrow to take a look at another close-to-shore Malaysian city. It’s the capital of the Malaysian state of Pahang, so it’s got that going for it. After that, we start heading inward to visit the oldest and most pristine rainforest in the world: Taman Negara.

Also: I finally got a chance to properly weigh myself. I started our trip at 198 (heaviest I’ve ever been). After three months, I’m down to 165. Woot! Also, I’m working on a post talking about my new friend, Ali. He’s from Tehran and is studying abroad. He is the first person I’ve met from Iran. We have had some interesting conversations and I promise I will share some of them with you.