I am writing from our semi-final destination in our first go-round of Thailand; the beach community of Ao Nang in the Krabi province.

We wrapped up our time on Ko Phi Phi yesterday. Our lodging was horrid the entire time and we were extremely happy to move on. Our final night was spent at the Banana Sombrero Mexican Restaurant and Bar, owned by an ex-pat American. I sat at the bar with him and his friends and talked of travel and culture, including a nice long conversation with a ex-pat from Copenhagen that extolled the wonders of visiting Myanmar. Given the U.S.’s recent overtures to the country, this is looking more and more likely as our stop after Cambodia and the north of Thailand. Anyway, the night was a good cap on our stay. Can’t say that I’ll ever go back, though. 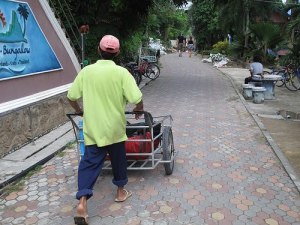 We took the morning ferry to Krabi, back on the mainland. The long walk to the dock reminded me of how poor our guesthouse selection had been. That ridiculously steep hill, the trash incineration plant, and the upsettingly unhelpful staff. We convinced the manager to help us to the pier with our bags due to my injury but that’s about the only positive that comes to mind. Leaving the island under a cover of dim cloud seemed appropriate. An hour and a half of slight seasickness later, we arrived at port and were bussed to our next guesthouse, which is a lovely little set of bungalows with a nice garden a short walk from the beach and a peaceful beachside town. We went for a little walk (my poor foot is still tender, so it wasn’t a terribly long walk) and had the first night of good sleep we’ve had in a week.

We’re here for five days, then head back to Bangkok for a night to catch the bus to Cambodia. We’re there for a few weeks, then fly BACK into Bangkok (discount tickets were only $25/person!) and decide which way to go from there. Right now we’re thinking the north of Thailand for a few weeks (allowing Indi to go to the monastery retreat as well), followed by Myanmar, then off to China and Japan!