Greetings from Prague in the Czech Republic!  Some folks consider this ‘Eastern Europe’ but truthfully it’s more of a central European nation.  This past November, the country celebrated 20 years of post-communism.  It has a different feeling to it than anywhere else in Europe we’ve been, that is for sure and for certain.  For one, we’re not using Euros…that conversion happens next year.  The currency here is ‘Crowns’. 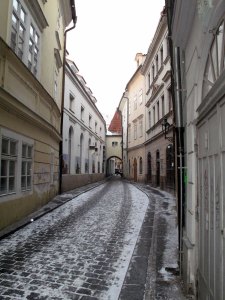 We landed at the airport, got a local SIM card, and taxi’d to our destination with no problems.  More folks seem to speak English here than what we ran into in both Italy and France.  It also helps that the little tourist map the airline gave us has the restaurant we’d agreed to meet our landlord at, so we just pointed to the little icon and he understood.  The drive in was very nice, as Prague had a light snow going on at the time; in fact, it’s had a light snow ever since we got here.  Jarda (our landlord) mentioned later that he can’t remember the snow ever lasting this long in Prague.  It’s not deep or anything like what DC is dealing with right now, but it’s oddly relaxing.

We met with Jarda at a little restaurant/pub below our flat.  Not only did we have some traditional Czech food (Indi with goulash-type soup in a bread bowl, I with some venison sausage and amazing mustard) but we tried Kofola.  Kofola is a cola alternative to Coca-Cola set up behind the curtain as a communist counter.  After the fall of communism, many thought Kofola would follow, but a smart businessman bought the brand and marketed as a ‘good ol days’ cola, and it strangely worked.  It tastes NOTHING like Coke, it’s more like sarsaparilla.  I enjoyed it, though Indi did not.  Did I mention that beer is cheaper than water everywhere we’ve been?  But I digress.

We got our keys, took the lift, and settled into our new home for the next month.  We have our bedroom with an attached shower, a communal kitchen, dining room (more like a breakfast nook), and living room.  We are sharing with a young French university student named Guillaume and an English-teaching couple (Jemma, UK and Mike, USA).  They are an easygoing bunch and things are going quite well.  Though the temperature hovers around 20F for the high and single-digits for the low, we stay quite toasty here.  That all changes once we pass through the door downstairs.  It’s bloody COLD.  Our first priority was to head to Tesco and get us some leggings to go beneath our current clothes, some gloves, and a scarf or two to keep Pappa Blizzard out.

I’ve done a little sight-seeing, and what I’ve seen has been amazing.  The architecture here has quite the gothic flare and many places still feel like the ancient European city.  Most streets are cobble-stone (which helps them not ice up, too) and most passages are narrow.  Modern mega-malls are situated just down the street from ancient gates and castles, and everything seems to get along.  They have a subway AND a street car system.  Old Town Square is the host of the Tyn Cathedral and a famous Astronomical Clock.  I was fortunate enough to make it there on noon the other day and, not only does the clock chime, but wooden figures move about.  There’s a little skeleton ringing a bell, and the Apostles walk by windows above the main dial.  After the chimes are done, a man at the very top of the tower trumpets the changing of the hour for all to hear.  And see, if your vision is good enough.

Christmas is a big holiday here, and there are big trees in just about every square.  There are little shops and stands set up, regardless of the cold and snowy conditions, selling food and wares.  And for me, personally, since the Czech Republic is mostly a meat-and-potatoes society, the smells coming from the tents and shops are truly intoxicating.  I’ll have to be careful not to rediscover my lost weight here.  Not far from Old Town Square is the Charles Bridge, lined with famous statues and capped by tall Gothic gates.  Though I have not ventured on the other side of the river much yet, Prague Castle is there among other interesting churches and other such architectural wonders.

All in all, it’s been mostly quiet since we arrived, as we recover from the crazy pace we had in Italy and France.  Mike and Jemma have invited us to a Christmas Party with ex-pat friends of theirs, and we are happy that we won’t be spending Christmas alone.  To our families, we miss you.  Personally, this will be the first Christmas I’ll ever have spent away from my family, and I don’t like it much.  But, the experience I’ve had and continue to have are definitely worth the time and money.

One thought on “Czeching In”