Posted on January 7, 2010 by rhysfunk
12/1 Jowl, Jyunkei – Served at our favorite meat-on-sticks place in Osaka, Jowl was a tough and well-seasoned beef-type meat that I enjoyed thoroughly.

12/3 Margherite Pizza – Margherita Pizza is like a cheese pizza, but in Italy, it’s totally different.  It’s the best pizza I’ve ever eaten.  Who’d have thought I enjoyed basil so much?
12/4 Cornetto a la crema, Spinach and Ricotti Ravioli, Italian beer – Italian beer is great, full bodied.  I forget the brand I had.  Crème-filled croissants (the Cornetto) are a new favorite, and the ravioli was a surprising success.  I’ll have to try more spinach dishes.
12/5 Spinach Alfredo Shells and Sausage Penne Pomadora – Once again, spinach was a success.  As long as it’s not slimy out of a can, I seem to enjoy it.  The sausage dish was lighter than expected, and the native Italian olive oil really added a lot.
12/7 Prosciutto Pizza, Lasagna – A nice salami-type pizza, not as spicy as pepperoni but more flavorful.  Italian lasagna has more cheese than sauce, very little meat…I think I prefer Indi’s homemade lasagna.
12/9 Taralli, Burrotado, Gorgonzola & Romano Rotelli – OMG Taralli.  They are these spicy little bread circles made by grandmothers in the south of Italy.  I LOVE THEM.  The Rotelli was amazing as well…the pure local ingredients really add an intangible to familiar dishes.
12/10 Gorgonzola Gnocchi, Tiramisu – Gnocchi is another instant hit.  I look for it everywhere I go now.  And fresh Tiramisu?  Better than chocolate cake.  Seriously.  Favorite dessert ever.  I’m dancing in my seat just thinking about it.
12/11 Nutella, Apricot Juice, Tramezzini (ham and mozza), Spritz, Couscous w/ chick peas zucchini yellow peppers and tomato sauce, wild boar salami, Spicy Italian pork salami – No, I’d never had Nutella before.  It was good, yes, but I still prefer my peanut butter.  Tramezzini is a little white-bread sandwich wrap that is all over Italy; good, if a bit basic.  Spritz is a local Triaminic-flavored alcoholic beverage that I enjoyed moderately.  Not a big fan of the couscous, but I gave it the ol’ college try.  The Wild Boar and Spicy Pork salamis, however…man.  Another “how have I lived without this?” food.   Interesting fact:  the wild boar sausage was made on a family farm, and very fresh.
12/11 Sardinian Bread, Doner Kebab– The Kebab was good, if nothing else than a variation on a meat-and-bread theme.  The pita bread was nice though.  Sardinian Bread is delicious! 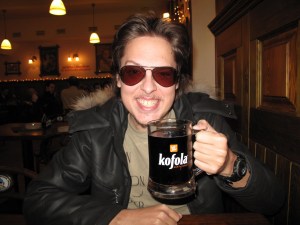 12/16 Venison Sausage, Czech Goulash, Kofola Cola – Our entry into the Czech Republic was met with a great meal, including Kofola Cola.  A cola devised during communist times to combat the forbidden Coca-Cola, it tastes a bit like sarsaparilla.  Love it.  The ‘goulash’ is more of a beef broth and great on a cold day.  Venison sausage is surprisingly tasty.
12/17 Polican Salami, Czech Hot Mustard – Pretty self explanatory, a little spicy and a great snack.  I’m going to have to invest in this stuff back home.
12/20 Potato Croquettes – Little deep fried mashed potato spheres.  A gift from God.
12/22 Charles Platter – Special Mention to a platter at this restaurant we frequent here:  two types of sausage, two types of ham, and a giant pork rib.  It’ll cure what ails ya.
12/26 Svickova, Bread Dumplings – Traditional beef cutlet in a crème sauce, topped with a small cranberry garnish.  I wasn’t too fond of the sauce at first but the dumplings were remarkable and balanced the meal well.
12/28 Saffron Rice, Bacon Dumpling – The rice was good, but unremarkable.  I prefer plain white rice with a little soy sauce.  Bacon Dumplings rule.
12/30 Trdlo – A Christmastime delicacy bought at street stalls here in Prague.   It’s a strip of yeast dough wrapped around a hot metal cylinder, baked, and rolled in ground almonds and sugar.  Yes, it was good.  Yes, I wish I had gotten more of them.

Rhys Martin was born in Tulsa, Oklahoma in 1981. In 2009, he sold everything he owned and left the country, living out of a backpack for ten months. He discovered a passion for photography while traveling throughout Southeast Asia and Europe. After returning home, he looked at his home town and Oklahoma heritage with fresh eyes. When he began to explore his home state, Rhys turned his attention to historic Route 66. As he became familiar with the iconic highway, he began to truly appreciate Oklahoma’s place along the Mother Road. He has traveled all 2,400 miles of Route 66, from Chicago to Los Angeles. He has also driven many miles on rural Oklahoma highways to explore the fading Main Streets of our small towns. Rhys has a desire to find and share the unique qualities of the Sooner State with the rest of the world. Cloudless Lens Photography has been featured in several publications including This Land, Route 66 Magazine, Nimrod Journal, Inbound Asia Magazine, The Oklahoman, and the Tulsa World. In 2018 he published his first book, Lost Restaurants of Tulsa. Rhys loves to connect with people and share his experiences; ask him about enjoyable day trips from Tulsa, locations along Route 66, and good diners or burger joints along the way.
View all posts by rhysfunk →
This entry was posted in France, Italy, Japan, Old Travelogue, Prague. Bookmark the permalink.