Touching down at Heathrow was an instant change in atmosphere; whether it was just a perception change on MY part or an actual difference is unknown.  It was refreshing to understand all of the aircraft announcements and read all the signs as we entered the airport.  Once our bags were collected, we met up with Matthew (an old friend of Indi’s from her Kansai Gaidai days) and took the bus into Uxbridge, where his flat is located on the edge of London.
Uxbridge is a quaint little suburb that is still on the edge of the tube (subway) line and has railway access to anywhere we want to go.  We took advantage of that fact on Sunday by taking the train to the city proper and checking out some of the major tourist areas first.  Our first stop was an unexpected surprise; Paddington Station.  “What’s so special about a train station?” you may ask.  Well, normally, not much…but this is Paddington.  You know, where Paddington BEAR arrived from Darkest Peru with a note asking, ‘Please look after this bear.  Thank you.’ with a keen love of marmalade sandwiches and cocoa.  And, yes, there is a statue in the station of him.  I had my picture taken with him and was gleeful. 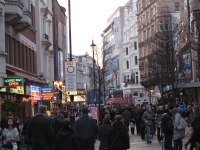 Exiting Paddington was like walking into an English stereotype.  I was immediately greeted with a grey sky and a chill breeze.  Red double-decker buses and black London taxis sped by on the street.  The pavement was packed with people.  During our walk from Paddington to Piccadilly Circus I had to fight my internal alarms that were screaming of discomfort and demanding seclusion from the throngs of humanity.  Instead of having an anxiety attack, I decided to focus on my camera and make sure I didn’t lose Indi and Matt in the crowd.  We took a break at Piccadilly Circus and admired the miniature Times Square-ness of the area.
After another bit of a walk we found ourselves in Chinatown, where I immediately set out to find Lee Ho Fook’s, the restaurant featured in Warren Zevon’s 1978 song ‘Werewolves of London’.  Much to my dismay, it appears to have shut down last year.  I had a sad face.  I perked up quickly, though, as we arrived at the National Gallery and the sun broke through the clouds.  Trafalgar Square was quite beautiful, with a great fountain and Nelson’s Column.  Though we were getting tired and worn from the walk, our next destination energized me tremendously.

The most famous clock in the world.  I’ve been looking forward to Big Ben for some time, and when I rounded the corner and saw its full glory I was not disappointed.  The giant timepiece was surrounded by the surprisingly Gothic-looking Houses of Parliament and right on the Thames River.  The sunset was gorgeous thanks to the partially broken clouds; I couldn’t have asked for a better situation.  Once Matt and Indi tore me away from my camera we walked down the Thames, under the London Eye Ferris Wheel, and then took the underground back home.
It was a fantastic day and a great introduction to England.  Tomorrow we get to see Carol and John, old family friends from ‘round Camden and just happen to be visiting.  Sweet as!