If I look just to my right, I can see out my bedroom window and the growing blanket of snow on the ground, fence, and surrounding rooftops.  If I walked to the front door and looked at my car, it wouldn’t show any signs of the drive to my Mom’s I took this morning.  It’s been coming down pretty good ever since I woke up.  But yesterday…yesterday, I was outside in short sleeves.  Indi and I rode our scooters.  It was glorious.  Oklahoma has been known for it’s rapidly-changing weather patterns for some time.  Will Rogers, a famous comedian/actor from the 1920s/1930s, once said, “If you don’t like the weather in Oklahoma, wait a minute.”

One of the first non-family meetings we had when we returned home was with Richard Higgs, a good friend and personal hero of ours.  This guy climbs mountains.  It was he who wrote us a letter before we started warning us that the earth was unforgiving and relentless.  When we talked about our journey, Richard mentioned a nature trail not far from the AT&T call center we once worked at, which is also not far from our home.  We took a mental note at the time.  Yesterday, we decided to ride out and have a look for ourselves.

It was a short ride.  Twenty minutes perhaps.  It was the first time that Indi and I were out and riding together, not counting the ride back from the place where we bought the scooters.  The air was warm, the sun was bright, and our smiles were wide.  There is nothing quite like the feeling of riding two wheels down the road.  The road turned into a poorly-paved country lane and we eventually arrived at the Redbud Valley Nature Preserve.  We parked and set out for the short hike.

This was the first time we’d been out ‘n about in an outdoor setting like this since Ireland; and, honestly, the first time on a TRAIL since New Zealand.  I felt strangely detached as I walked along and admired the naked trees.  Sometimes I would turn around and have a brief mental hiccup where I didn’t know where I was.  When another set of people passed us by, I half expected them to greet me in a foreign language.  Though, at the end, I was more surprised at how many people didn’t even acknowledge our presence.  In all my travels, I didn’t find any other place were two people standing next to each other were so far apart.

We got to a bench and sat for a little bit.  Below us was a river.  Above us was sky.  Around us were trees just starting to think about blooming.  My ears were filled with silence; the birds have not returned to Green Country yet.  The landscape was a monotone selection of browns and tans; the occasional lone evergreen stood out like a sore thumb.  When we started walking again, we found ourselves navigating around some modest rock formations.  When we finally snaked around back to the parking lot, only 45 minutes had passed. 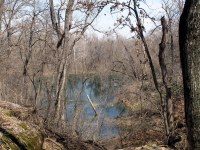 It felt longer.  It felt shorter.  It was a bizarre unfamiliarity nestled in the most familiar place I know.  The trees felt like old friends, reminding me of the drive to my grandmother’s and of throwing the frisbee in the backyard where I grew up.  I am really looking forward to getting out and walking more around here, especially when the trees start to green up and warm weather greets me when I open my front door.  I’m so tired of wintertime.