There were various times when I was traveling that I’d come across some small festival, carnival, or other gathering and think back fondly to the State Fair here at home.  It normally wasn’t a long thought, just a short “hey that was fun” kind of memory and I’d move on.  As October creeped up on the calendar, I started thinking about it more.  After everything I’ve seen and the parts of me that have changed, would I still enjoy it?  Would I see it as a fun gathering or as a commentary on my fellow Oklahomans and, perhaps, the country at large?  Would I be able to walk out of the fairgrounds under my own power?  I was intrigued.

I didn’t have a plan; I simply woke up early enough yesterday to check out what time the fair opened (10:00 AM) and had enough free time to go spend a few hours.  So I drove my pick-up to the Expo center and waited in traffic.  There were so many people, and this wasn’t even a peak time to visit.  Most of the drivers weren’t paying attention, or WERE and did everything they could to cut people off and be generally rude to get that one car-length advantage.  The young traffic workers guided me around the parking lot to the area inside the next-door horse track.  I parked and started walking.

The first guy I saw had on an anti-Obama shirt.  The first woman I saw was in a motorized chair due to her weight.  The first family I saw was full of children screaming.  I closed my eyes for a second, found my inner peace, and walked to the ticketing booth.  The ticket lady lethargically sold me a ticket and, instead of walking into the side entrance, I walked around to the front so I could see the Tulsa Driller.  On the way, I passed a mother pleading with a worker in a golf cart to take her kids up front to see the driller.  She was actually getting angry that he wouldn’t take them all up there, though the walk only took me three minutes.

I got to the front and stared up at the massive structure, adorned with a 97.5 KMOD radio station ‘T-Shirt’ made of what looked to be parachute material.  Once I was satisfied with my gawking, I went inside the main exhibition hall.  The inside of the Quiktrip Center can be summed up as such:  RVs, Hot Tubs, ATVs, New Cars, Salesmen, Vendors (there is a difference), political propaganda, and Food.  Walking the aisles filled me with nostalgia, because although everything is new, everything is also old.  Tulsa Police Dept. is always there showing off riot gear and firearms.  The back wall is lined with furniture.  The lower part of the building is teeming with people eager to show off their products.  This year there was even a cake contest!  I wandered through, looking and listening, but quickly tired of it.  I set my sights on what I really wanted to come see:  the rides and the midway. 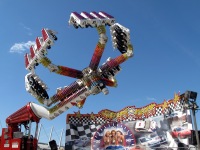 I’ve never been a big Fair Ride person.  My mother instilled a fear in me from a young age of these hastily assembled metal monstrosities and the questionable folk that run them.  I rode a few some years ago with Indi, but it was with great coercion.  This year, I was content to once again observe.  Since I had arrived at opening, not all the rides were up yet and many of them were doing their morning tests.  There’s something creepy about looking at a Tilt-a-Whirl spinning with nobody in it or watching a giant thrill ride go through it’s mechanical motions without the aid of screaming riders.  The Skyride started transporting little gondolas above me; my immediate glee was quickly replaced with a pang of sadness.  Once upon a time, the Skyride took people from one end of the Fairground to the other, depositing you in Bell’s Amusement Park.  Bell’s is no longer there, replaced with a parking lot.  My desire to ride the skyway faded into obscurity.

As I walked through the Midway, looking at the games (Everyone’s a winner!) and attractions, I noticed something else.  Many of the ‘exotic’ attractions like the “World’s Smallest Woman” and people made out of snakes and what-have-you are no longer manned by a barker.  Sure, there’s a ticket taker, but the “YOU HAVE TO SEE IT TO BELIEVE IT!” voice was coming from a recording that looped over and over again.  How clinical and disconnected.  Most of the workers were texting, anyway, and not paying attention to anyone.  Guess being a carnie ain’t what it used to be. 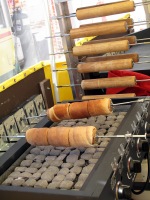 I rounded the corner near one of the food sections and my eyes lit up.  Near the ‘Chicken Fried Bacon’ was a small booth that had a sign reading, ‘Slovak Rolls’.  It belonged to a sweet Czech couple selling the same treats I had purchased in Old Town Square in Prague last Christmas.  I nearly tripped over myself jogging over there and chat with the owners for a few minutes.  The breading here is a bit thicker and, evidently, they don’t sell as well unless they fill the middle with one of various jams.  I talked about my time in Prague and bought a PLAIN one, thanking the people for bringing a piece of my past into my present.  It was highly unexpected.  And tasty.

That brings me to the food.  The State Fair is widely known for the many greasy, overwhelming food choices…and this year was no exception.  Deep Fried Butter, Cheese Curds, Corn Dogs (of course I had one of those), giant spiral potatoes, Turkey Legs, Funnel Cakes…the list is nearly endless.  I even saw the deep fried candy bars this year.  One “treat” among the others stands out to me as the most awful and unnecessary, and that is the Donut Burger. 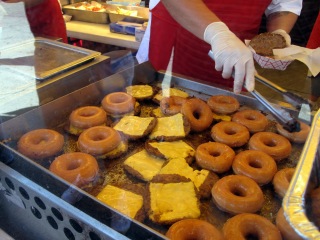 Yes, those are cheeseburgers that use Krispy Kreme glazed donuts as the bun.  No, I did not try one.  Although perhaps I should have, for posterity’s sake.  No, who am I kidding.  I would’ve gone into cardiac arrest right on the spot.

That was the end of my fair experience this year.  It was a nice few hours of people watching and marveling at my fellow Oklahomans.  There was a pretty big college football game going on at the time so the crowds weren’t nearly as crushing as I had expected.  Next time I need to bring a crowd of my own with me, if for no other reason than to assist me with the food I wanted to get, but didn’t because then…I’d have to eat it.

One thought on “Attending the Tulsa State Fair”